In late 2017, we found out that my wife Sam has both moderate rheumatoid arthritis and a Chiari 1 brain malformation. At 28, these were both rather shocking. Of course, she would tell our friends after explaining that she has a brain issue that, “At least I know why I married him.”

A Chiari 1 brain malformation is when the brain is trying to push its way down through your spinal column. This is (obviously) not supposed to happen. It manifests as regular headaches and migraines.

If this pushes 5 mm or less, the headaches and everything can be treated with meds. If it’s larger, then surgery needs to be considered. Sam’s was at 13 mm when they took the scans and larger still when she had surgery on June 21st, 2018. The craniectomy surgery involved cutting through the muscle on the back of her neck, removing a 1 by 2 cm piece of her skull, cutting open the dura (the brain bag), then patching the dura, leaving the hole in the skull, and closing up her neck. 14 staples and 3.5 inches of incision later, as well as a cool new hairdo, and she was recovering well. No more headaches (outside of me), feeling good.

We went to Gen Con, but Sam got a random unrelated infection – nothing big, but she was feeling like crap – so she stayed in bed for the con. On Sunday of the convention, I got her up to use the bathroom so we could work on packing up. I then heard her gasping for breath and forced the door open. She had gone nonresponsive. After calling 911 and dealing with all the fun that comes with that, we got her to a local hospital (remember, we were in Indianapolis, not home) and they said she had an electrolyte imbalance. They gave her some meds, watched her levels, said she had a minor heart attack… At this point, neither of us are happy with what’s being said, so we got her discharged against doctor’s orders and drove straight to Cleveland to get her to the ER here. They admitted her, checked her out, but said overall, she was alright aside from some vision issues, which they didn’t seem particularly worried about. They said if it continued, get it checked.

She had a follow-up appointment for the first surgery with her neurologist shortly after this. He noticed the vision issues as well, suggested she get an eye exam done.

The following Monday, we managed to get squeezed in. As she was getting her exam, I went out to the car to get the fax number for her neurologist so he could have the results sent to him. The next thing the eye doctor said was, “We’ve called ahead to the ER, they know you’re coming.” Turns out her vision issues were due to hemorrhaging and swelling of the optic nerve in both eyes. So we rush to the ER, they recognize us when we get in, and after a few preliminary tests, Sam was given the option – take these meds that may take 6-8 hours to kick in and relieve a bit of the pressure or we can do a spinal tap now and it should relieve most of the issues almost immediately. She opted for the spinal tap.

Most folks walking around are at 8-15 mm of mercury for pressure in their spines. Anything under 20 is acceptable. She was at 54.5. Highest the doctor had ever seen, and almost overflowed the manometer they used to measure the pressure.

30 minutes later, she had almost normal vision again. They got her to a room and after a few more days, they concluded she has Idiopathic intracranial hypertension. In layman terms, this means she has too much fluid in her brain and they don’t know why. They set up another brain surgery to install a shunt and a tube to act as an overflow valve for her spinal fluid. This surgery was performed by the same surgeon as the first surgery. Another bunch of hair lost, an incision that looked like a zombie bite, and some bruising, but it was a success. I joked that she needed the second surgery like another hole in the head, which she begrudgingly laughed at. 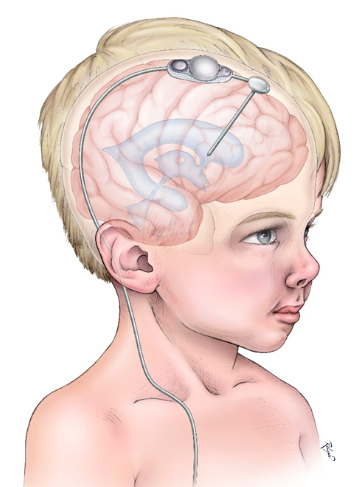 The quick run down for the next few months is as follows:

Sam was driving to a sheep and wool convention in New York and hit a deer in rural New York. She didn’t total the car, but she came close.

We went to BGG.Con shortly after this, came home, went to get our car after they had had it for over a month just to find out they hadn’t 100% completed repairs and there was an issue with the serpentine belt.

After we got our car back, all shiny and mostly new, we drove to PAX Unplugged where a rock hit the windshield.

I wasn’t feeling the best, as I had gotten strep throat in November. Then December. Then January. Then February. In March, right after Unpub, I had a tonsillectomy.

As of a few weeks after Origins, nothing of particular note has happened and everyone is relatively healthy, so I think the curse has been lifted or at least has moved onto someone else. Sam is still on a bunch of different meds, and she’ll deal with both the RA and the brain stuff for the rest of her life, but she’s doing well.