Table For One – Flip City

Flip City was originally produced in Japan as Design Town. It’s a game that caught my eye when I first saw it on BoardGameGeek and I’m glad that I ordered a copy. Let’s take a look at the solo and multiplayer games. 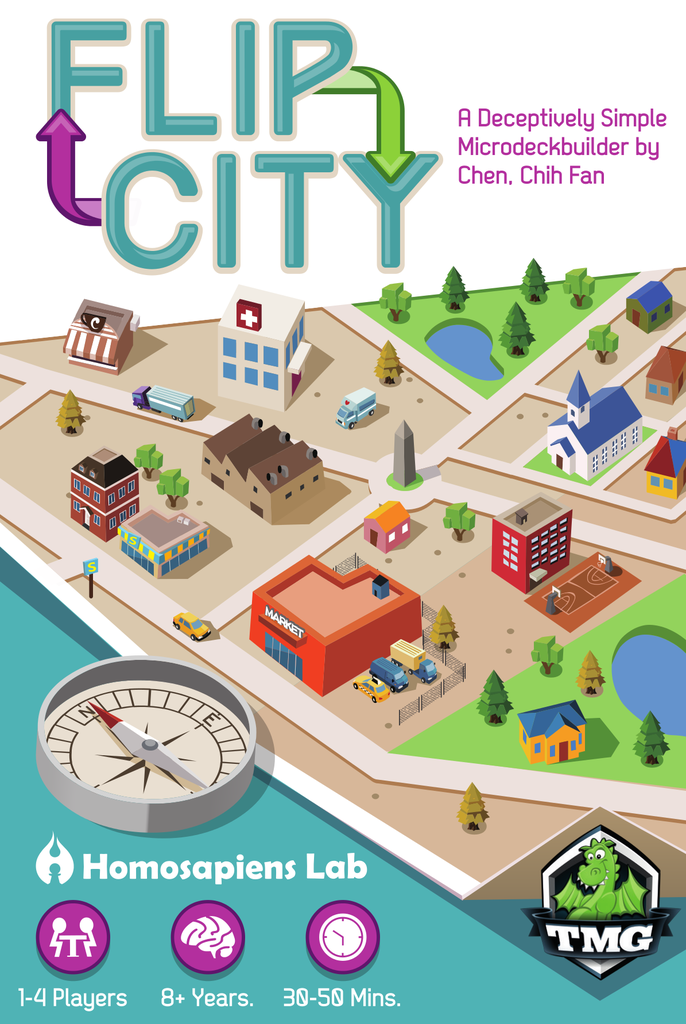 Flip City is a combination of a push-your-luck and deck-building game. The goal of the game is to have eight victory points in play at one time. The different cards in the game provide points, income, and frowns, and some special abilities. Each card is double-sided and provides different things for the player when played. This is a bit strange at first, especially being able to see the next card in your deck, but it really makes the game unique.

For example, the Residential Area is one of the starting cards. It provides one income, one frown, and when is on top of the player’s deck it has to be played. This makes the Residential Area card a problem, as when a player has three frowns in play, their turn ends immediately and they do not get to spend their income. 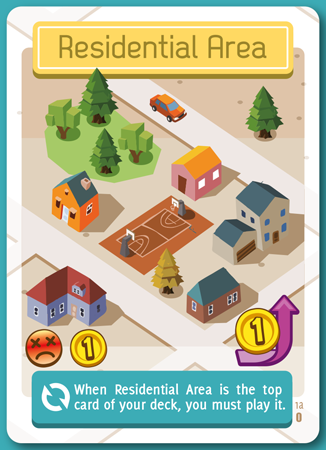 Playing cards from the top of the deck into play grants these bonuses or detriments. After choosing to stop, a player may spend their gained money in one of three ways: Buying, Flipping, or Developing. Buying is the usual action of paying for a card from the supply and adding it to your discard pile. The A side of each card has a cost to flip it over. If a card is in your discard pile, the flip cost can be paid to flip the card over to the B side for the next time the card is drawn. Developing is the combined action of buying a card and flipping it into your discard pile. The timing of flipping and buying and knowing when to do each action is one of the key features of the game.

The solitaire mode is played with the standard cards and setup, except it limits the available Hospitals, Convenience Stores, Factories, and Stadiums to only four each. These 16 cards are available for purchase, but each time the player shuffles their discard to refresh their deck, one of the cards from the supply have to be removed from the game. This acts as a timer as well as a dwindling set of resources. Games can be played in about 20 minutes and can come down to the wire.

The multiplayer game is the same as the solitaire game with more cards in the general supply. One of the downfalls of the multiplayer game, especially with the full complement of four, is that there is a small amount of player interaction. This is mostly limited to all players buying from the same supply and a small number of cards that allow you to give some of the cards to other players to slow down their decks. This game is mostly multiplayer solitaire, which makes the game slower, but still fun.

While the multiplayer game can bog down with long player turns, it is still an enjoyable game with other players and I feel it is an excellent game to try out for gamers new to solitaire titles. The art is eye-catching and the way that the cards line up is a very nice attention to detail. Overall, I think Flip City is an interesting cross between a puzzle and a game and that it works well as a solitaire title or a multiplayer experience. I really hope that Tasty Minstrel Games will bring the Reuse expansion out soon to expand the number of buildings in the game. 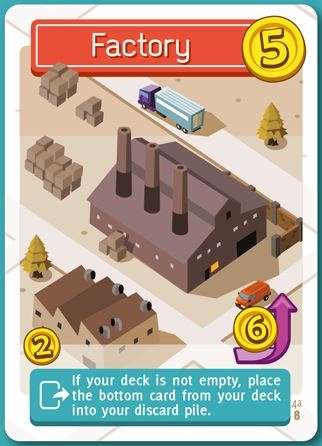 For the original game, you can order it directly from the Factory in China by visiting this page. You can also check with your Friendly Local Game Store to see if they’ll order the game for you, cause supporting your FLGS is important!