I had some plans for my boardgaming in 2016. Some of them were successful, but others weren’t. I’ve made even more plans for 2017 with a bit more focus this time. Let’s talk about the plans for the new year.

In 2016, I wanted to complete two goals. One was playing 100 games that were new to me at least once. I did that with no problem, playing 147 titles that I hadn’t played before. Many of these were new releases, but some were classics or just games I had missed.

The oldest modern game that was new to me was Monopoly Express. This push your luck dice game with a Monopoly theme is quite fun. I didn’t do well in any of the games I played of it, but I still enjoyed it. Of the new plays, nine of the games were in the top 100. 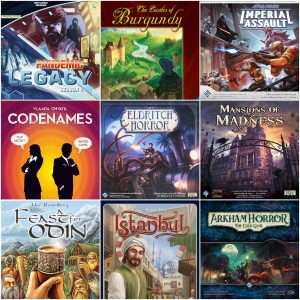 Pandemic Legacy: Season 1 is an absolute blast. It pulls all of the players in and keeps them guessing as to what is coming next. We recently finished and had a great time playing this game. 18 total plays of the game and we can’t wait for Season 2.

I finally played The Castles of Burgundy, a favorite of several of my friends. It’s a point salad with every action resulting in points. I enjoyed the game and want to try getting it to the table again, though the card game is also enjoyable.

I’m more of a Trekkie than a Star Wars nut, but I have really enjoyed all of the plays I have of Star Wars: Imperial Assault. The story and the tense moments make it a great time. I do wish that Fantasy Flight would print corrected cards for the ones with typos, but it’s a minor complaint.

Codenames is a cute party style game that was a great way to introduce my coworkers to the world of hobby games. While party games aren’t something I play regularly, this game is a great way to help expose non-gamers to something that they haven’t seen before.

Eldritch Horror feels like Arkham Horror but cleaned up. I still enjoy Arkham, but Eldritch makes the events of the game feel more tied to the Elder God who’s trying to rip apart the world. I also like how much quicker the game feels, despite it still not being short.

Mansions of Madness: Second Edition fixes almost all the issues I have with the original design, but it introduces a couple new minor issues. The new version makes the game completely cooperative and reduces the setup time immensely. However, to play the game now, an app that runs on your phone or computer is required. The app also doesn’t have an undo button and sometimes the interface is not 100% intuitive, so it can lead to frustrations. Even with these issues, the game is still one I enjoy playing immensely.

My wife got to try A Feast for Odin at BGG.Con and absolutely loved it. I found a copy at an FLGS and picked it up. It’s a lot of rules and a lot going on, but once it’s all laid out, the game really makes sense. The whole experience is intimidating, but is a wonderful game once you jump in.

Istanbul is a game with a modular board, meaning replayability is never an issue. The strategy around moving between the stalls and beating your opponents to certain stalls is key, but there is still luck and chance in the game. A fun game that I want to get to the table again this year.

Arkham Horror: LCG is a recent favorite, despite not being a fan of RPGs. The characters feel unique, the stories in each scenario keep the players interested, and the replayability is impressive. I have really enjoyed teaching it and seeing the story play out. I just wish there were more stories to play through. 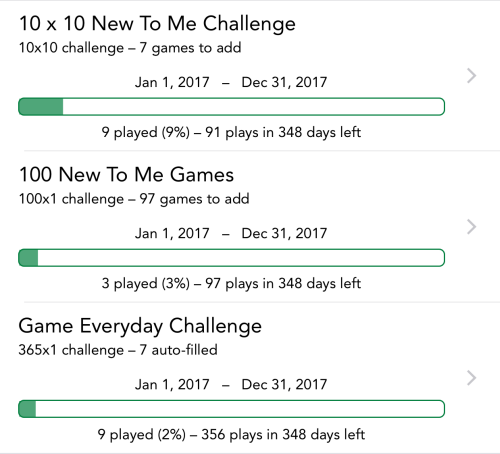 In 2017, I am planning to complete these three challenges. The 10 x 10 New To Me Challenge is meant to help me play not just new games, but those games multiple times to get a real feel for them. The 100 New To Me Games Challenge is to get me to play a bunch of games I haven’t played before. These can be newly released games, but counts any games I have not played before. I am also pushing to play something every day, even if it’s something simple and solitaire or on my phone with another player.

I’m also starting part-time at my Friendly Local Game Store as an Event Coordinator. I’ll be helping run organized play events. I’m also going to help run a weekly “Learn to play” night where players can check out games that they haven’t played before.

My wife and I are also running the Etsy shop and it’s going very well. Lots of happy customers and lots more bags to make!

So 2017 will be busy. Very busy. And I’m sure that there will be more happening that I’m not planning on, but that’s part of the fun!