January 2017 has come to an end and I managed to play a game every day. I’m behind on my 100 new-to-me challenge, but things generally start slow for me. Let’s look at what I’ve been playing. 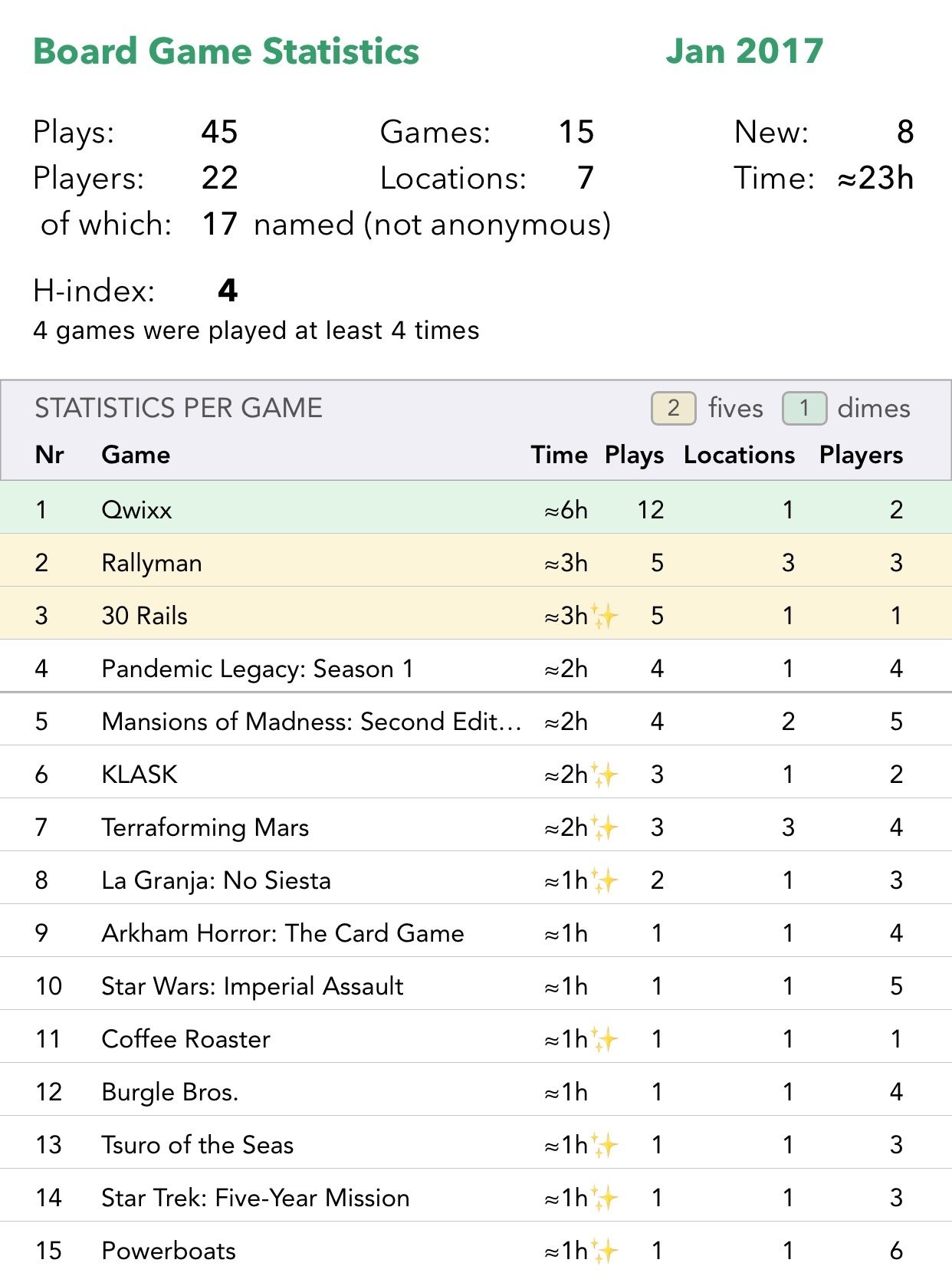 I use the BGStats app on my iPhone to track plays. Android users rejoice, for a version is being worked on for your phones as well! I got in 45 games in 31 days, which I’m pretty happy with. Let’s talk about the games that got played at least twice.

Qwixx was played exclusively on my phone in January. While there are a few things I’d like to see and one bug that I found, it’s a pretty good implementation of the game. You can check it out for iOS here, and I think it’s well worth the $4. It can also work as a digital score pad or a solitaire mode. The digital dice seem to be a bit strange, but maybe I just don’t get that part of the app.

Rallyman was a new-to-me game in 2016 and I’ve really enjoyed it. I taught it to some friends and played in the International Solitaire Games on Your Table Rally Association (ISGOYTRA) challenge. The challenge is set up as three races and you have to do your best, then report your times. Once the window for reporting times has closed, rankings will come out. It’s a very cool idea to keep this game on the table.

30 Rails is a free print and play game that only requires two dice to play. It’s a fun solo challenge that requires some luck and some careful planning. I really enjoy it and think it’s well worth the ink to print out a copy.

Pandemic Legacy: Season 1 has finished! We finished the campaign and while we didn’t do particularly well when it came time for scoring, we had a great time. We’re all very excited for the second season, but Seafall may fill the Legacy gap in the mean time.

Mansions of Madness: Second Edition is so much fun. I loved the idea of the original one versus many design, but the new cooperative model where all of the players are competing against the app makes the game much more fun. The game changes up session to session, keeping even veteran players on their toes. The Insane cards which may change a player’s goal are a wonderful touch.

KLASK is a manual dexterity game that you can get at Target. I really enjoy it and it feels very accessible. I can see this being a great game for work events and for families. It’s also one of few dexterity games where I win over my wife!

Terraforming Mars is an engine building, planet working game where players are trying to raise the temperature, oxygen levels, and oceans on Mars to make it hospitable. It’s a fun game, but I think I prefer it with the lower player counts so far.

La Granja: No Siesta is a dice rolling game where players draft dice to get resources. Those resources can be used to fill carts, hire helpers, or do other tasks. It’s a fun roll and write game and the option of a solitaire mode adds just a bit more to the game.

For 2017, that’s 31 days and 15 different games played! I’m looking forward to February and some of the new releases coming this year. If you have any game suggestions or questions about anything I’ve played, let me know!