Gaming Purr-fection? – A Review of Calico

Calico is a game about making quilts and attracting cats to lay on them. It’s a very casual concept, but that doesn’t mean it’s a casual game. Playing one to four players in thirty to forty-five minutes also means it fits nicely into most collections. Does that mean this is a game worth getting so your cats can sit in the lid? Let’s check it meow-t.

Calico is coming to Kickstarter on October 8th. Flatout Games sent me a prototype copy of the game to check out. The game was designed by Kevin Russ and with art by the very talented Beth Sobel. The game is the first for both the publisher and the designer.

While not indicative of the final version, the prototype is very high quality. The art is gorgeous, and the icons, colors, and patterns are all very authentic to actual fabrics, but they’re also color blind friendly with icons on all of the components. This is a great touch and allows the game to be played by everyone. 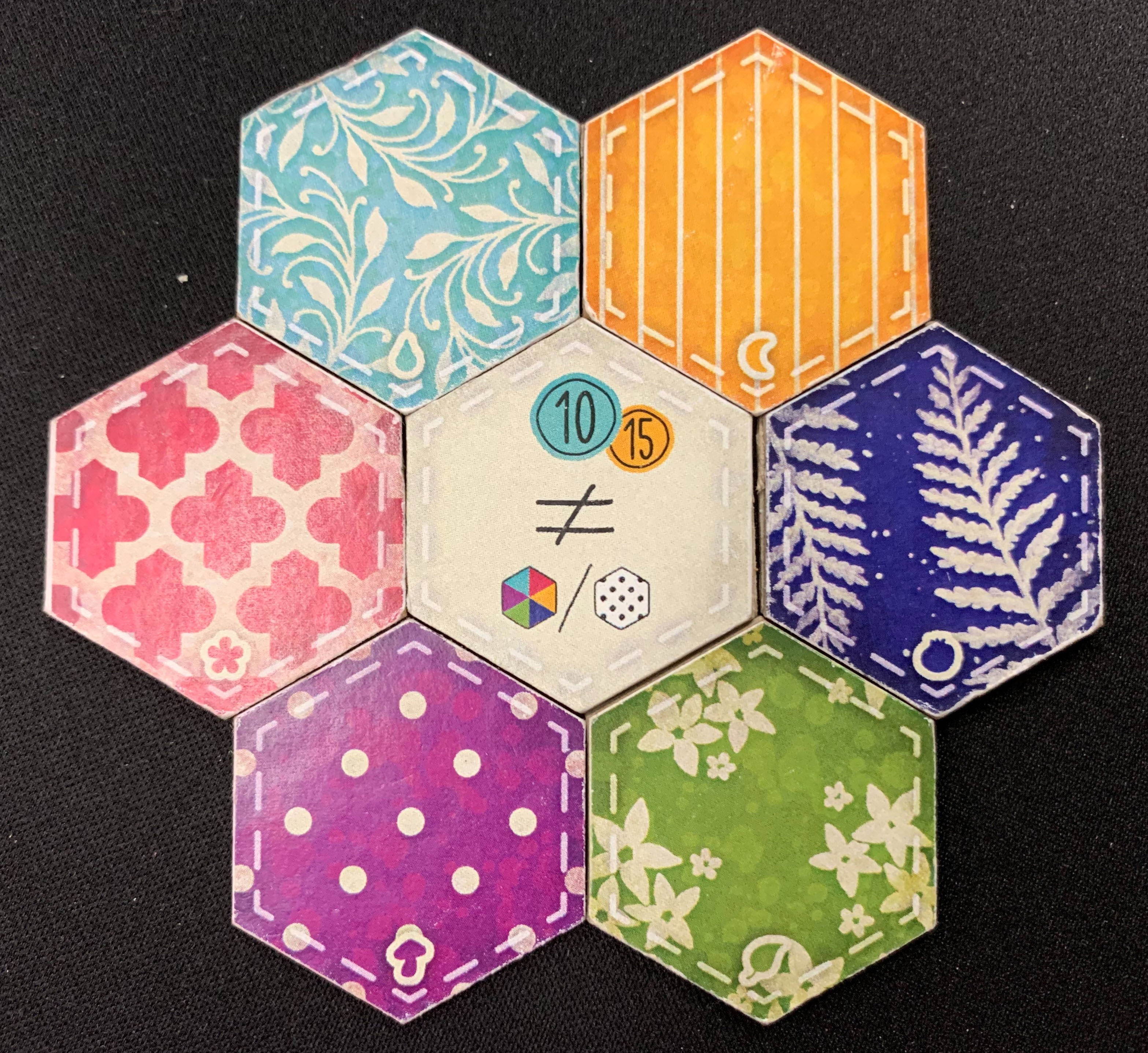 The rules for the game are simple and approachable. Each turn, you’ll play one of two tiles from your hand onto your quilt board. You can place the tile anywhere on your board, so you don’t have to start at the edge. Then you’ll replenish the empty spot in your hand with one of three face up tiles from the supply. Finally, you refill the supply with a random tile from the pile. We used a bag instead of piling all of the tiles face down, but that would work just fine.

For scoring purposes, there are three ways to earn points. First are the Design Goal tiles. In the standard setup, each player starts with the same set of goal tiles and will place three of them onto their board during setup. They will earn the player points if the design goal listed on each is met. For example, if the tile reads AAAA-BB, the goal is for the six tiles around the goal tile to be in sets. A set can be made up of either color or pattern. To score the AAAA-BB tile, you could use four yellow and two red tiles or four striped and two vines. Each Design Goal tile has two scores – if you complete the goal with color or pattern, you’ll get the lower score. If you complete it with both color and pattern, you’ll get the higher score.

Second are the cats. At the beginning of the game, you’ll pick three cats and give them each two patterns that will attract them. Each cat will show a requirement to be attracted to your quilt. For example, to attract Thimble to your quilt, you’ll need three or more of either pattern in a group on your quilt. If you do this multiple times, you can earn multiple Thimbles, which are each worth three points. Each cat will have a requirement, such as size of group or layout of tiles, and will randomly have two patterns assigned to it at the beginning of the game. 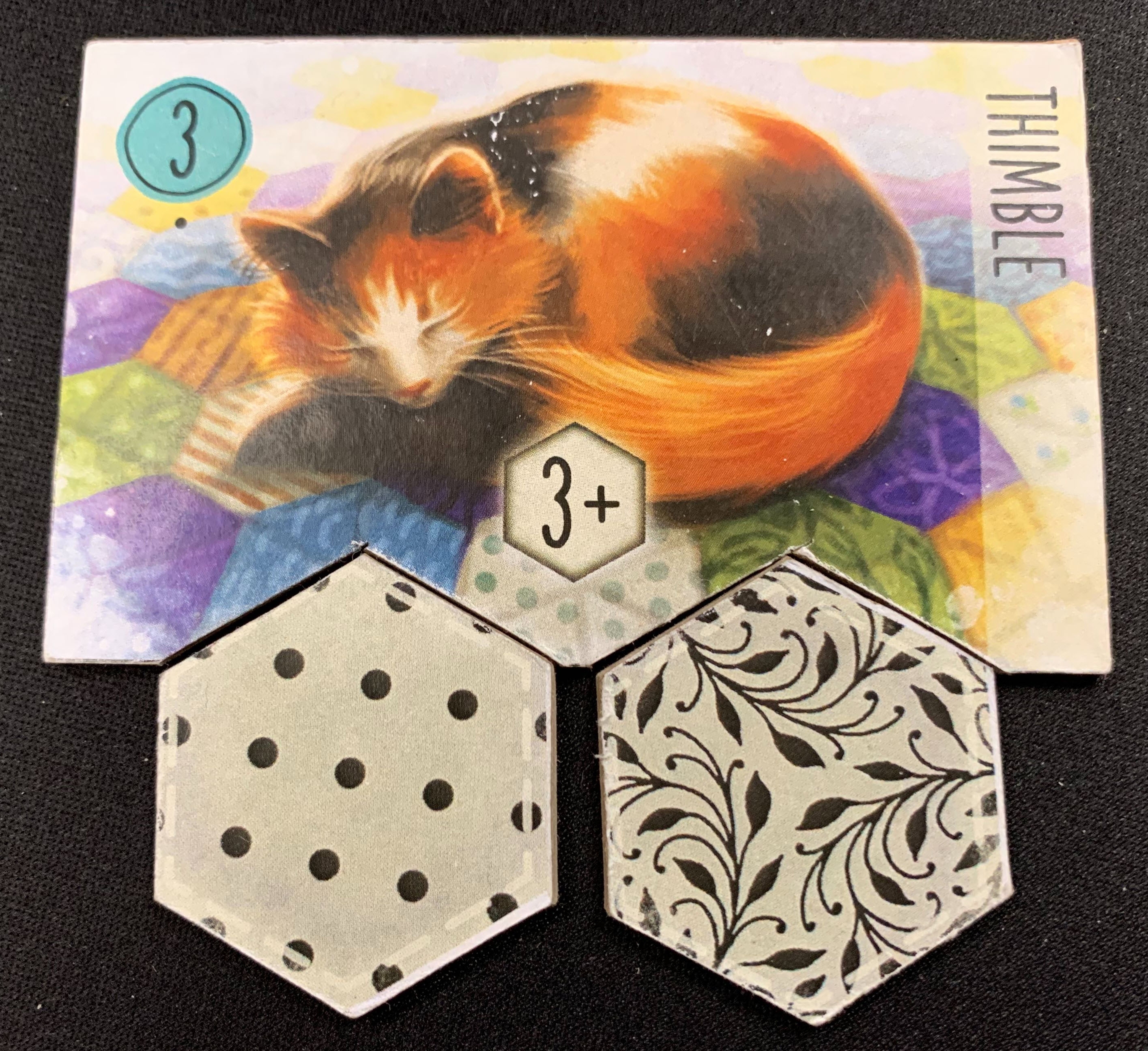 Third are the buttons. Each time three or more tiles of a single color are placed together, that player will earn a button of that color. If a player manages to get a button of each color, they’ll also earn a rainbow button. A player can earn more than one button of each color, but in order to get the free rainbow button, each of the six colors needs to be claimed. Each button on a player’s quilt (including the rainbow) at the end of the game is worth three points.

Something to note is that each player’s board has a frame of tiles that can be used to attract cats or claim buttons. This gives each player a direction to start in and helps players not feel lost when they start the game. These frame tiles can be used when getting cats or buttons.

There are a number of ways to play Calico. Aside from the standard setup for two to four players, there is also an advanced setup, a family variant, a solo variant, and a two player lower variance variant. With 12 different cats in the games and each player board being slightly different, it’s almost impossible to play the exact same game twice. However, no matter which variant is used, the rules are similar enough to not feel like you’re learning a new game.

One of the potential issues with this kind of game is that it feels partially like a puzzle. This isn’t a bad thing on its own, but it can make the game feel like multiplayer solitaire. It can also lead to analysis paralysis if a player is trying to figure out the “perfect move” which can result in player turns taking far longer than they should. In the games I’ve played, this has come up occasionally, but only once or twice for a given player in a single game. Most of the time, each player can plan their next move during their opponents’ turns. The two player lower variance variant of the game is one I would highly recommend if you are playing with only two players or if you are playing solo. It helps guarantee that each of the 36 different tiles will be seen during the game, instead of potentially missing out on one combination.

Overall, I think Calico is wonderful. It’s simple enough to teach to non-gamers, but still interesting enough to keep hobby gamers interested. It’s colorful and eye catching while still making sense and being a solid game. The art is gorgeous and the game play is fun. It’s not the most interactive game, but there’s a subtle strategy of which tiles to take to either help yourself or hurt an opponent. I think Calico is a great game that will be a hit with families and gamers alike. It goes up on Kickstarter tomorrow. If this seems like something you might enjoy, you should give the project a look. 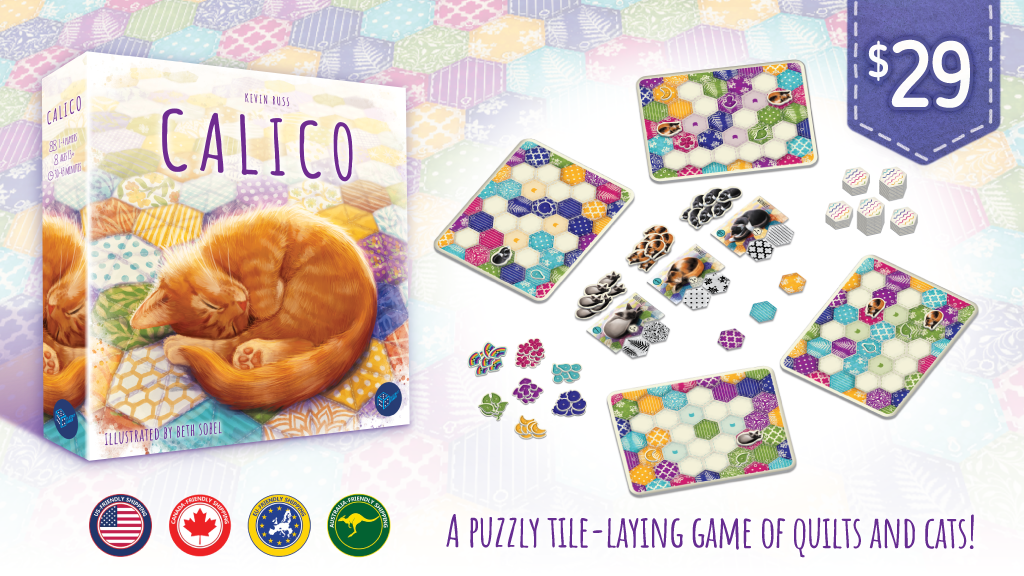