In an effort to keep myself honest about acquisitions, progress on my 10 x 10 and 1 x 100 challenges, and help me post more, I thought it would be a good idea to talk about January in terms of gaming for me. Hits, misses, and discussions!

Let’s talk about what games got to the table. I use an iOS app called Board Game Stats to help me track my plays on my phone. It’s a pay app and there isn’t an equal for Android that I’m aware of, but I really like this app because it helps me track my plays immediately after finishing the game. 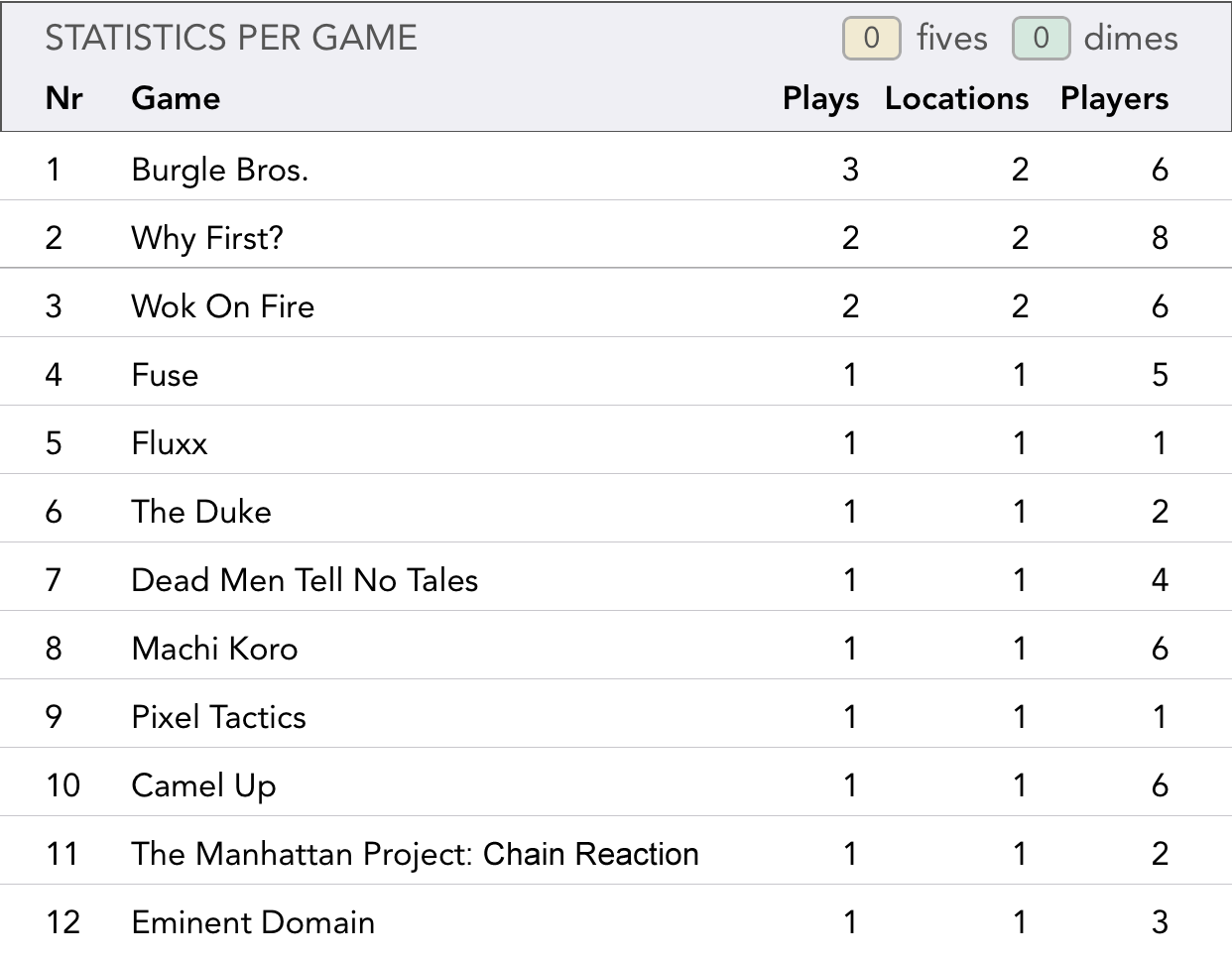 Burgle Bros. was a big hit in January for a few reasons. First, it helps that the game came in from Texas where I got it at BGG.Con. It’s a great co-op game that is not easy even for experienced players. It feels like a heist movie translated wonderfully into a board game. If you enjoy co-op games or movies like Ocean’s Eleven, it’s worth checking out.

Why First? is another great game, though it’s far from a co-op. The goal of the game, like most games, is to win. But the player who wins is the one with the second highest score at the end of the game. If this change wasn’t enough, a player only scores points when they come in second in a round. Why First? is a shining example of a game with an odd hook that stays fun even after repeated plays.

Wok on Fire is an upcoming Kickstarter from Green Couch Games. It combines manual dexterity and set collection where players are acting as chefs, preparing food and hoping to complete cards into meals worth points. Flipping cards and hoping the good ones turn face up for collection. It’s a great filler game that is goofy fun for everyone.

For the 10 x 10 Challenge, I haven’t made any progress. I’m wanting to play 10 games that are new to me 10 times each this year. Given that it’s as early in the year as it is, I’m not really worried about this one. Most folks who do a 10 x 10 Challenge pick their games ahead of time, so I’m not keeping up with the pack with this one.

For the 100 x 1 Challenge, where I want to play 100 games that are new to me this year, I worry that I am very behind. I’m only at five games that fit those criteria. The good news is that I have lots of games to play, I just need to find time and players to actually enjoy them.

I managed to not buy any games in January! I got review copies of some games, some prototypes, some previously backed projects from Kickstarter, as well as games from BGG.Con, but no money came out of my wallet to get games for a whole month! Technically I did order some stuff from DriveThruCards, but those were a late Christmas present from my wife, so… We’ll just not count those.

So the plans for February are more demos, more games to the table (both new and old), and more reviews. All in all, not bad so far, but let’s keep it going!