Someone set us up the bomb – A preview of Chain Reaction

Minion games has done a lot of fun games lately and they have a new game about making bombs called Chain Reaction available for backing. Is this game really the bomb or just a dud?

Chain Reaction is a card game inspired by Manhattan Project, a game of theirs about developing nuclear weapons. While I haven’t played that game, I was really curious about Chain Reaction. The Kickstarter describes this as a, “Simple hand efficiency card game using dual-purpose cards in a quick and exciting race to build bombs.”

I really enjoy games that have multi-use cards, such as Race for the Galaxy and San Juan. This game uses the cards in a different way than those. Each card in the game can be used either as a source of labor or an Industry card that uses labor and outputs other labor or other resources. For example, let’s look at this card: 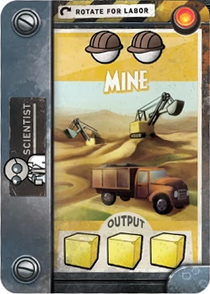 This Mine card can either be used for labor, where it would supply one Scientist. If the player can get two Engineers through other cards, they can take three Yellowcake from the supply. 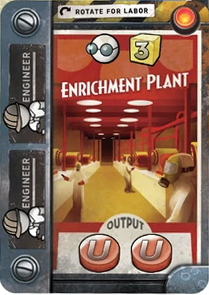 This Enrichment Plant can either be used to generate two Engineers or can take a Scientist and three Yellowcake to generate two Uranium, which is used to actually make the bombs which are worth points in the game.

Players have a hand of five cards that they can use on their turn to generate Yellowcake, Uranium, or Bombs. Any cards used get discarded at the end of the turn. This limit on cards makes the game a little easier to learn and makes each turn faster, as there are only so many ways to use the five cards. Any cards not used can either be kept for the next turn or discarded in hopes of better cards. The only things a player can keep from round to round is Yellowcake, Uranium, and Bombs.

Players also have access to a number of Landmarks that are not efficient, but are there as guaranteed ways to generate Scientists, Engineers, Yellowcake, and Uranium. These are better used as last-ditch efforts, but they are useful when you can’t seem to draw a certain kind of card.

There are also a few cards that are more interactive but can also be punitive to other players. 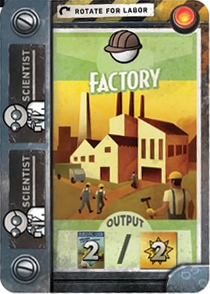 Like the other cards, this card can act a source of labor for two Scientists. If an Engineer is supplied through another card, this allows a player to either draw two more cards or force another player to discard two cards. These cards are very beneficial for a player to help them catch up or help restrain a player who is in the lead.

Though I haven’t played the other Manhattan Project games, this was very easy to pick up, easy to teach, and a lot of fun to play. It’s a quick game and is playable with up to five players or a solitaire version exists where a player aims to get a high score. I am backing the deluxe version of the game which comes with wooden bits for the Yellowcake and Uranium. A tuck box version with cards for the resources is available from $15, or a simple print and play version option exists for only $2. If you like quicker cards games with a bit of thinking and math to them, this is definitely one that you should check out.