This or That? Digital Boardgaming Options

With the world being, well, the way it is right now, online board gaming has been getting a lot of focus. I’ve been playing a good bit on a variety of platforms and want to talk about which one is best. 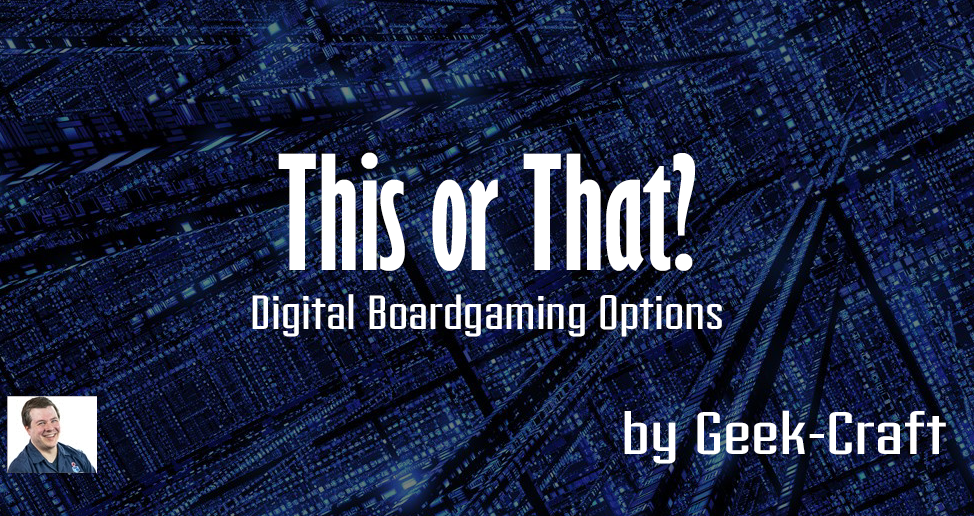 The main options I’ll be talking about in this post are BoardGameArena, Happy Meeple, Tabletop Simulator, and Tabletopia. I’ve played several games using each of these services, and each does something well but also has room for improvement. I’m going to go through each option and talk about the good and the bad. They’re in alphabetical order cause they needed to be in some order, why not alphabetical?

BoardGameArena is a freemium style site with a variety of options. They offer a very structured interface that has a bit of a learning curve. I very much suggest giving a game a play or two before you try to play competitively on the site or playing a digital version of a game you already know well. They offer real-time games as well as asynchronous, which is a nice option. You can easily see what moves have occurred since you were last in the game, which is really nice for the games you can walk away from and forget what was going on. You can also leave private notes for yourself, like strategies you’re considering or notes of what your opponents have done. You can access 90% of the site for free, all it takes is creating an account. For the remaining 10%, which includes a small selection of games (7 Wonders Duel, Kingdomino, Sushi Go, and some others), access to betas, and a few preference options, you can pay $24 per year. It’s not expensive, but also not necessary. If there’s a game you’d like to try that is premium but you aren’t a premium member, as long as one person in the group is a premium member, you can play the game. If you don’t know how to play a given game, they link rules but don’t actively teach how to play a given game.

For the number of games that they have and the features that they offer, I feel the cost of the upgrade is worth it. I would rate BGA a solid 8/10.

Happy Meeple is a cute site with a small selection. They offer games that are one or two-player, and they have various AIs in place for the two-player games. You don’t have to have an account to play, as long as the other player does and shares a link with you. They offer some games that I’ve not seen in other places, such as Raging Bulls and Circle the Wagons. They are very good at teaching games and leveling up your skills. It’s easy to see how you rank against other players on the site, even if you never interact with them. That all being said, Happy Meeple is a weird site. They have an odd achievement system that I don’t entirely understand. They also have an odd resource management metagame that I don’t fully get. But you can play the games they offer and ignore those parts easily. My main complaint is that even if a game offers more than 2 players, it is capped at two.

They may not have as many games as other options, but they offer a solid solo selection and teach the games, helping you actually play the games you want to try. For the solo games, I’d rate it higher, but overall, it’s around a 6/10.

Tabletop Simulator is arguably one of the most well-known options for digital board gaming. This is something you can get through Steam and while it’s frequently on sale, you usually end up paying $10 to $20 for your own copy. One of the best things for Tabletop Simulator is that it’s easy to add your own games to the platform. You can easily set up a game of your own design, invite your friends to play, and get it up running fairly quickly. However, this is a double-edged sword. If you aren’t familiar with how to do things in Tabletop Simulator, it’s not the most friendly to figure things out when playing, let alone when uploading your own design. From a publisher’s standpoint, there are a lot of unauthorized versions of games out there, which is its own issue. That being said, some publishers have made or approved versions of their games being listed in Steam under the workshop, giving everyone access to a large number of games. Publishers can also offer their games as DLC, which costs a bit more but offer very professionally created digital versions of board games. You can even get scripting where it will automatically set up a game and have everything ready for the players. That all being said, it’s best to know the game going in or have a teacher in the game if you are looking to learn it. Tabletop Simulator is not so much a game engine as it is a physics engine that’s been tailored to tabletop games.

Tabletop Simulator can be fiddly, and I’ve seen a lot of bugs and glitches, but overall it’s one of my favorite ways to play games online. It’s not perfect, but it offers one of the most realistic approaches to digital board games that I’ve seen. I’d rate Tabletop Simulator at an 8/10.

Tabletopia is likely the next best known, and it offers a freemium experience as well. Many of the games can be played by anyone who gets an account, but you can also pay to get access to more games. There is an application, but I’ve found the web interface to be much more stable. They offer a closed set of games, which means that if you see a game on the site, it’s an official implementation. This is nice because it offers a lot of well-produced and accurate digital versions of games. However, this also means that playing random games that you don’t see isn’t an option. There can be scripts in these games, which can set things up for players, but again learning is best from someone who knows the game. This is more a sandbox where you can play games if you know the rules because it won’t enforce them. One benefit of everything being stored in one location means that everyone has access to the same games. As with Tabletop Simulator, it has a learning curve that is not the most friendly. You can publish games to the site, but there are several requirements to get your game listed publicly. However, publishers can add and remove their games at will, which results in a lot of options for digital conventions and events. If a game isn’t public, someone who has the behind the scenes link can invite others, which is useful for private games.

I’ve seen glitches and when the servers are busy, it can really crawl, but for professionally made games, it has no equal. As long as you can deal with the laggy interface at times, it’s a very good option. 8/10.

So, overall, there’s not a single winner. Each of the above options has solid reasons to use it and things that other options do better. I think of it a bit like current video game options – if your friends play Xbox, you’ll want to get an Xbox. If they play on Playstation, you’ll want a Playstation. If they play on Switch, you’ll want a Switch. Each option has exclusives and many games are offered on multiple platforms with different implementations. Likely not what you want to hear out of a review, but the best way to figure out what you enjoy best is to try them all.

That being said there are options out there that I haven’t done much playing with that I know exist. Yucata is a great site for gaming, though it is very euro game-centric. Boiteajeux has the GIPF series and some heavier titles. BoardGameCore has only a few titles, but they’re all Splotter games, which have a certain charm (if you’re into them). Codenames has its own site, and it works great, but it’s only for Codenames. And I’m sure there are other options I’m not familiar with, so please tell me about them!

That being said, if you’re looking to learn about the options and explore them, I’d love to chat with you and play a game or two. Reach out and we’ll set something up!