April in Review – What a month!

April was a busy month due to Unpub, the first convention of the year for us. On top of that, we’ve tried to play more new-to-us games, leading to 32 different games being played. It was a busy month, so let’s look back at April in review.

The most played item in April was “Unpublished Game,” which is a catch-all for any games that are being worked on. You can see what games those plays represent by reading the Unpub post. 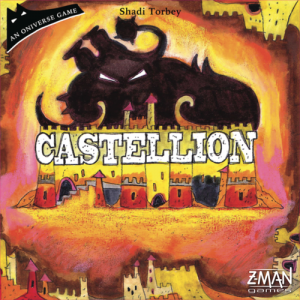 Castellion is the latest game in the Onirim series. These games are all designed as solitaire games that also play with two players. Castellion feels like a cross between Tetris and a puzzle. The goal of each game of Castellion is different and is based on the goal cards drawn at the start of the game. These will indicate how many vertical lines, horizontal lines, and squares of matching tiles need to be present at the appropriate time. The first game feels a little clunky, but when the full rules are in effect and the player gets to use each factions abilities, the game really shines as a puzzle that’s not easily solved. I played this game five times, back-to-back, and I lost every single game, and I enjoyed each one. The game isn’t about winning so much as it is seeing how well you do and how you can adapt your strategy for the next play. If you enjoy solitaire games, Castellion is certainly worth a look. 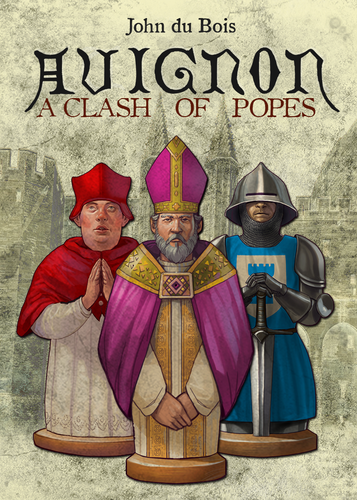 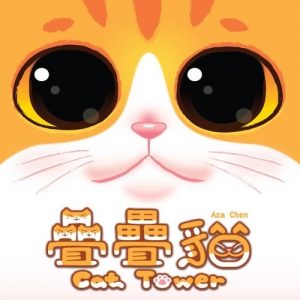 I suck at dexterity games, but I still enjoy playing them. Cat Tower is a very cute game about stacking cats to reach food on the counter. Ridiculous premise aside, the game is about rolling a die and following the action it shows. Sometimes this is adding one or two cats to the tower yourself. Other times you can hand a cat to an opponent and make them add it to the tower. Finally the Catty Fatty side adds a flat cat to the tower and has the player draw a token which will have an effect on the game. It’s a very light and silly game, but it’s fun to play and results in laughs when the cat tower sways or falls. It plays better with more players and I really want to see how it works with the full complement of six players. 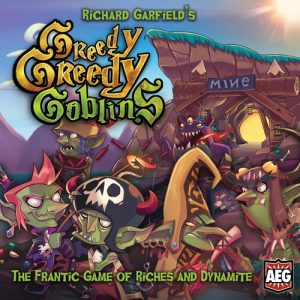 Greedy Greedy Goblins is a real-time game where players are trying to collect shiny objects from the mines around the table. As we all know, dynamite will certainly help with extraction of these shiny objects, but too much dynamite results in paying for the goblin’s health care bills. Players will pick up tiles in real-time and place them face down into any unoccupied mine on the table. Putting a little dynamite can double or triple your score, but three or more dynamite and the mine now costs the player five points. There are also Minions which can grant bonuses and Monsters the eat gems and gold. It’s a slightly silly game, and if the players don’t pay attention, one player can run away with it, but it’s fun to see which mines will blow up and which ones will be worth the most money. I do wish the game came with a denomination of coin different from the 1’s and 10’s and the player aides could be better, but it’s a fun game and it usually attracts a crowd. 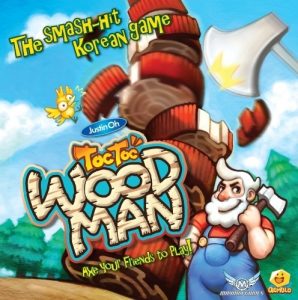 Click Clack Lumberjack, also known as Toc Toc Woodman, is another manual dexterity game that got played a bunch in April. Players use a plastic axe to push round wood tokens in the stacked tree to try to get the bark to fall off of them. Each piece of bark is worth a point, but each trunk core costs the player five points. Each turn gives a player two swings at the tree and the game continues until all the bark has been collected. It’s a simple game, but it’s actually pretty fun. I didn’t do well, as it’s another dexterity game, but I enjoyed myself while playing. 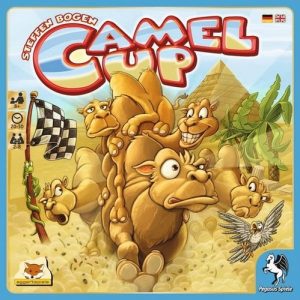 Camel Up (Not Camel Cup, as you might read from the box) is a game about betting on racing camels. The dice are stored in a large cardboard pyramid and it has a rubber band trigger to release one die at a time. Could you use a cup and do the same thing? Sure, but it wouldn’t be as fun. The camels stack up and when a lower one moves, it carries the rest with it. It’s a simple game that plays up to eight players, though I think the max I’ve ever played with is five. I enjoy it as it’s easy to teach, fun to play, and a nice light game that still has some strategy to it. It’s a little long for a standard filler, but it’s still a great game and one you may want to check out. I just got the expansion which makes it work with up to 10 players and adds a few expansion modules that I can’t wait to try. 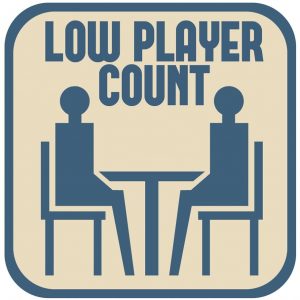 Aside from all the gaming, I’ve also been enjoying a new-to-me podcast called Low Player Count. The guys who run the show talk primarily about one and two player games, but they do get off on tangents and talk about many aspects of gaming. There are a variety of topics covered, from mini-episodes focusing on one game to hour-long conversations about what makes a certain mechanic fun. A recently released episode starred Rodney Smith from Watch It Played and I found it really interesting an informative. I’m usually the person teaching the games I get to play, and Rodney and the Low Player Count crew talked not only about good ways to prepare for teaching a game, but also the responsibilities as a learner. If you enjoy teaching games and want to get better at it, or you have someone in your life who teaches you frequently, you should give this episode a shot. Maybe someday I can be on the show… (Hint, hint guys!)