Artichokey – A review of Okey Dokey

Okey Dokey is a small cooperative game where players are organizing animals playing instruments to do a performance. Should you give this game a chance, or just say, “Later, alligator”? 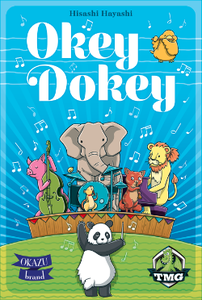 Okey Dokey is a fully cooperative game that has players trying to play cards in a particular way. Over the course of the game, players need to play 10 cards each into 5 different rows. Each row can only contain one color, and each card must be higher than the one before it. For example, if the Red 4 has been played, the next card in that row has to be a Red 5 or higher. There are also restrictions about each column in the game. You can’t play a card into a column until the previous column is filled. This means that if the players had all the Green cards, they wouldn’t be able to play them without playing other cards. Finally, each column has to include a Reset card. This card does a few things when played. Primarily, it resets the number in the row, meaning lower cards can be played again if they weren’t played before. It also allows the player who plays it to discard up to two cards to the bottom of the deck and draw that many, helping get rid of cards that aren’t useful at the time. 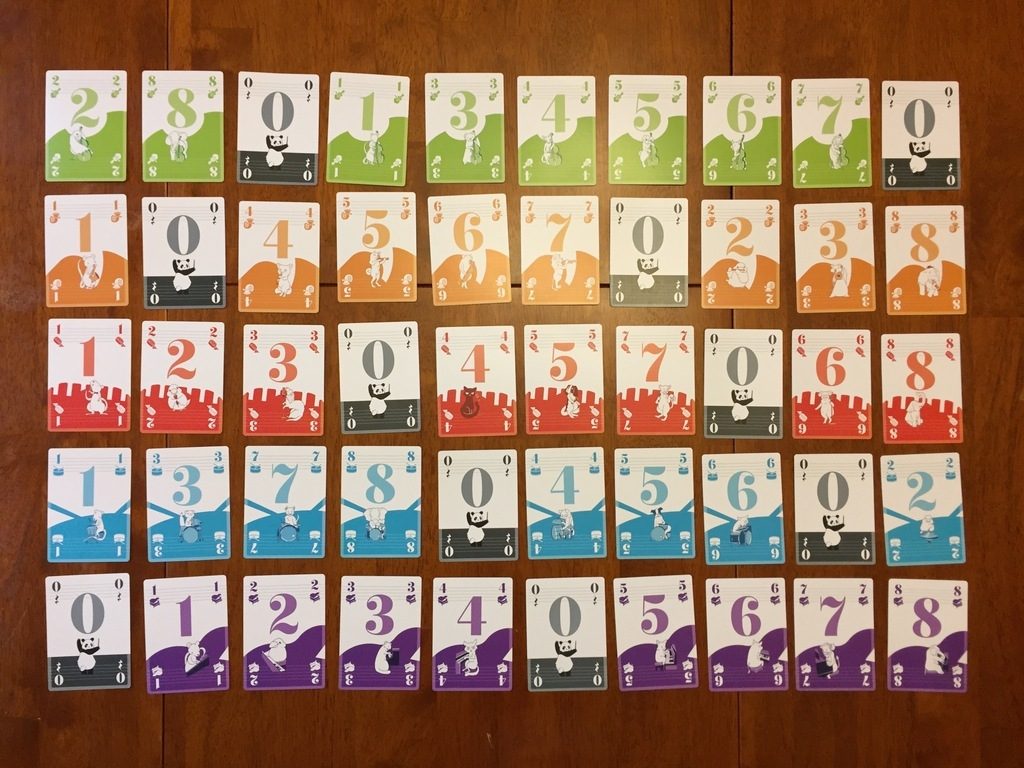 Players can talk about their hands, but only specify certain things. You can mention how many of a given color you have, but not the values of those cards. You can also suggest that you’d like to play a particular color or would rather not play a color, which can suggest values to the other players. Saying, “I’d love to play Blue!” is acceptable and helps keep the other players aware of your cards.

The game plays from 1-5 players, and it works well with every number I’ve tried so far. Solitaire is more of a puzzle and pushing your planning skills kind of game, and two through four players feels great. I haven’t tried it with five yet, but I don’t see an issue with the basis of the game.

I’ve played Okey Dokey 11 times since September and taught it a few other times without playing. It’s a great example of a quick cooperative game that is easy to learn and teach. The art is cute but not distracting and the icons on the cards make it very colorblind friendly.

After my plays, I’ve noticed two minor issues with the game. I do not have any musical abilities whatsoever, but given that the Reset cards have a musical Rest on them, I think they really could have been called Rest cards. It would help set the light music theme a little more in the game. The other issue is that while the first 75% of the game is group planning and thinking without too much room for quarterbacking, the last round or two are very calculated, so it becomes clear quickly if your group will win the game or not.

I have really enjoyed my plays of Okey Dokey and can easily see it getting to the table more often. It’s cute, easy to teach, fun to play, and a great example of a cooperative game that can be introduced to non-gamers. It’s also a great game to start with while waiting for others to show up or a game for the end of the night. If you’re looking for a game that your family might enjoy where you all work together, consider Okey Dokey as a great entry point.