Where is Clarksville? – A Ticket to Ride Series Review

While I play many games that haven’t made appearances at major stores, hobby level games are becoming more prevalent at stores like Target. One of my favorite games that’s getting more exposure is Ticket to Ride. 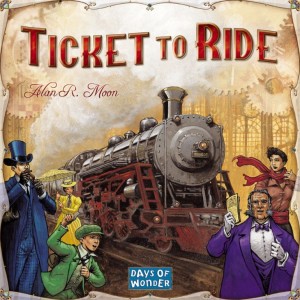 At its core, Ticket to Ride is a set collection game with some network building elements. For most of this review, I’ll be referring to the original Ticket to Ride based on the geography of North America. At the beginning of the game, each player is handed three Destination Ticket cards. These cards show two cities from the board and a point value. The player must keep at least two of these cards, but may keep all three. These Ticket cards are one of the main ways to gain points in the game. If a player can connect the two cities on one of their cards, they’ll get the respective points at the end of the game. If a player fails to connect two cities, however, they’ll lose that many points instead. The longer the distance between two cities, the more points that Ticket card is worth. Some Ticket cards work well with others. For example, Portland to Nashville is worth seventeen points. Seattle to New York is worth twenty-two points. A player could connect Portland to Seattle rather easily, then work their way to Nashville, then up to New York. This would count as completing both tickets, despite the sizable detour. 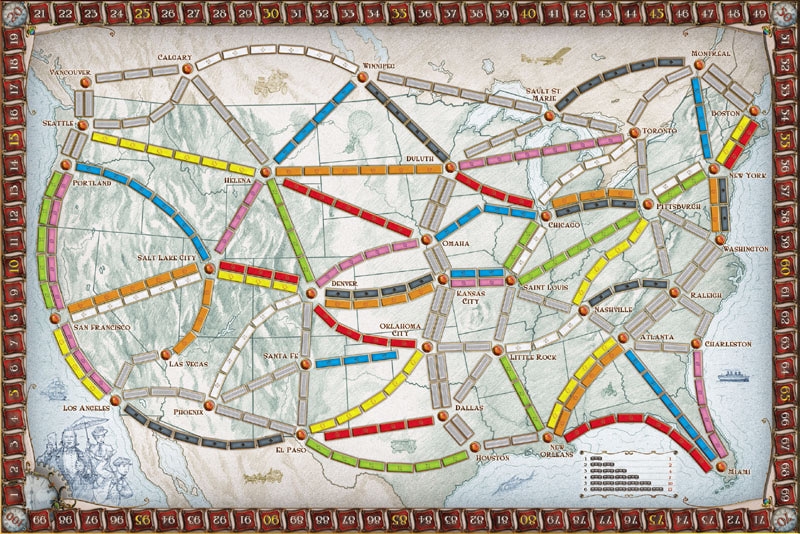 The way a player connects cities is through Train cards. These come in a variety of colors as well as wild cards. Players will start with four random Train cards and on their turns may pick up from a variety of face up cards on the table or take a chance and pull from the deck directly. On their turn, instead of drawing cards, a player may use a set of cards to build a connection from one city to another. Connections will vary in length from one to six train cars. When claiming a route, a player must use the full number of Train cards to completely fill the route, as well as use the correct color. Some connections are specific colors, such as Los Angeles to El Paso being six black trains long. Other paths will offer a chance for two players to claim the route, but only in four or five player games. To get from Pittsburgh to Chicago, three orange or black Train cards are needed. Once one of these connections is claimed in a four or five player game, the other players can use the other color to make the connection. In a two or three player game, the other option is locked out. Finally, there are some connections that can be done with any color, as long as it is all claimed with the same color. Going from Helena to Calgary requires four Train cards of any color, but they all must be the same.

With the limited connections to certain cities, players will likely not build the most efficient route to connect their cities. There is also a limited number of each color of Train card, so if other players are trying to collect large numbers of a color that you need, it may force you to build in a different way. The strategy in the game changes with each of the options for number of players. In particular, five player games can get quite cutthroat.

You can join us for the Ticket to Ride Learn to Play and Tournament at Great Lakes Game Emporium. From Noon to 6 PM, anyone can come by the store and learn how to play Ticket to Ride for free. We’ll also have two 8 player tournaments where players can take home special clear trains to add to their own copies of the game. There will be a $5 entry fee for each player for the tournament. First place in each tournament will take home a full set of clear trains and a special Ticket to Ride medallion. 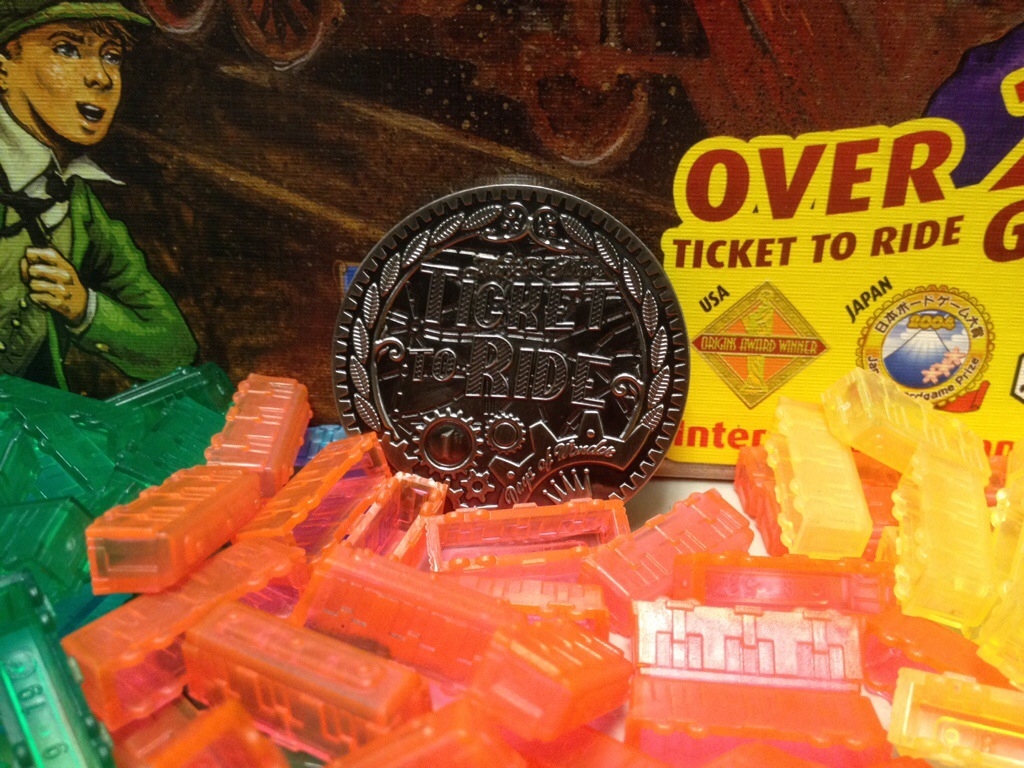 TableTop also covered the original game, as well as the first follow-up, Ticket to Ride: Europe. You can watch these episodes to get a feel for how the game plays. If you have questions about the game, leave a comment below or join us on February 9th for our event.