Back at Gen Con 2013, I got to play a game that was popular at the show called Gravwell: Escape from the 9th dimension. I’d heard some friends talk about the game positively, but I didn’t get a chance to pick the game up. Now that it’s out at stores, I thought I’d give it another look. 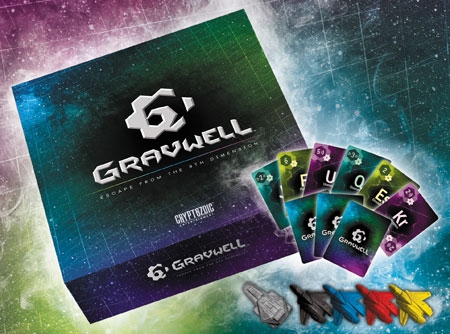 Gravwell: Escape from the 9th dimension

On the most basic level, Gravwell is a racing game. All players start at one end of a path and the winner is whoever makes it to the end first. The catch in this game is that while you control a space ship, your thrusters are broken. In fact, the only thing working on your ship is the tractor beam. With that tractor beam, you’re able to control how far you move, but you can’t guarantee in what direction. The deck consists of 26 movement cards labeled A to Z. In each round, players select cards from their hands and reveal them at the same time. The cards then activate in alphabetical order and players move based on the nearest ship’s location.

Strategy in this game comes from the order of activation. If I play a card that activates early, I can usually ensure that the way my ship will move is based on the current state of the board. However, playing a later card can result in moving much farther, but at the risk of not knowing for certain that the movement will be forward or backward.

There are also some special cards in the deck that add some more strategy to the game. There are two cards that pull all ships in closer to the player’s ship, helping to pull other players back and ruin their strategies. There are also four cards that push the player’s ship away from the nearest ship instead of pulling it towards the nearest ship. These cards can be very useful in moving around the board in ways the other players do not expect.

The game is played in rounds with players drafting cards from the table. The card are grouped with one face up and one face down per stack with players picking up a total of six cards per round. Knowing that another player has the A card can be useful, but with six opportunities to play that card in a round, nothing is certain. Grabbing the special cards can also be helpful, either to use yourself or simply to deny another player from getting them.

Gameplay is simple in Gravwell, but it shines due to the simplicity. This is a great filler game to play at the end of a gaming session or while waiting for others to finish. It also is enough fun to be brought out on its own for some slightly chaotic game time. Overall, Gravwell is a wonderful experience that I feel everyone should try at least once. You should be able to buy it or order it at your friendly local game store.