I picked up Machi Koro recently due to all of the times I’ve heard the game name brought up. I played a two player game of it the night I got it, as well as a three and four player game this past weekend. Is the talk hype or is it legitimate buzz? 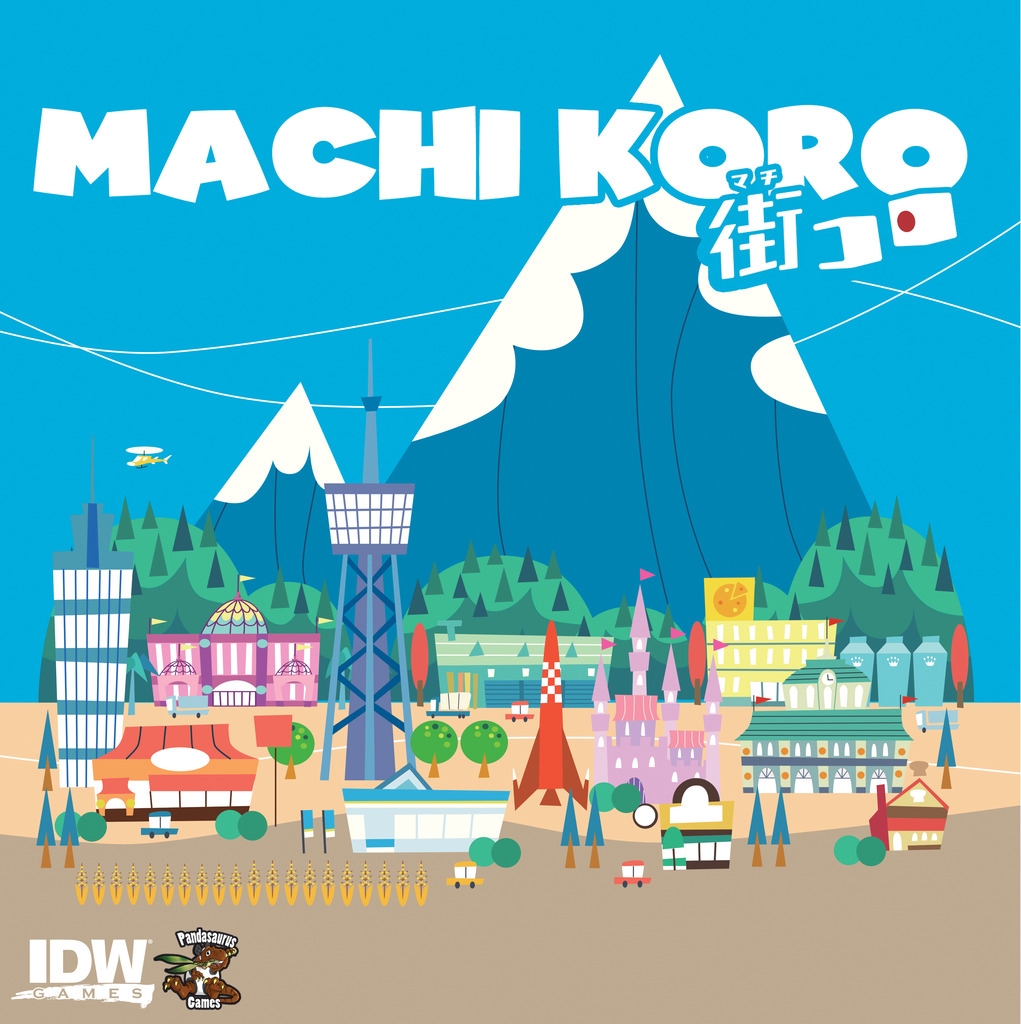 Machi Koro is a decently sized box but was described to me as, “Great as a filler since it teaches quickly and plays fast. Good opportunity to catch up due to the dice.” I appreciate filler games, and with a 30 minute game length listed on the box. I knew it would be a more substantial filler.

When I opened the box, I found 108 cards, two six sided dice, and a thin rulebook. For an MSRP of $30, this seemed a little high, but still acceptable. When I opened the cards, I found that many of them had been cut poorly, as you can see below.

I tweeted out to Pandasaurus who responded quickly with an email to help resolve the issue. Again, for the $30 price tag, I expected no issues for what came in the box. However, there is no randomness to the cards in the game, so it didn’t affect game play at all.

When we sat down to learn the two player game, I found that the game is very simple to learn. On each turn, the active player will roll a die and all players will see which of their establishment cards produce money. There are four kinds of cards in the game. Blue cards are Primary industries, Green cards represent Shops, Factories, and Markets, Red cards are Restaurants, and Purple cards are Major establishments. Each card will have a number or range of numbers at the top that indicate when they provide income. 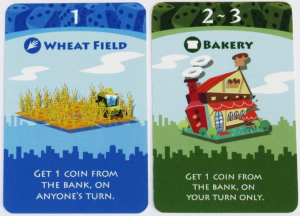 The Wheat Field gives the owner one coin when a 1 is rolled on anyone’s turn. The Bakery gives the owner a coin when a 2 or 3 is rolled, but only when it’s their turn. Other cards expand the results which benefit the owner, and multiples of cards can be owned to greatly increase the amount of income that is generated by a roll.

The second step in a player’s turn is to purchase a card with the money that they’ve earned. There are fifteen cards available to choose from in the base game, as well as four monument buildings that each player starts with face down. These monuments grant each player who builds them a bonus. The goal of the game is to be the first player to build all four monuments. Buying these cards early can be helpful, but they do not directly give the player a source of income, so a balance needs to be maintained between the monuments and establishment cards. The Train Station monument allows a player to roll one or two dice on their turn, opening up possibilities for the establishment cards that produce income on 7’s through 12’s. The Shopping Mall increases the income of several establishments. The Amusement Park allows a player to take another turn if they roll doubles, something which can greatly increase a player’s income. Finally, the Radio Tower allows a player to reroll their dice once each turn. This can be useful when a roll doesn’t benefit the player or if the roll benefits another player too much.

After a few games, I’ve found the gameplay to be light, but still has some decisions. It can be advantageous to be the first to build the Train Station, but it depends on how the dice are rolling. Gaining extra income with the Shopping Mall is useful, but it requires an investment into the types of establishments that it benefits. There are a few buildings that take coins directly from other players, which some players may find too confrontational, but if the players agree, it’s easy to simply leave those establishments in the box.

I do enjoy Machi Koro, despite the resources rarely coming to me when I need them. The art is simple and fits the theme and light gameplay. The tableau building is simple and with no hidden information in the game, it’s very easy to teach this to anyone. I see this working well as a filler or light game to end the night and suggest giving it a shot if you can.