Blinded by the Light – A Lanterns Preview

I got to check out a few new games at Gen Con 2014. One of my favorites was Lanterns, which is live on Kickstarter now. The game is gorgeous and has some really interesting mechanics that make it stand out to me.

Lanterns is a tile laying game for two to four players. Each turn involves the active player adding a tile to the game board. After the player adds their tile, each player will gain a lantern card that matches the side of the new tile that is pointing towards them. For example, in a four player game, Ken would collect a blue lantern card, Sam would get a black lantern card, Randy would receive a green lantern card, and Chris would earn a white lantern card. 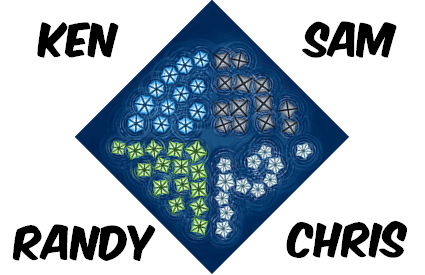 In this way, each player will gain a new lantern card on every turn. However, in the event that a deck of lantern cards is empty, a player will not receive a card. This can be important later in the game when some piles are empty and you don’t want to give an opponent another card.

On future turns, tiles are added to the board. There is no requirement to match the sides tile, so there are no restrictions on where tiles can be placed. However, if a player adds a tile that does match with the surrounding colors, they will receive a card of that color as well. Let’s look at the second tile that Sam is now adding to the board. 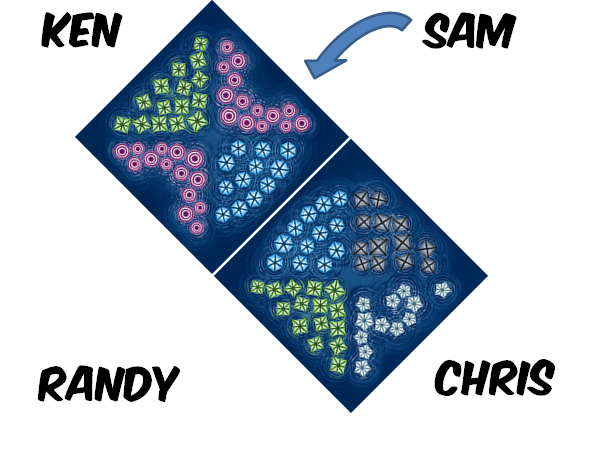 There are seven colors of lanterns in the game, each with their own unique shape, meaning there shouldn’t be any issues for colorblind players. The detailed shapes on the cards correspond to the overhead shapes on the tiles.

During the game you’ll collect a variety of colors of lantern cards and you can dedicate them in one of three ways to score points. First, any set of four matching cards is considered a set. Three sets of two different colors also counts as a set. Finally, one lantern of each color qualifies as one as well. At the beginning of each turn, the active player has the chance to turn in lanterns for the highest available tile for that category. As each tile is taken, it reveals the next which is usually worth fewer points. The number of available tiles changes with the number of players, which makes the game balanced with two to four players.

The final action that can be taken on a turn involves turning in favor tokens to exchange a lantern card for another from the supply. If when you play a tile you match a side with a platform tile, you get a favor token. 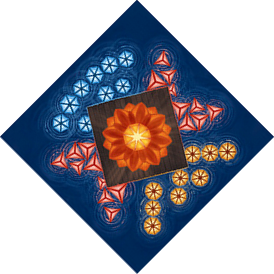 Two favor tokens allow you to trade in any lantern card for another from the supply. This can be helpful in two different ways. First, with three tiles in hand, you may not always have access to all colors. Using favors can be a great way to collect colors that are proving difficult for you. The other, more aggressive, option is to use the favor tokens and / or a tile placement to take the last of a color of lantern cards, preventing other player from gaining them.

The combination of tile laying and set collecting in this game pair wonderfully. The game is simple to teach and learn and the strategies are easily picked up. A finished session of the prototype edition is gorgeous to look at and the components that Foxtrot has planned for the full production game are even better. 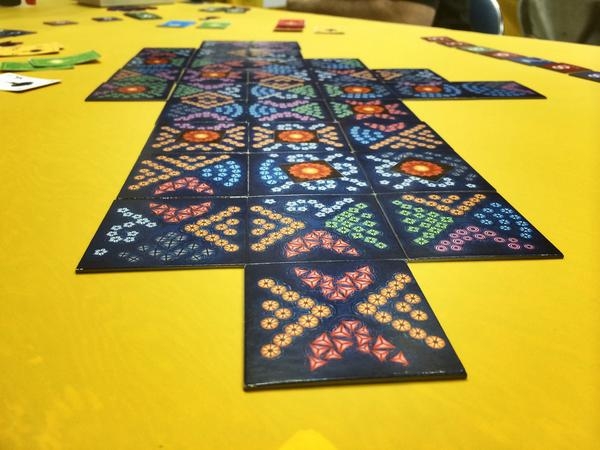 To put it simply, Lanterns is an amazing game. It’s simple, fun, and thematic. The gameplay length is perfect and overall, I can’t think of anyone who wouldn’t enjoy this game. If it seems interesting to you, check it out on Kickstarter or BoardeGameGeek and ask any questions or leave comments below.