I got to meet Ben Rosset when I went to the World Boardgaming Championships this year. I had seen some talk about his game, Mars Needs Mechanics, but I didn’t get a chance to sit down and learn the game. I made sure that at GenCon, I’d give his game a shot. If a guy has a giant rocket to help people find his game, I think it deserves a look. When there’s a really fun backstory for a game, I know it’s something I need to see. I really enjoyed the way the game worked and Ben’s enthusiasm helped show his absolute love for his game. 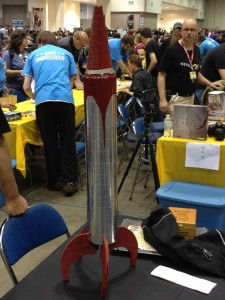 London, 1873 – The Royal Academy of Space Exploration has announced its intention to launch a mission to Mars by year’s end. In its quest to claim, fully explore, and map the great red planet, the Academy is holding recruitment competitions for various positions on the crew. A position central to the crew’s mission, the Astronautical Engineer must be resourceful and efficient in his construction of various mechanisms and ship maintenance.

In Mars Needs Mechanics, players represent engineers and tinkerers from all over the Empire who have come to compete for this prodigious opportunity. Starting the game with only 30 cogs (currency), players will utilize unique game mechanisms that emphasize timing to collect sets of components and build steampunk mechanisms aimed at earning even more cogs. At the end of the competition, the engineer with the most cogs will earn his place as Astronautical Engineer on the crew of the H.M.S. Victoria VII. 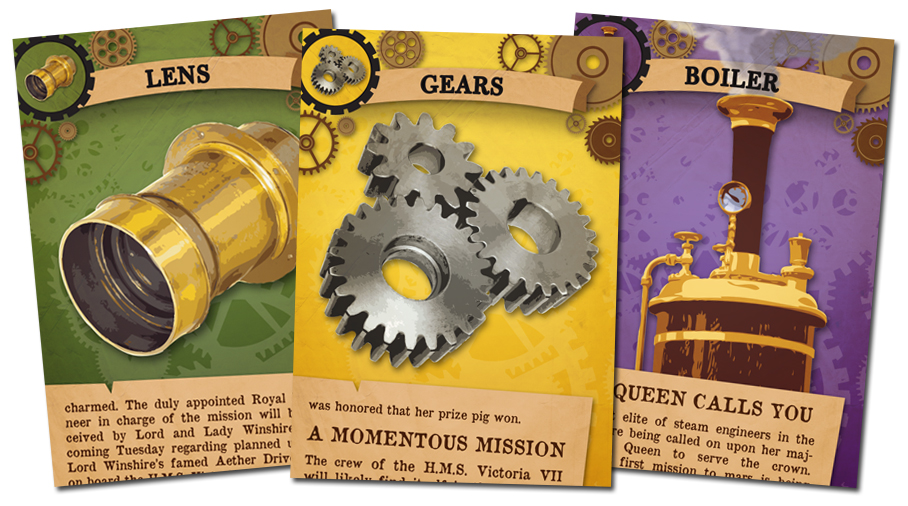 Each player starts with a hand of cards, three of them randomly from a deck, two being Scrap Metal. The deck consists of 56 cards, eight each of seven different components, such as wires or gears. Eight of the cards will be put out into the store where the players can purchase them. Each of the components starts at five cogs in price. and players start with 30 cogs to spend. The start player is given the choice of buying one card or passing. If a card is purchased, its token is moved to the front of the line on the board. The next player is given the same choice of purchasing a card or passing. The players will continue to do this until either the market is sold out or all players have passed in a row.

The tokens are now evaluated. The three goods on the tokens farthest back each drop in price by one, showing that they are not very in demand. The center token’s good doesn’t change in price, and the top three goods each increase in value by one. The players are now given the chance to sell their goods, but they must be sold in groups of three or more. Scrap Metal can be used to act as a card to allow a player to sell just two or even one good card, but the Scrap Metal cards are not worth any cogs. 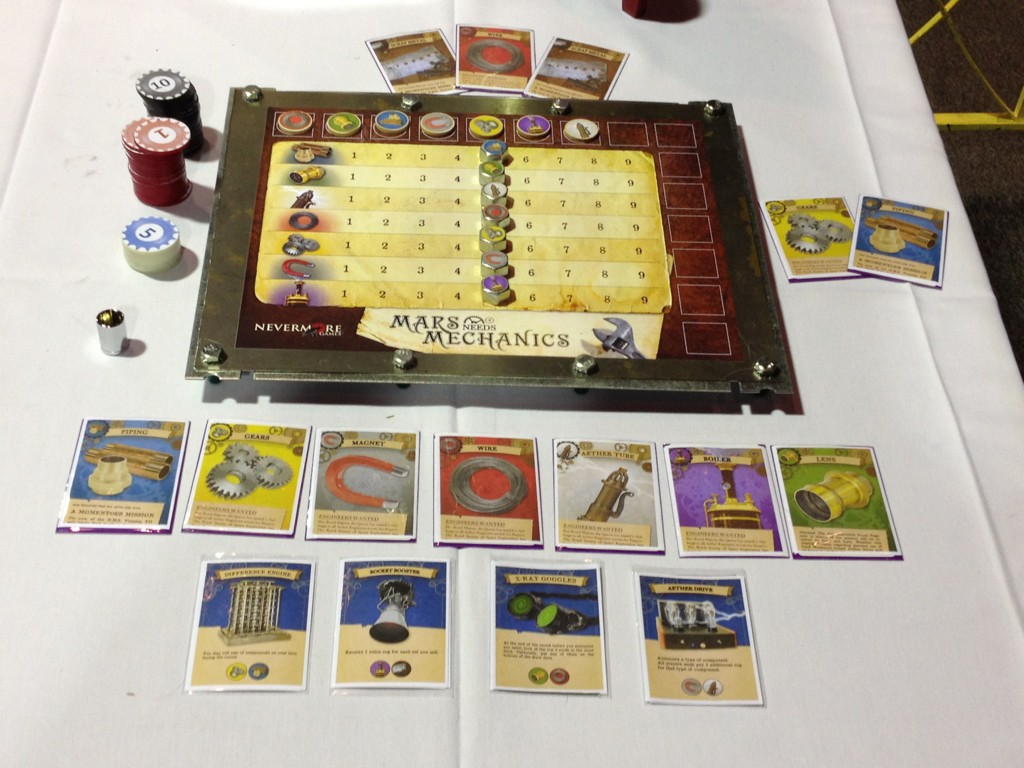 Mars Needs Mechanics Board and Cards

During the purchase phases, there are also different mechanisms each player can build with the goods cards they have in their hands. For example, the Rocket Booster gives you an extra cog whenever you sell cards. If you had three boilers that had a market value of six each, you would get a total of 19 cogs instead of 18. This is a small difference, but can add up over time. The game is played until the deck runs out of cards and the person with the most cogs at the end of the game wins.

Mars Needs Mechanics is a very simple, yet elegant game. The way the market values change is very simple but allows the players a way to manipulate the prices easily. The art in the game is beautiful and lends itself well to the story. There’s a very subtle way of timing your purchases and changing the market both to your favor and your opponents’ disapproval. WIthin one round, players can see how buying a card in a later round can change the way that the prices fluctuate. Passing one round just to buy something the next can be a simple decision that can greatly affect the prices later in the game. I love how simple the game is to learn, but how complex it can be to play when you take into account the other players’ strategies.

I only got to play this once at GenCon with three players, but the game will work with two to four. I can’t wait to try it with just two, which I’m expecting to be a very mathematical game, or with four where there will be more reliance on the other players and the way they are playing the game.

The game goes live on Kickstarter on August 31st. The game won’t be coming on that lovely metal frame, but I’ve been told there will be directions on how to make your own that will work with the printed board. I hope you’ll consider backing it, and I’ll be sure to have a link to the Kickstarter page once it’s up. In the meantime, look at the images in the Mars Needs Mechanics gallery, give the game a thumb, and get your friends to look into this game!

Edit: The game is live on Kickstarter! Go check it out!