The Emperor’s New Clothes – A Review

I received a letter today asking me to review The Emperor’s New Clothes, which is a game on Kickstarter being done by GameSalute. When I first heard about the game, I figured it would be some kind of game based on the story. Oh, but how wrong I was. 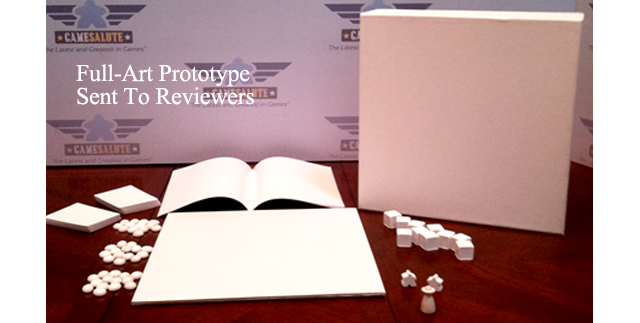 That’s not a mistake. It really is a completely blank box, white cubes, blank dice, etc. Literally nothing is being printed. If you back it, you’ll get blank cards, bits, and everything else.

And that’s the joke.

When I first saw the project images, I figured it was a game that would be revealed over time. When it didn’t change after several updates, I started to get upset. I follow a lot of games on Kickstarter, and I back the ones that I think are interesting and have potential. I didn’t see what the point of this project was. I noticed the last day to back the game was April 1st, so maybe it’s an April Fool’s Day joke. Then I got the letter. I won’t post the entire contents of the letter, but here are some excerpts:

I am now entrusting you with a closely guarded secret: there is no game. As you can see from the components, it’s a completely blank board with blank cards and blank dice; all of the printed pieces are white.

The real game is that you take this box of components and set them up to “play” the game with your friends out in public, or get two friends to play a prank on a third. In a sense, anyone who’s around, whether they’re actually sitting at the table with you or not, becomes a player of the game.

As you may know, I demo a lot of games, and I love doing it. I love teaching the rules, seeing the players start to grasp the game, and seeing the spark as they understand how the game flows. However, there’s a downside to this hobby that I love so much, and that’s elitism.

There are a lot of people in our hobby who think that people who aren’t already in the hobby don’t belong. If you were to take this and play it in public, I think there’s a real chance of alienating anyone who’s interested in what is being played, and the last thing that this hobby needs is less gamers.

I’m probably not going to make any friends with this review, but I’d rather have people know what’s really going on. If you want a box of blank components, please back this project. If you’re going to make a project that’s selling blank components to gamers so that they can make their own games, great. I think that would actually do really well on Kickstarter. But don’t build a Kickstarter project saying something is a game that isn’t.

I’m not saying I won’t back future GameSalute products. I enjoy a bunch of the games that GameSalute has helped get to market. I just don’t like the tasteless joke that is this Kickstarter campaign.

The creator has since updated the project stating that the project is a prank, but I feel the bad joke has already been made.

Edit: To be clear, I understand the potential joke about Kickstarter projects being duds. I’ve been bitten by a few projects like that. I just don’t think we need an in your face reminder of that.

Update: Please see my updated post here to get caught up on the story.