I have a love / hate relationship with dice. I enjoy games that have dice, but don’t tend to do well in those kinds of games. Wizkids has come out with the first game in their Dice Masters line, featuring Marvel characters. How does this game stack up? 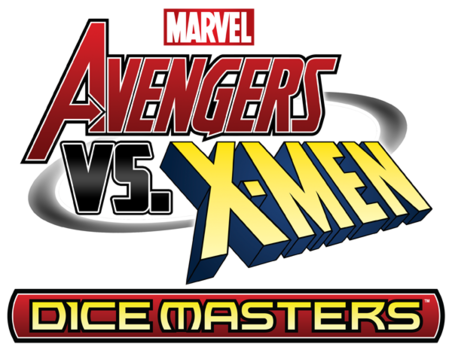 Marvel Dice Masters is the first game in the Wizkids Dice Masters line. In this game, you have a number of cards representing various Marvel characters and dice that correspond to those characters. The card quality is unfortunately poor. The art for various characters is the same for each of their cards, despite the backlog of comics that Marvel has access to.

Each player starts with a number of basic Sidekick dice that can produce energy, allowing players to add the character dice to their dice pool and eventually put them into the field, allowing them to attack or defend. If you’ve played Quarriors, there are many similarities. The attacking and defending is now optional, allowing players to build up strategies that require multiple dice over multiple turns. These dice can also vary in quality. Some have extra paint, making the icons and information hard to read. Others are lacking paint, or have none at all in spots, making it easy to miss information on the dice altogether.

The game has a lot of luck to it due to the dice, but there are ways of mitigating the luck. Each player normally gets a reroll on each turn, allowing them to try to get the dice to end up on the desired sides. Some characters give abilities in certain situations, giving the player better odds as well. Even if a player doesn’t get exactly what they want, they still have options on their turn, such as buying dice or fielding other characters. If a player has a particularly long run of luck, good or bad, it can decide the game for them without much input.

This is a Collectible Dice Game (CDG), meaning that after the $15 starter set, random boosters are purchased to obtain other dice and cards. There are 132 cards in the game, with only thirty-four coming in the starter set. Of the thirty-eight characters and items in the game, the starter set comes with only eight characters, with three cards for each. In order to get the other characters in the game, as well as the fourth card for that character, random booster packs need to be purchased. Normally this would be something I would avoid in a game, but as the boosters have an MSRP of $0.99 and come with two dice and two matching character cards, the game can be very affordable. Many stores do further discounts, making the boosters even easier to rationalize. As a completionist, I have an issue with this model. Even with the significantly cheap price, there are four cards that seem to come in one out of every ninety packs. This means to get them all, a player could spend $360 on six booster boxes. As someone who’s a completist, this is incredibly frustrating.

There are two main focuses for quality, the cards and the dice, and each comes from one of two purchases, the starter set or boosters. Cards in the starter set are fairly good with only a slight curve to the card when first opened. After a few days in a binder or under a heavy boardgame, the curve is removed quite well. As for the cards in the booster packs, they can come with curves, dents, dings, or be stuck to each other along the edges. Of course, since it’s $0.99 for two cards and two dice, if you’re expecting pristine cards to begin with, you will be disappointed. However, some dings and dents can be dealt with. Significant card damage is another thing. 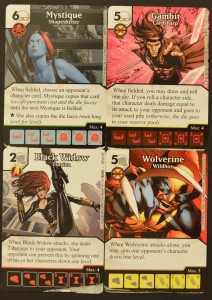 As a collector, this is at least frustrating. Even as simply a player, information can be missing from the cards. You can see on the Black Widow card above is the Super-rare version, making the annoyance that much greater.

The dice seem to be of the same quality, regardless of the source: Inconsistent at best. The coloration of the plastic and the fill can change from die to die. The filling of the numbers and icons on the dice can be spotty or heavy-handed, sometimes both on the same die. Some icons aren’t clear, while the occasional number isn’t filled in. There are even dice that aren’t quite cubes and have corners that were squished during the creation process. 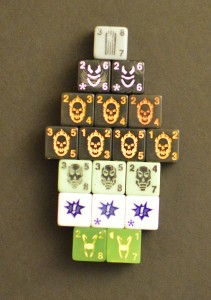 For each character, there are multiple cards. While Marvel has been around since 1939, Wizkids has decided to use the exact same image for every version of a character. Simply having different art on each card would help with differentiating cards during play and add to the collectibility of the game. The rarity stripe is purely in one color, and while fine for many players, anyone who has red-green colorblindness may find it hard to distinguish between them. The card numbers can help discern the rarity, but that is still an incredibly small font and isn’t consistent between the cards in the starter set and the booster cards.

There are some instances where clarity is not its best. Some cards remind you that abilities trigger only once, regardless of how many dice are in the field, while others do not. It’s never very clearly stated that Sidekicks are characters for game purposes. The rule book does include an example of game play and a suggested starting setup that works for two players, as well as other set up options.

So, there are issues with this game. The quality control seems to be lacking, the collectibility is a turn off, and the potential for the art just seems wasted.

I hate the issues with the game, but the game play itself is still simple fun. There are lots of versions of playing, potential for drafting, Organized Play is planned, and I’m going to be there for every minute of it. I can’t wait for the first tournament at my local game store. If you get a chance to try the game, I fully suggest you do. Look past the flaws and see the game underneath that is one of the best I’ve ever played.