I was given the opportunity to check out a game before it hits Kickstarter by Patrick and Michael from Crash Games. They sent a bunch of prototype copies out simply asking for reviews. I’ve gotten to play the game a handful of times, with a few different people, and want to go over my thoughts on the game. 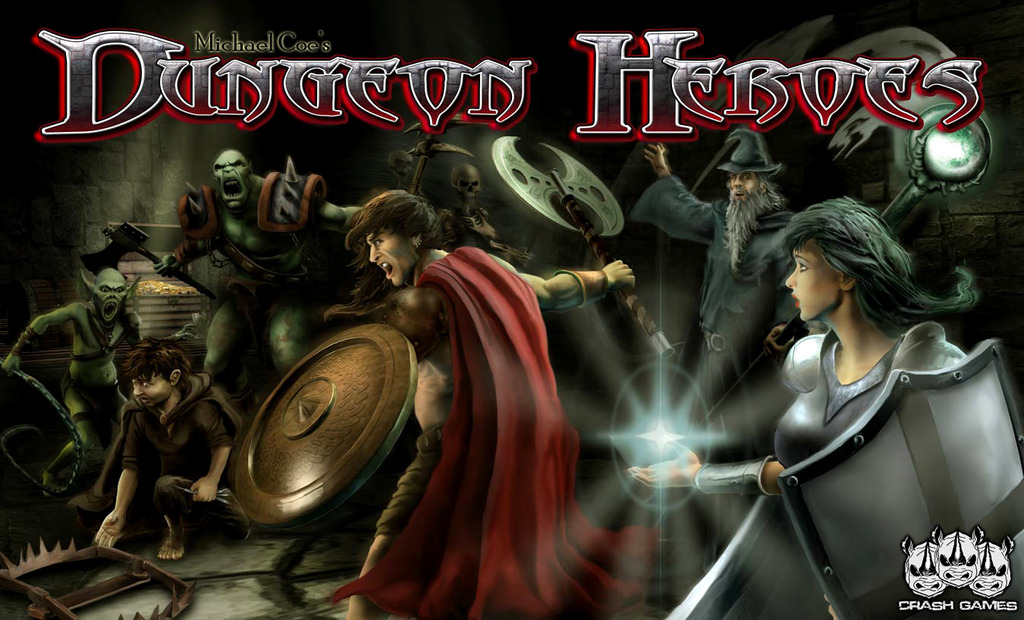 At its heart, Dungeon Heroes is a casual and quick two player dungeon crawl game with asymmetrical goals. The Heroes Player (Let’s say that’s my girlfriend, so “she” for the rest of this review) is trying to find three of four treasures in the dungeon using her Rogue, Warrior, Cleric, and Wizard. The Dungeon Lord’s time (Let’s say this is me, so “he” for the rest of this review) is split between setting up the dungeon for the first nine turns, the passive phase, and then trying to prevent the heroes from getting the treasure, the aggressive phase. It’s a fairly classic scenario, but the actual mechanics in the game are what make it unique.

On each player’s turn, they get four actions. For the Dungeon Lord, for the first nine turns, this means pulling four tiles and placing them face down on the board. These tiles consist of four kinds of monsters, four kinds of traps, three treasures, four different special items, two poisonous gas clouds, three portals, and four shifting floor tiles. The Dungeon Lord gets to choose which tiles go to which locations, but can’t look at them again once they have been placed on the board, so there’s a memory element to the game. Treasure should be kept away from the heroes and blocked by monsters and traps, but that might be too obvious against some players, so there is a bluffing element to the game as well. Once the Dungeon Lord has played all of his tiles, he uses his four actions to reveal tiles and move monsters in order to go after the heroes.

The Heroes Player get to move her characters around the dungeon from the start of the game, but with some restrictions. The Rogue and Wizard can move like Kings in chess, both orthogonally and diagonally, while the Warrior and Cleric can only move orthogonally one space at a time. Each character also has its own special ability. The Rogue can step on traps and disarm them without receiving damage. The Warrior can move into a space with a monster and kill it. The Cleric is able to heal herself, as well as anyone adjacent to her, by spending an action point. The Wizard is able to reveal dungeon tiles anywhere on the board by spending action points. I feel the Wizard’s ability is the most important one, as it allows the Heroes Player to flip over the individual tiles in the dungeon without taking any unnecessary risks. This reduces the guesswork and amount of chance in the game. With those four actions, only two can be spent on any one character for movement or their special abilities. For example, this means that the Wizard can only reveal two of the tiles in the Dungeon while the other two actions go to some combination of the Rogue, Warrior, and Cleric. 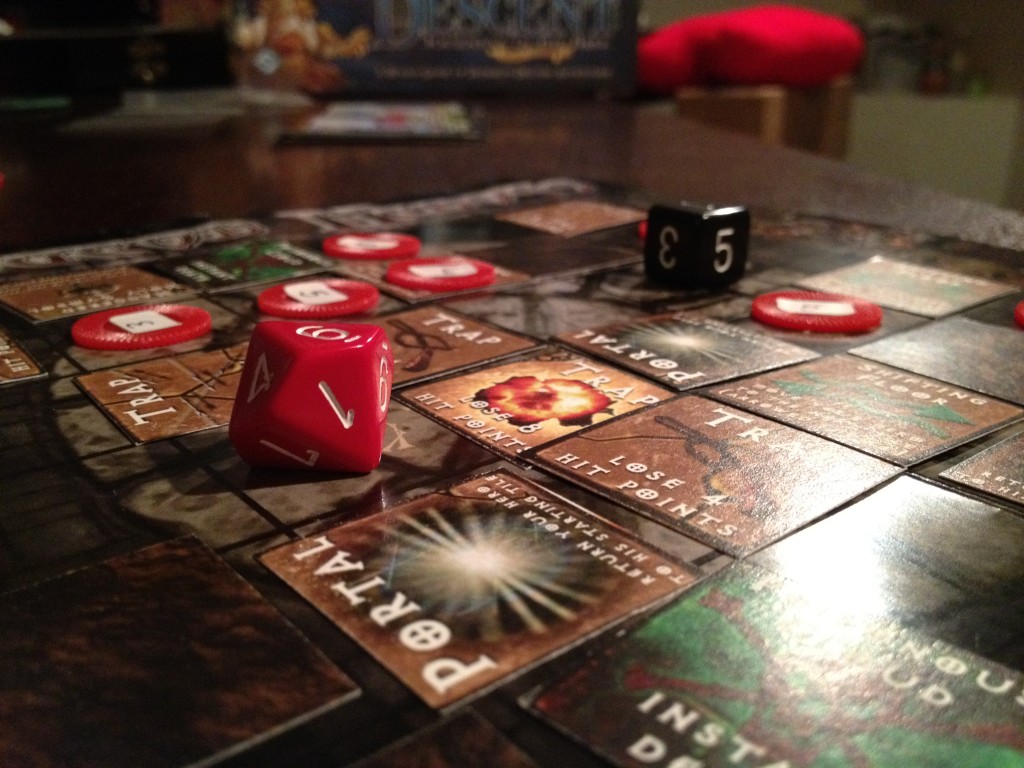 There are some interesting aspects to the game that aren’t apparent at first glance. The bluffing in the game surprised me, both in how much of it there is and how well it works. The bluffing is mitigated by the Wizard, but not completely removed. The traps and monsters are designed to block the adventurers, but since each of those kinds of tiles can be dismissed by the corresponding character, so there is a strategy in placing the tiles beyond creating a wall of monsters or traps.

In my experience, the game takes about 20 minutes, and is very quick to set up and play again. I knocked out three games with my friend at lunch in just over an hour last week, and we had a blast seeing how different strategies worked against each other. There is a metagame with where the Dungeon Lord will place items. If you’re familiar with the movie The Princess Bride, this is a situation of which Vizzini would be proud, as you clearly cannot step on the tile in front of you. The game play is deep enough to remain interesting and the semi-random set up of the board each game allows for a lot of replayability.

However, there are concerns with the game. Some players could easily become frustrated while playing as the Dungeon Lord, due to the random nature of drawing tiles. For example, getting a lot of traps at the beginning can be good to stop most characters, but not the Rogue. The same issue comes with getting multiple monsters, as they won’t cause damage in most games until after the dungeon has become aggressive, which can break the game for some people thematically. However, I think the first issue can be mitigated with another play of the game and the second is just how the game works.

Overall, I like the game. If you’re looking for a deep, long-term strategic dungeon crawling game, this likely won’t scratch that itch for you. If you’re after a lighter dungeon exploration game that has a bit of luck and bluffing with some light strategy that plays quickly, Dungeon Heroes could certainly be a great addition to your game collection. 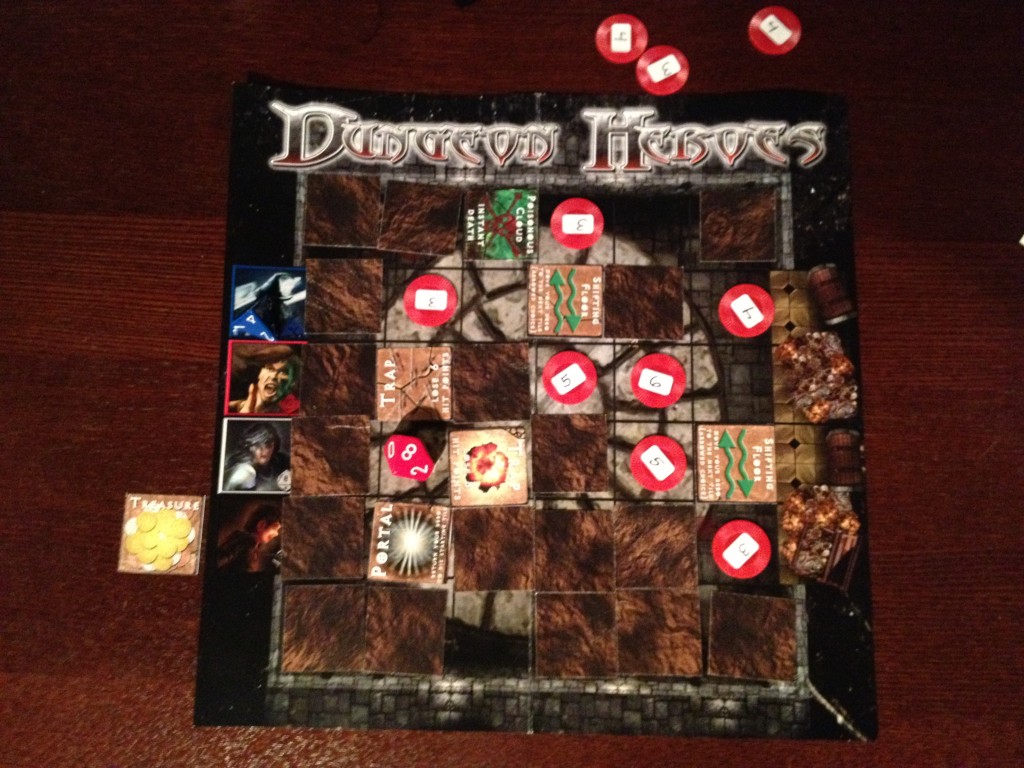 Please note that a prototype copy of the game was provided by Crash Games for this review. The Kickstarter project goes live on October 16th, 2012.