16 bits of fun in every box – Pixel Tactics Summary

Pixel Tactics is a series of games that contain only fifty-two cards in each box. How much strategy and skill can there be in a game where each player only gets a twenty-five card deck and a reference card?

When boiled down, Pixel Tactics feels a bit like a war game with cards. Each card represents a Leader or a Hero in your army and your goal is simply to destroy the opponent’s Leader. Even with such a simple idea, there are many decisions to be made when playing any game in this series. Brad has released two different sets so far, with a third due out soon. Each set is a set playable on its own, so while the different sets offer different characters, one set is enough to play the game.

Each of the twenty-five cards in a player’s deck represent a character. However, only one character can play multiple roles in the game. Each player has a three by three grid of cards. At the beginning of the game, each player will draw five cards and select one to be their Leader. That character is placed in the center of the grid and both players reveal their choices at the same time. For the rest of the game, this character will be the opponent’s main target and will aid the player by granting some ability. The rest of the cards in the hand are kept to be used as Heroes, but there are further decisions to make.

Depending on a Hero’s location, they will have one of three abilities. Vanguard Heroes fight in the front line, Flank Heroes work on either side of the Leader, and Rear Heroes fight behind the rest of the army. The game is played in rounds where the players take turn working through their three ranks, referred to as waves. During each turn, players can take two actions. These can include drawing cards, recruiting Heroes to the current wave, attacking with a Hero or Leader in the current wave, restructuring a Hero to another location in your unit, or clearing the corpse of a fallen Hero. A player can also discard a card from their hand to use the Order effect of that character.

To recap, a character can be a Vanguard, Flank, or Rear Hero, a Leader of your unit, or used to perform an Order. Each card can be used as one of five things during a game. This flurry of options can be overwhelming to a new player, so expect first games to go slowly while abilities are read and card interactions are realized. The first game for a friend and I took an hour and we still hadn’t completed the game. Some characters seem very overpowered at first, but as players get more familiarity with the various abilities, the true strategy comes to the surface while games start to move faster. Once two players are used to the game, they can take between twenty and thirty minutes. 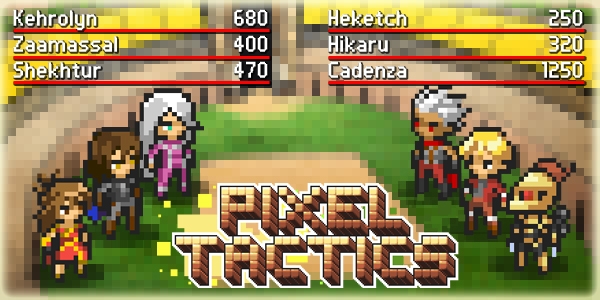 The art in the game is all reminiscent of 16 bit video games like Final Fantasy III or Chrono Trigger. The symbols are easy to understand and overall it gives the game a great feel.

The original Pixel Tactics came out as part of the Minigame library. It was printed with linen card stock which looks very nice, but can be difficult to read from across a table. The second printing of the base set and all other versions of the game come on stiff cardstock that is lightly glossy, making it very nice to read. The new card stock also seems to hold up to play better. Another difference between the printings of the original game is that some characters were edited and typos were removed. For example, The Fighter’s abilities are the same in each of the card below, but the formatting is better and the wording is better. Now it’s very clear that the increase is to Attack strength. Hikaru’s Leader ability was changed to increase the strength of his unit’s melee attacks by an extra one. Also, there is a small gray 1 next to the Leader sprite, helping separate the sets if they get mixed up for constructed play. 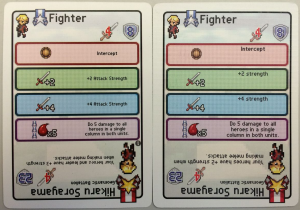 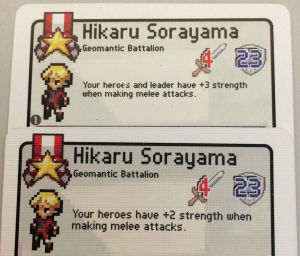 The later games in the series do tend to have more complex abilities, so if you want to try the game out but are concerned about the complexity, I recommend trying the original game first. If this game seems interesting, but you can’t seem to find a copy locally, you can also make your own set by purchasing the print and play editions. This can also be useful for players who want to try the game out for only $4 before paying the suggested retail price for the full version of $15.

I love Pixel Tactics for the small size and big game. There is a lot of potential for analysis paralysis, especially at first, but the game is fun and rewards strategy without punishing mistakes too badly. It’s hard to find a game that packs this much fun into a deck of cards. It’s also great to be able to carry all three versions of the game in a thicker deck box. That box and a block of small d6’s is all you need for six players at once. Pixel Tactics 3 is coming out soon, and so far it’s more of the same great game. Check out the Level 99 Games Store and considering picking up a copy.