Trains are a popular subject for many games. Ticket to Ride is a very popular game, and Station Master is a personal favorite. With so many train games on the market, it can be hard to stand out. Patrick Nickell of  Crash Games sent me a preview copy of Yardmaster, Steven Aramini’s first game so that I could see if this game can stand out in a crowd. 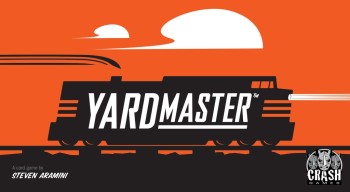 Yardmaster is a rather quick game with simple decisions. The goal is to get to a set number of points by adding train cars to your locomotive. However, in order to add a train car, it must match either the number or the color of the train car in front of it. If it doesn’t match, it doesn’t get added to the train and isn’t worth any points until it fits on later. Each of the four kinds of train cars are purchased with an appropriate type of cargo: Cattle, Oil, Timber, and Coal.

Each player will start with three cards in their hands and will take actions on their turns to draw more cards, purchase train cars, or switch Exchange tokens. When purchasing a train car, a player can use their current Exchange token to allow them to use two of one kind of good as one card of any other. There is also a token moving opposite to the direction of play that grants an extra action to the player who holds it. The game is incredibly simple to learn and teach. The flow of the game is fast as even if the player before you buys a train car you want, there are other actions to benefit you. The game plays from two to four players with a minor modification for the two player game. I find that the three player game is my favorite, but is still enjoyable with two of four. While I enjoy the game, there are two minor issues that I have with it. Primarily, it can be hard to tell how many cards a player has in their hand based on the current card design. However, the prototype design I was sent will not be the final art used in the game. The other issue is that there can be turns, particularly after purchasing a high cost train car, where the only real option is to draw cards. Even at its worst, the turns like this go quickly and are far from common. The game play keeps moving and while the game is light, players can’t turn on autopilot. The game is simple and fun and doesn’t try to oversell itself. The simplicity of the game and the ease of sharing it make it shine. This game is worthy of being at my table anytime. Check out the Kickstarter here and help show this new designer that he has a made a great game! 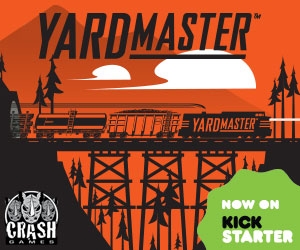