I really enjoy playing dice games, but I don’t ever tend to do particularly well. Mystic ScROLLs changes up the normal dice rolling, adding in real-time elements and expanding options. Is the game magical, or does it just seem a like a curse? 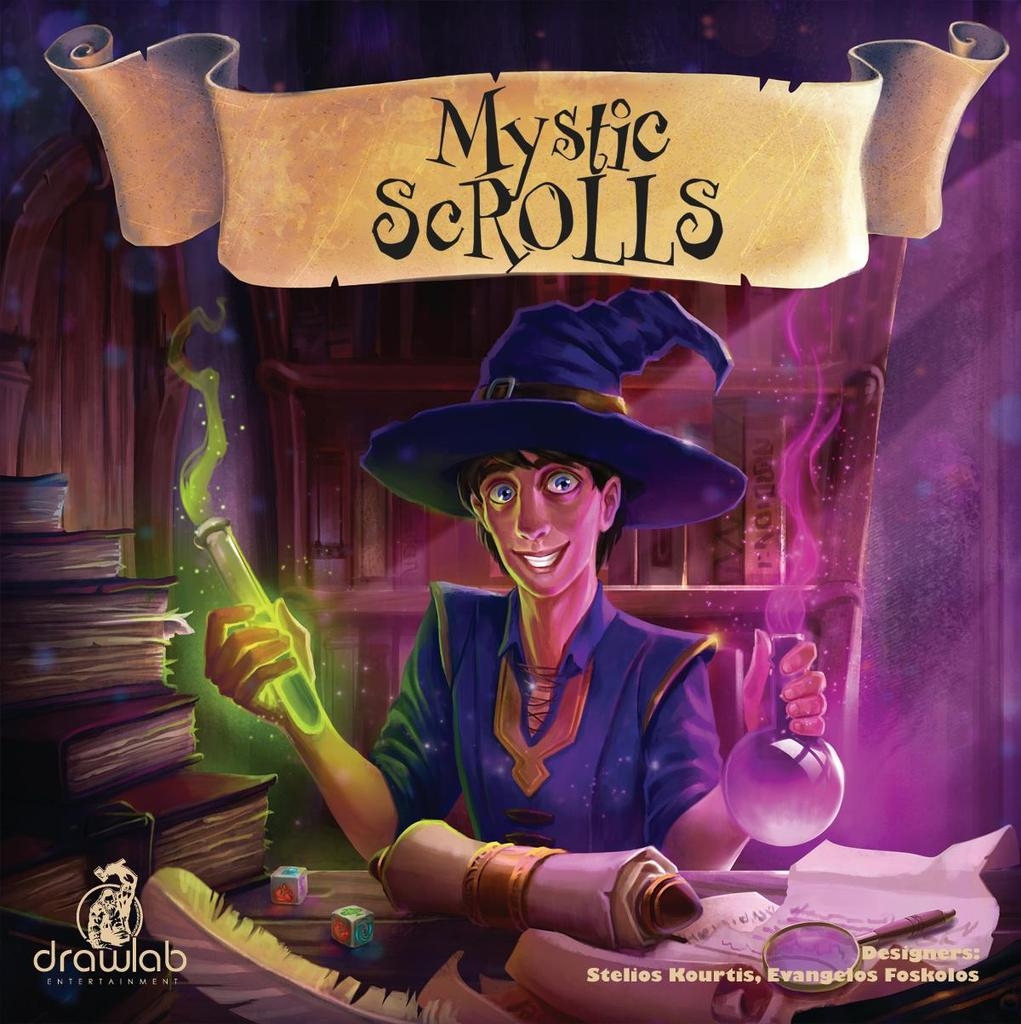 Players take on the roles of wizards who find an ancient library filled with magical scrolls. Unfortunately, the power contained in those scrolls makes casting your spells difficult. Sometimes this means you don’t get to cast many spells at all.

In the game, players start as one of four wizards, each with their own focus in magic. Each player starts the game with five spells on three cards at their disposal. A new spell card is flipped over for each round, representing one of the scrolls opening up. This spell can be learned by any of the magicians in the game if one of them rolls the five matching symbols on that card. Players can also use their dice results to cast any of the spells they started the game with or any spells that they learned in earlier rounds. When a player casts a spell they already know, they put those dice onto that spell and fill their hand to five dice to keep casting. If the pool of dice ever runs out or the new spell gets learned by one of the players, the round is over. All healing magic is used first, helping keep players in the game, followed by damage magic to hurt the player to your right.

The first round or two, players will likely be a bit overwhelmed. With four spells to choose from in front of you, a fifth spell to potentially learn, and trying to watch what the other players are doing, it gets to be a lot to worry about. However, as the spell requirements get more familiar, the game becomes easier and more fun to play. Each new spell gives the player another combination of symbols to consider, meaning players can easily have ten or more different spells to be cast. The two phases of spell casting and spell effects feels a little strange at first, but it really fits the game and works well.

At first, the game seems silly, and that’s not an unfair assessment. It’s real time dice rolling, which takes some of the strategy out of it, but choosing which dice to keep and whether to try to go after the new spell or casting an old one keeps players on task. The automatic targeting of the player on your right means no concerns about players teaming up on one opponent. The different symbols are easily differentiated by all players, meaning anyone with color blindness should have no issue playing this game.

Some of the spells feel aligned to certain characters in the game, meaning the other players should try to stop them from getting those spells. My favorite spell is Lucky Bones. In order to cast it, you need to spend 1 water, 1 fire, and 1 earth die. It allows the caster to roll seven extra dice after the round is over and cast spells. These dice don’t get rerolled, but it’s sometimes very useful to get free dice and extra spells after all other players are done with their casting. 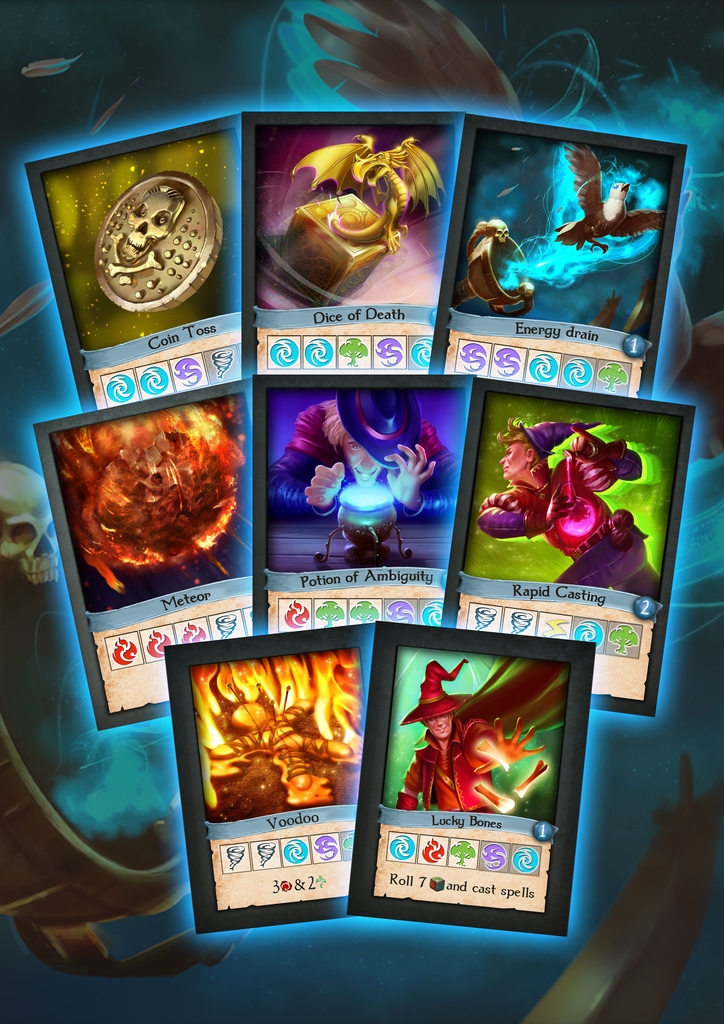 I love the art style in this game. The cards are large, making it easy to see what requirements a spell has, but the art on them is what catches the eye. Each card looks very different from all other spells and the characters feel unique just based on style.

The game does have player elimination, which I’m not a big fan of in most games, but the time between the first player being eliminated and the game being over in this game is usually quite short, meaning no one is sitting out of the game for long. With different characters and a variety of spells, the game won’t get old for some time and with the speedy nature of play, it’s easy to do a few games back to back.

I have really enjoyed my plays of Mystic ScROLLs and if you enjoy dice rolling or real-time games, it’s certainly one you should check out. It’s up on Kickstarter now and with 11 days to go, they’re at 78% of their goal. Please consider going and checking out their campaign!