Roll dice IN SPACE – Tiny Epic Galaxies and Beyond the Black

Tiny Epic Galaxies is a game where players roll dice and select actions to expand their faction’s influence in the galaxy faster than their opponents can. It’s a game I really enjoy for a number of reasons. The Beyond the Black expansion adds new options for players, including pilots and exploring unknown space. Let’s talk about the base game and the expansion. 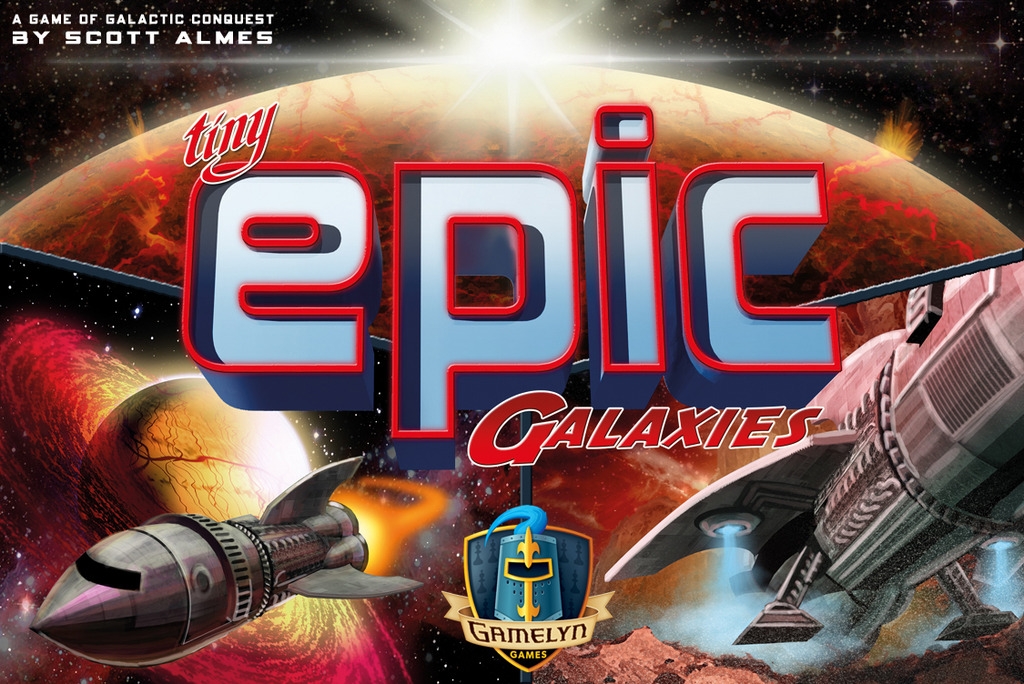 Tiny Epic Galaxies is a game about rolling dice and timing, where knowing when to push hard and when to hold off for a round can make a big difference. In the game, all players start with the same amount of resources and the same level of their empire. As the game progresses, players will start adding to the abilities their command, making them more unique as the game goes on. Players will use their energy and culture to upgrade their empires, gaining more dice, more ships and more points along the way. Players can also use energy to reroll dice, helping get exactly what they want, or culture to follow along with what an opponent does. As players get more ships and more dice, their turns get more complicated, and the order of action resolution becomes all the more crucial.

A turn is easy to understand, but becomes complex in execution. A player picks up all the dice they are allotted, which is four at the start of the game. The player gets one free reroll and may spend energy to get more rerolls. Once the player is happy with their dice or is out of energy to spend, they use their dice to gain actions. The dice have symbols on the faces corresponding to the different actions. 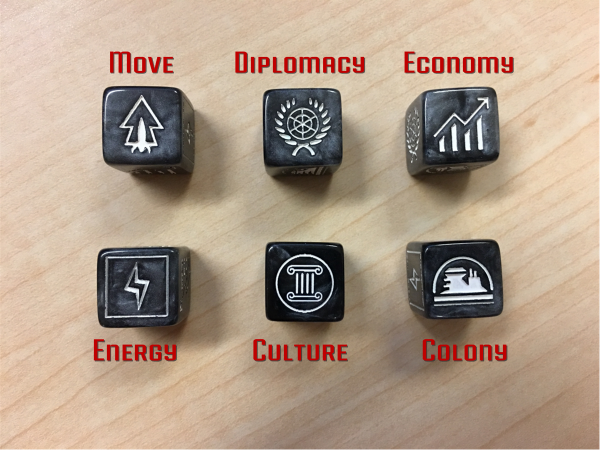 The Move action allows players to move one of their ships to a new location. This can be from the starting universe to land on a planet in the center row or to orbit it. Landing on a planet gives the player that planet’s ability as a one time effect, where orbiting a planet is how a player can claim a planet as their own and gain exclusive access to the ability and the points for the planet.

Colonizing is advanced through the Diplomacy and Economy faces, depending on which type of planet the player has landed on. Players use these icons to advance on the colonization track, but be careful as multiple players can try to colonize a planet and only the first one to complete the track gets the points and access to that planet.

Resources are gathered with the Energy and Culture faces. The player gains the matching resource based on how many planets they have ships on with that symbol. Each player’s starting galaxy acts as an energy source as well, meaning Energy faces are useful even at the beginning of the game before ships have moved.

Finally, the Colony face allows a player to use any of their colony actions. At the beginning of the game, the only action available is to upgrade the empire spending Energy or Culture. As players colonize new planets, the abilities of those planets become other actions that the colony action can take, giving the player more options from this one die face as the game goes on.

Players will also have secret missions which they are trying to carry out to gain more points at the end of the game. These help guide new players and give them a direction to venture in and help them not being overwhelmed by the number of options in the game.

So far, the game is relatively simple and is easy to learn and developing a strategy seems straightforward. However, the game at this point would have no real player interaction. Out of turn, a player can spend Culture to follow the die another player has committed to gain that die’s action. For example, if another player rolls a Move face, all other players can spend a Culture to also move, but this move can be to land on or orbit any planet, not just the planet that the active player selected. This opens up many options and utilizing these out-of-turn actions make the game much more strategic.

The game contained in the original Tiny Epic Galaxies is rich and balances dice rolling and long-term planning to make a wonderful and interesting game, but it’s not perfect. The number of options can overwhelm new players and the game is not forgiving, meaning experienced players win by large margins over those learning the game. The ability to follow any dice on any other player’s turn can make late-game turns crawl where a player is rolling seven dice and each die can be followed. The order of resolution becomes a key part of the game at this point, but trying to play the game perfectly can result in analysis paralysis. Sometimes the dice just don’t roll what you need and the game can get frustrating, especially if a player focuses too heavily on one strategy.

Even with these issues, I love this game. The dice rolling and action selection make the game interesting and fun. The large stack of planets help every game be unique and keep the strategy from being too formulaic. The secret missions also encourage veteran players to try new strategies, helping the game stay fresh even after repeated plays. 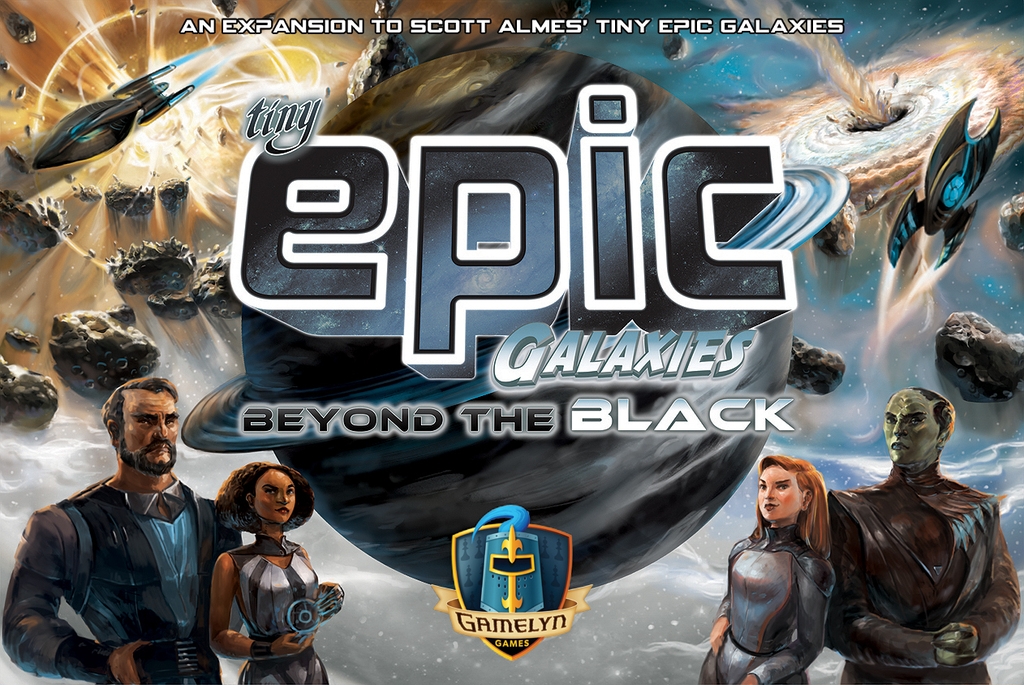 Currently on Kickstarter there is an expansion called Beyond the Black, and it adds more options to the game in the form of Pilots and Unexplored Space cards. Pilots fix one of the main issues with the game where sometimes dice just aren’t what you need. With a pair of matching icons, one of several pilots can be collected, making that ship have a permanent bonus for the rest of the game. 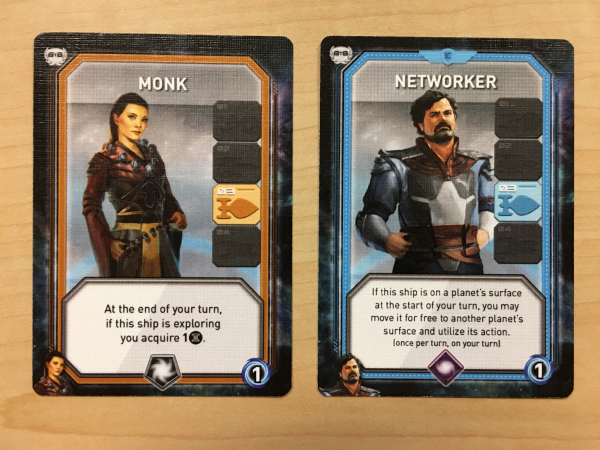 These abilities range from passive abilities, like the Monk who gives the player one Culture if it is exploring at the end of the turn, to game changers, such as the Networker. His ability activates at the beginning of a turn if he is on a planet’s surface, and he gets to move to another planet’s surface and activate its ability, giving the player a free move every turn that this ship is exploring. The Unexplored Space cards add an element of push-your-luck and set collection.

Instead of moving to a planet, a ship can now go exploring and find one of the Unexplored Space cards. These cards are good or bad, sometimes giving the player resources or points, but other times trapping a ship in a black hole that keeps one ship held until its track can be finished. Players can find a good card but opt to keep going in search of something better, but this can come back and bite the player. The Pilots and Unexplored Space cards also have icons on them which give points at the end of the game for having the most of each icon, giving the players more direction in the game.

With the expansion, the worst rolls are often still worth something and the planets on the table aren’t the only options for movement. While this gives the players more to consider on their turns, it reduces the frustration over a wasted roll. The time to play the game with the expansion is about the same as the original game, but the game feels more solid and everything in the expansion feels at home in the base game. The game is not what I would call short, but it’s an amazing play and Beyond the Black is a welcome addition. 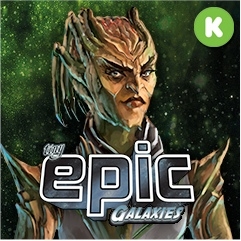 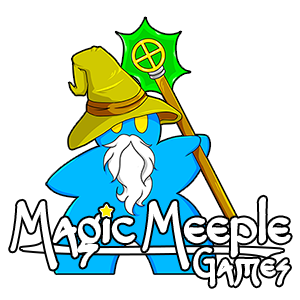