We like to party! – A Review of Belle of the Ball

While at Gen Con 2013, I got to check out a great party game called Belle of the Ball. Well, not a party game, but a game about parties. I’ve had a chance to play the Print and Play version a few times.

Belle of the Ball is a game of gathering goofily-named party-goers into groups and scoring points based on their similarities. For example, Fffffffff Flippinbird and Lord Capable Canklerack both have an interest in love, but disagree on their other two interests. 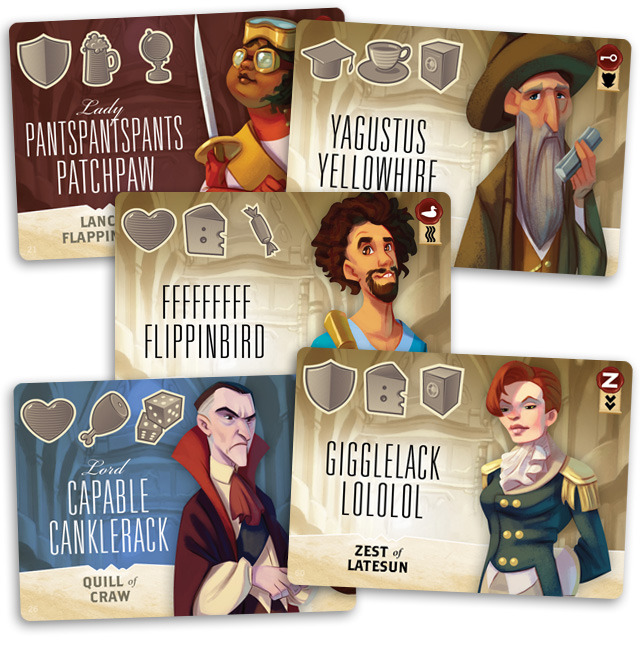 There are two kinds of cards in the game: Characters and Whims. Characters are like the cards above and are the main method of gaining points in the game. Whims are used to manipulate groups, score extra points, or mess up the plans of the other players.

When the game starts, each player receives three characters to start their groups with as well as three regrets (or four in a two player game). The character and Whim cards are laid out in two columns, with the deck at one end. On each turn, the active player will take a card from one of these columns. The front card can be taken from either column for free, or regrets can be spent to take a card farther back in either line. These regrets are then held by the skipped cards until selected, where the player gains those regret cards to use on later turns. Character cards are immediately added to a group when taken, while Whim cards must be played at the beginning of the turn, giving all players a chance to act before the Whim card is played. When a group fills up, usually with four cards, the group scores and is worth points based on the number of symbols shared between the characters present.

While the characters are the main focus of the game, the Whim cards have an important part as well. These cards come in three flavors: Mirth, Mischief, and Mayhem. Mirth cards are used to help you gain more points. For example, when The Belle Welcomes the Lords is played, as long as that card is active in a group that player gains a point whenever a Lord is invited. Mischief cards hinder opponents. When The Belle suspects Food Poisoning is played to an opponent’s group, it will score zero points for each cheese icon in it, regardless of how many times it is shared between the group members. Finally, the Mayhem cards cause some commotion, such as when The Belle presents a Lavish Feast. The player who plays that card gets two points for each ham present on each of their character cards.

The game play is learned easily and once the players understand the game it has a quick pace. First time gamers take around 45 minutes as they learn the strategies and understand the Whim cards, but later games take around 30 minutes. Scores are usually close, and while luck does play into the game, there is still a strategic aspect. The art in the game is very well done, and each of the 60 characters has a unique name, set of interests, and combination of title and county. There will be advanced rules that take advantage of the title and country, but the base game is a wonderful experience that is short, but still makes the players think. The game plays two to four players, and while there is more control with fewer players, there still aren’t any huge swings in the game, even with a full player count.

When I first got to try this game at Gen Con 2013, I was drawn in by the simple game play and recommendations from friends. Now that I have made a Print and Play copy (available through the Kickstarter page), and it’s the go-to game at lunch with friends. Quick enough to get a game in without feeling rushed, strategic enough that there is the occasional pause to figure out the best move. It’s a great balance of luck and strategy.

You can go back the Kickstarter, which ends on September 22nd, and check out the planned stretch goals. 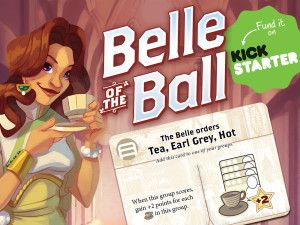