Chris Leder is a buddy of mine who made Roll For It!, one of my favorite casual gateway games that work with groups of people. He’s now working on getting Trainmaker published by Grey Gnome Games via Kickstarter. Let’s take a look at this next dice game from Chris. 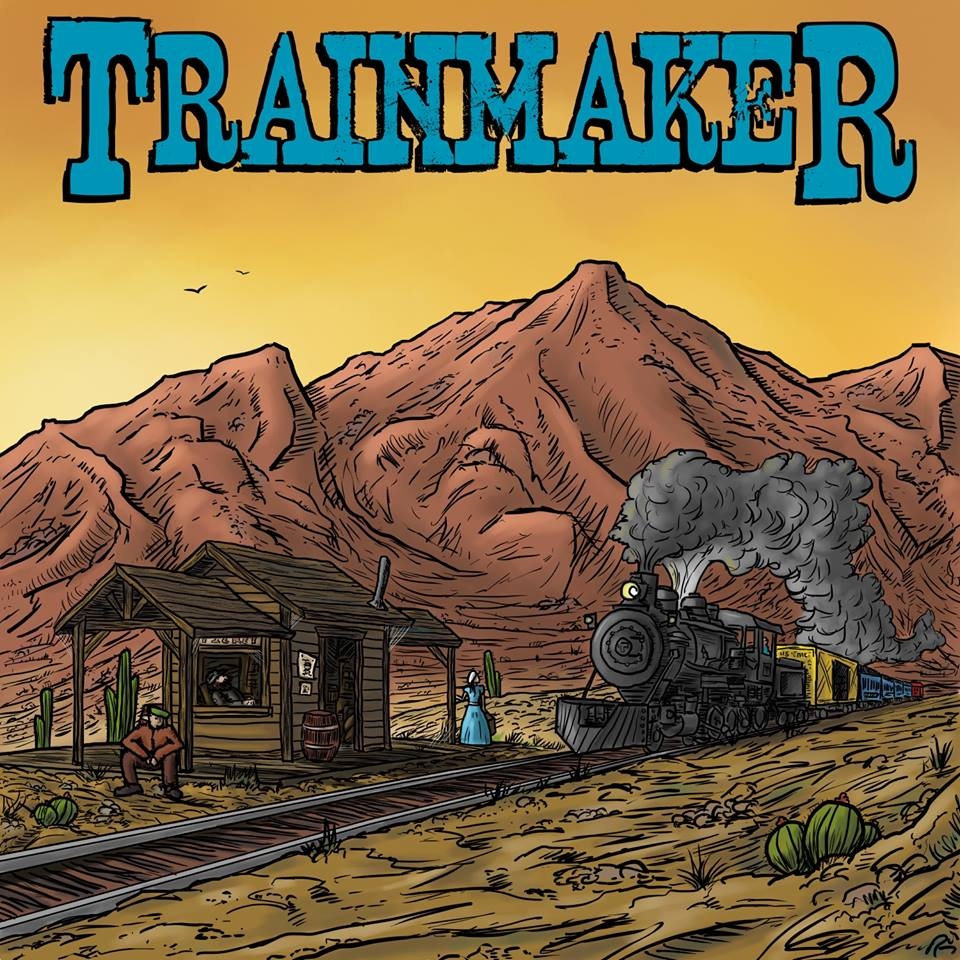 The premise of the game is fairly simple. Each player has a secret contract card that lists a set of types of stations or train cars that they need to collect to win. A player can also collect a set of each of the six kinds of station cards to win. Station cards look like this:

Stations represent cities that have various needs in the form of Boxcars, Flatcars, and Passenger Cars. There will be three cities face up on the table, available for completion. The needs range from one to four icons across the bottom of the card. On a player’s turn, the player will roll the seven dice and start building their train. A train must start with an Engine, of course, but a player can start with two as well. More on that later. 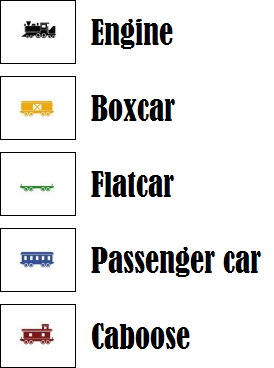 So, for example, lets say that the cities available are Chicago, Medford, and New Orleans:

To complete Chicago, I need two boxcars, a flat car, and a passenger car in my train in any order. Medford needs only a flatcar and a passenger car. New Orleans needs two passenger cars and a flat car. If you don’t happen to roll any engines on the seven dice, you have derailed, your turn is over just as quickly as it starts, but that should be rare, only about 5.8% of the time. Of course, if dice like you as much as they like me, you’ll be derailing turns and feeling like you’re left out of the game. This is one of the issues I have with the game, but it’s just a part of how it the game works. It still didn’t ruin the game for me, especially since I’ve won all of the games I’ve played of it!

For the first roll, let’s say we get the following:

We’ve got some decent options, but nothing that will allow us to collect a location. We have to start with an Engine and will add either the Boxcar or a Flat car to our train. We can also add both if we’d like to push for Chicago, as the order of the cars on the station cards doesn’t matter. Given that we’re halfway to being able to collect Medford, let’s add both to our train and roll the remaining dice.

We’ve lucked out and gotten the Boxcar and the Passenger car needed to claim Chicago. The rainbow question mark indicates that the card qualifies as any type of location, so it’s a great card to grab. We claim the card, pass the dice to the next player, and refill the tableau.

If in the first roll, a player gets two Engines, they’re allowed to put both of them into the front of their train. If they’re able to collect a station card with the rest of their turn, they get to use the dice again to take another turn to try to collect one of the remaining stations. If they derail with that second attempt, they still get to keep the first card claimed. If they’re lucky enough to get double engines again and get the second card, a player is allowed to go for the final card. Note that the tableau does not get refilled until a player’s turn is completed, meaning a player can gain at most three stations in one turn.

The game ends when a player has either completed their contract card or has one of each type of station. This usually takes around 20 to 25 minutes for a full game. This feels right for the game and makes it one easily replayed with new hidden contract cards.

Overall, I have a few very minor issues with the game. The fact that the train car icons on the card are not consistently listed can make it seem to a new player that the order of the train cars rolled matters. This would be easily remedied by simply listing Boxcars first, then Flat cars, then Passenger cars, or some other order.

The other main issue I have is that it can be difficult to see what kinds of cards other players have in front of them. Instead of having the art on the card be based on the number of symbols, it could be changed to represent the type of location. A post office for mail locations, lots of bustling people for a passenger location, and so on. Luckily, having talked with Chris Leder and Jason Glover about these issues and they’ve been very receptive to the feedback.

While the game has a few graphical issues, it’s still fun to play. The diminishing dice will make you feel as if they love or hate you. The various towns are fitting and the theme works for the game. It’s competitive enough to be fun but not so much that someone will be sleeping on the couch. I really enjoy playing Trainmaker and can’t wait to see how well the game does on Kickstarter!