One of the games I got to try at Origins was Tahiti, which is currently on Kickstarter. While I am backing it already, due to how the game looked and knowing the designer, I thought it would be a great opportunity to learn the game from the designer himself. Dave sat down with four of us and taught us the game, and I was blown away. 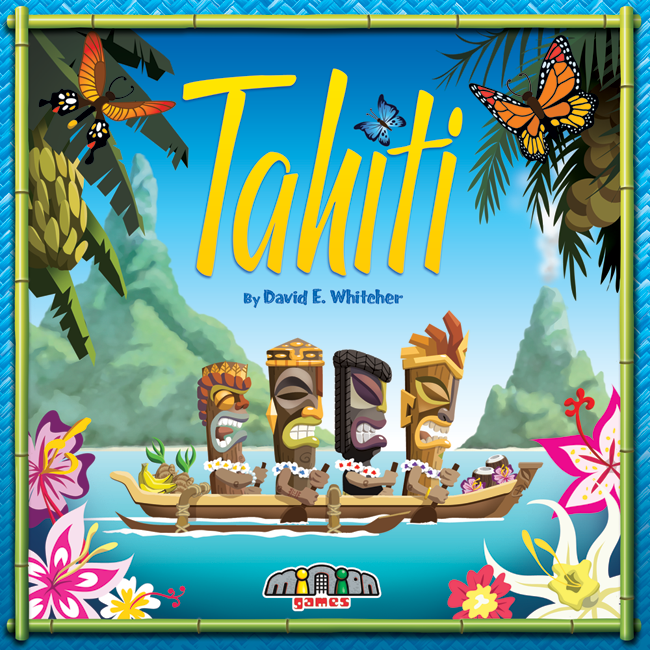 At its heart, the game is a goods delivery game. All players start out on the main island and receive a favorite crop tile. In the game, there are four crops: Coconut, Taro, Spice, and Bananas. Each player will get some pairing of two of these, representing the favorite kinds of food for their family.

There are two phases to the game: Expansion and Depletion. During the Expansion phase, each player adds an island to the map, adds resources to the map, and then takes their turn. Each turn consists of one to four actions. These can be moving from one tile to another, picking up goods from islands, unloading them at the home island, or fishing. Your canoe can hold either one of each kind of good or all one kind of good, which leads to some interesting strategy points. During the Depletion phase, when the tiles have run out, fewer goods get added to the board and the focus of the game changes from exploration and seeing how the map will expand to resource gathering and trying for more points.

The game has some really intelligent mechanics. First, during the Expansion phase, players can only move the goddess one space before adding a tile to the board. When a tile is added, it must be adjacent to the tile where the goddess is located. This makes the map stay relatively even instead of one giant long waterway. It also forces islands to be near other islands that likely have similar goods, making gathering resources easier for all players. Second, the players have full control over the pacing in the game. During the Depletion phase, if a player starts a turn and there is an island with no resources on it, it gets a token and will never produce those resources again. If players work together, they can slow the game down or speed the game up. It’s a really nice way of allowing the players more significant control over the tempo of the game. Third, the action point system Dave has designed is genius. At the start of the game, you get four action points per turn, and you will always have those action points unless you take up space in your canoe with other goods. You can hold two goods without any penalty, but if you take on one to three more goods, you lose the same number of actions per turn. It’s a very fine line between carrying everything you want and having enough actions to do everything that you need to do. Fourth and final, the travel from island to island is simple: Move from one hexagon to another. But for every reef you cross over, you draw a good out of the bag. If you have a matching good in your canoe, you lose it to the bag. With this risk element added, navigating back to the home island gets interesting, especially when you have a fair number of goods. A benefit of the way it works in the game, though, is that you can easily calculate the odds for how likely you are to lose or keep your goods.

In our game, there were some interesting groupings of islands, as well as some pseudo-pairings of players. I knew that another player wasn’t after either of the two resources my family liked best, so I would set up islands with the goods I wanted near him as I figured he wouldn’t be likely to take them. While this worked for a good portion of the game, the other players caught on and started going after those resources as well.

Overall, the game is fairly simple and has a nice mix of luck and strategy. I also really like the art style and the mechanics in the game, and I’m happy that I’m backing it on Kickstarter. If you donate even just $1, you get the print and play so you can check the game out yourself and consider purchasing the full game. It’s a lot of fun and one that I think will become a favorite of friends.