What’s the Frequency? – A Review of Incoming Transmission

Incoming Transmission is up on Kickstarter for another round of backing, trying to take last  year’s successfully funded game and make it bigger and better. The combination of hidden intention, light programmatic movement, and cooperative goals makes for a unique experience. Let’s see if it has the lasting power to reach out to the stars or is just some local broadcast. 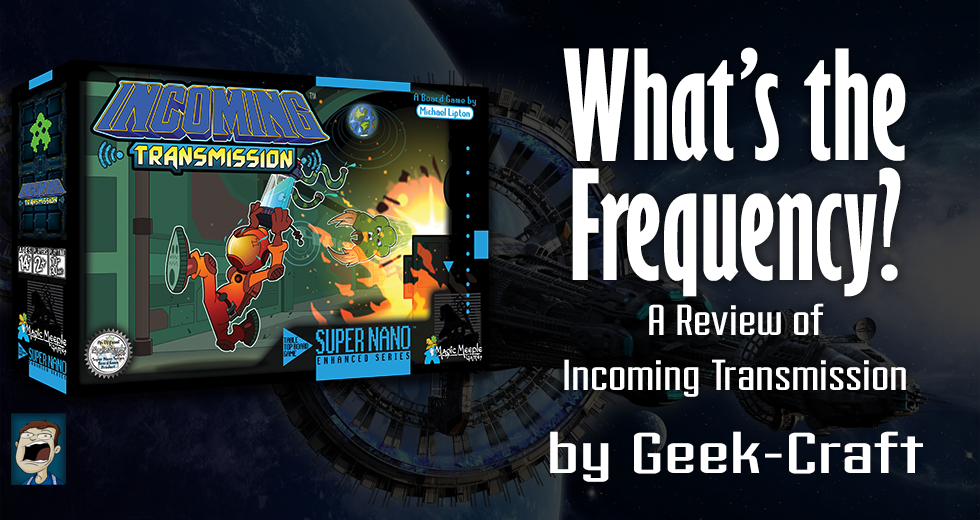 Magic Meeple Games has delayed production of Incoming Transmission and set up this project for the game, both to let more people back it and to enhance the rewards of the Kickstarter project from 2018. They were happy with how the project ended, but wanted to add some improvements and features that weren’t achieved during the previous Kickstarter. They reached out to backers to ask if they should do an expansion later, do another Kickstarter project, or just go with what was done in the first project. Over 90% of responders said to do another Kickstarter to make the game even better, so they’ve done just that. This isn’t a Kickstarter to make the game a reality, the first project achieved that. If this second project does not fund, the game will still be made without these upgrades.

Extending the game to allow the use of an app is fun, but let’s talk about what the base game offers before we get into other enhancements. The core idea of the game is easy to understand – There are two teams, with one person being Mission Control and the other 1-4 players helping control the Cadet on the station. The Mission Control player has three goals that only they can see, and they have to use cards to convey to the Cadet what objects on the station need to be moved where in order to fix the station and win the game. These cards are simple commands, as the communications array has been damaged. There are eight movement cards, two each of the cardinal directions. There are three action cards, one for repair, one for collect, and one for deploy.

The Mission Control player has to look at the goals and figure out where the Cadet needs to move and what they need to do in order to achieve those goals. For example, I’ll set up a small board. Let’s say that the Cadet needs to pick up the Android where they currently are, move two spaces East, one space South, and then deploy it to put it next to the Greenhouse. The Mission Control player would select the following cards: Collect, East, East, South, and Deploy. However, as the communication equipment is damaged, these five cards will get shuffled before they are handed to the Cadet team. Now they have to decide what Mission Control is trying to tell them. Should they Collect the Android where they are now? Or the X-Ray Scope that’s one space East and one space South? If they pick up the Android, should it be deployed next to the Greenhouse and the X-Ray Scope? Or next to the X-Ray Scope and the Transport Craft? Maybe the next turn will have them Repairing the Science Lab, but what should go next to it? 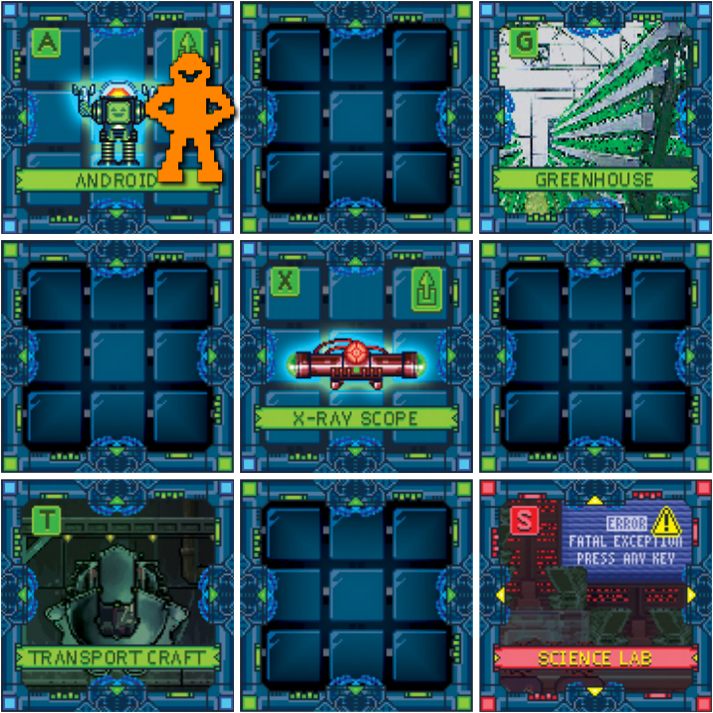 Really tough decisions are a part of playing the Cadet in this game, but it can also be stressful for Mission Control. You have to give five commands each turn, but you are limited on options – If you need them to go East four times, but you can only make them go East twice each round, what do you do with the other commands? You can’t waste time and you have to move quickly. Do you have them Repair something they don’t need to? Or will they get fixated on that idea? Now imagine a five by five board instead of this small three by three. Now you get the game.

Of course, the Transmission deck can be helpful… or not. It determines how many Clear Signals and Error Signals occur, and are how the game scales in difficulty from “This isn’t bad at all” to “Game over, man! Game over!” The Clear Signals that sometimes occur on cards will allow Mission Control to specify a single command. In the above example, if the first command was Clear, then it would be obvious that the Cadet needs to Collect the Android. However, there are also Error Signals. After Mission Control has picked the five commands to send, if there is an Error Signal, they must add a sixth card from the leftover cards to the stack before the Cadet gets to see them. If another South gets mixed in, the Cadet may think they need to go South twice and East only once, wasting time and movement.

If you are worried about quarterbacking in this game, given the cooperative nature, you could have a point. If one of the members on the Cadet team is louder than the others, it could turn into a two player game with some audience members. But the Mission Control player can simply hand the next set of cards to one of the quiet players, which helps get everyone to work together. It can be difficult playing the silent Mission Control, because no matter how obvious you think your plan is, the Cadet team will find a way to interpret your directions differently. The game feels like a mix of Hanabi, Mysterium, and Roborally to me. Mission Control has to convey things without saying them, but only through cards, and the Cadet player has to interpret the commands correctly and be able to react to confusing directions. Another aspect of this game that may not fit your group is that it can suffer a little bit from analysis paralysis, where there are too many options and a player can get stuck trying to figure out the best choices. There can also be a bit of downtime for the Cadet players while Mission Control figures out which cards need to be passed. But as the players get more comfortable with the game, this down time reduces significantly. It can be helpful to plan in generic ideas what the Cadet needs to do so the down time is minimized.

Definitely check this cooperative game out if the idea catches you. If you’d rather try it first, you could always check out the Print and Play or the digital versions of the game on Tabletop Simulator. The art is very reminiscent of a number of classic video games, but it’s not something where you have to know those properties to appreciate this game. There are seven different difficulty levels, and that’s not including the Meeploid version where an alien creature can mess with how the Cadet moves around. The planned app will also help with randomizing set up, and offers alternate modes for play. There are also more features planned, such as a light story mode and dynamic missions. I’ve found this game is a great way to introduce people to asymmetric and cooperative games that keeps things quick and easy to learn and play. Give the Kickstarter for Incoming Transmission a look, you have until February 26th to get on board!

Psst… There might be a hidden message in this transmission… If you find it, let me know.