How Machi Is Too Machi? – A Review of Machi Koro Legacy

Machi Koro is a very light and cute tableau building game that was released in 2012. Riding on the wave of other legacy games, Machi Koro Legacy was released in 2019. Is this more fun than the original, or is it just too machi? (Warning – this review contains some spoilers for the Legacy version of the game) 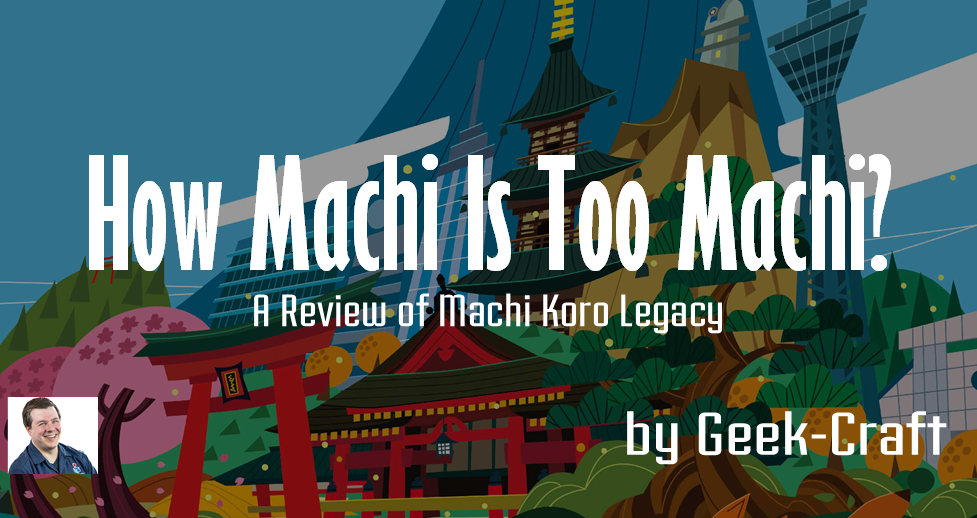 Machi Koro is a simple game at its core. Each turn, you roll one or two dice and everyone may activate appropriate establishments based on the total. For example, if I rolled a 3 and a 4, I would use any establishments that I have that activate on a 7. All of my opponents would use establishments that they have that activate on a 7 and that work when it isn’t their active turn. I would then use whatever coins I had to buy another establishment, or work on my landmark cards, which are how a player wins the game. There are a few changes between the original Machi Koro game and the Legacy version, but players who have any experience with the game will understand how the Legacy version works quickly. For fans of the original, the Forge — which lets you roll one or two dice — becomes an integrated rule fairly early on, which I think improves the game. For those who aren’t familiar with the game, you normally have to build the Forge location before you’re allowed to choose to roll two dice instead of one.

At the start of the 10 play campaign, players will start with what feels very much like the original game. One change is that there is now a community Landmark that a player has to build to win in addition to the three that they start with. Each player will also select a number of town square cards to start each game with, giving each player a little more direction for that play.

For the first few games, Machi Koro Legacy feels a lot like the original, and that isn’t a bad thing. The Legacy choices in the game are minor, but are interesting. When you win a game, you may get to choose which side of the new cards ends up being available for purchase during future games. The visitors were the big change to the game, and a welcome one for me. I liked how the characters influenced what was purchased, though the randomness of them was a little unruly at times. Using diamonds to allow players to reroll is also a nice mechanic, especially if you have an engine set up for a certain number or need to not roll a number that lets your opponents steal all of your hard-earned money. The little mountain on each player’s board gives that player diamonds at the beginning of each game, and spending your actions to mine will result in more diamonds in later games.

One issue we found is that once more gear establishments were introduced, it became very obvious what the winning strategy would be: Buy as many Furniture Factories as you could grab up and then as many gear tagged establishments as you could get. The Furniture Factory earns the player 3 coins for each gear establishment. This lead to gains of 30 or more in a number of games, as it activates on the roll of an 8 and even without the diamond rerolls, this wasn’t uncommon. I believe the record was 48 money earned due to having 2 Furniture Factories and 8 gear establishments. While other players would try to buy up things to stop this from happening, there is a Town Square card that allows you to take another turn on the roll of a 7, meaning you can buy multiple things before other players can get a chance. These common numbers plus easy access to rerolls meant whoever got this engine up and running the fastest would win.

The addition of the sea exploration was cute, but again if a player had enough money, it didn’t really matter anymore. This new action is based on the roll of a twelve sided die. If the roll is equal to or higher than the next spot, your boat moves up and you gain the benefit. If you don’t roll high enough, you reset. If you gained a benefit, you can’t gain it again. However, instead of rolling, you can also simply spend money equal to the value of the next spot and move automatically. For those with lots of cash, they could pay their way up the scale and get the benefits, resulting in the rich getting richer and the victories feeling kind of hollow. There were decisions, of course, but once the main strategy had been figured out, it was either play it or get destroyed.

The other issue I have with the game is that at the end of the campaign, there really isn’t a winner. In most other Legacy games, there is usually one winner for the campaign, or the players all win or lose together. In this, it just kind of ends and feels strange. Of course, you can go back and play with all of your buildings, try the other sides for the selected buildings, etc. Nothing is truly destroyed while playing this, and it allows for some fun after the campaign is finished.

The components vary in quality. The coins are plastic and feel great. The gems are the usual kind you’ll find in games and worked well. The plastic pieces for the visitors were cute and well done. However, the cards were frequently a little different in color and sometimes even slightly different in size. There’s not really any shuffling or randomness to the cards, so this didn’t impact us, but it’s one of those things that irks me (as longtime readers will know). The boxes for the legacy components felt a little oversized in many cases, but nothing felt overly wasteful. The extra stickers for the bamboo garden and waterfall were very cute and despite the disclaimer of “These will have no impact on game play”, my group fought to get them first. 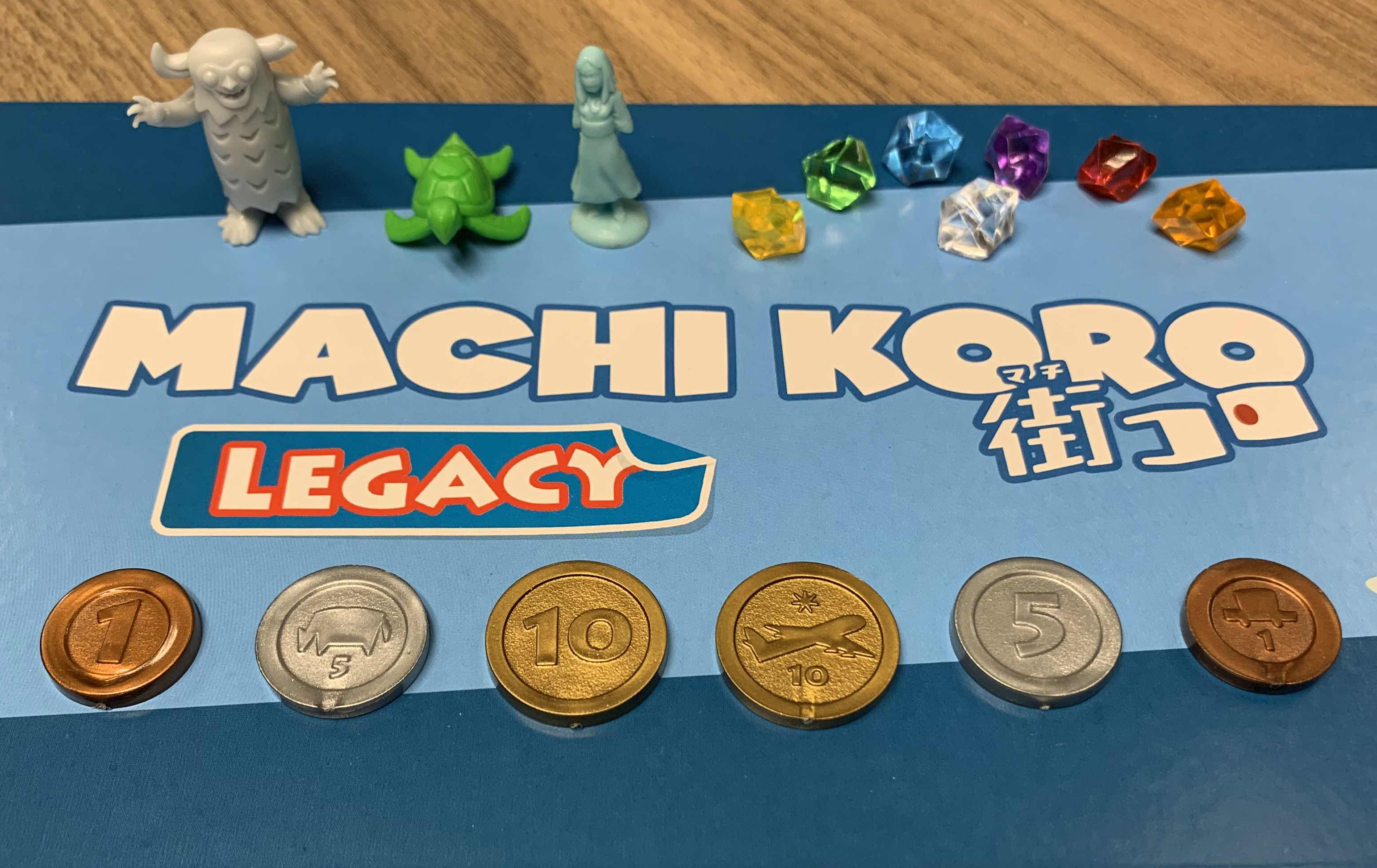 I think that Machi Koro Legacy is worth trying if you’re a big fan of the other games in the family. I think that while the Legacy options are light, they still offer some influence on the game and can give players a feeling of making decisions that matter. That being said, if you’re playing this with a serious gaming group that plays to win, you may want to consider house ruling the Furniture Factories. It’s just an engine that felt too powerful. The Legacy part of this game is in the story, which is cute, but isn’t really needed. It would be quite easy to reset the legacy and play again, simply noting which cards had been chosen as you go through the campaign. Tracking the mining of diamonds would be a little trickier, but still isn’t terribly difficult. That all being said, this isn’t really a campaign, as that would result in a single winner to me. This is a series of games with small connections between them. It’s not a big difference, I’ll admit, but it feels to me that they did 99% of the Legacy parts of the game and then just called it a day.

Author’s Note: I’ve done my best to review simply the game and not the individuals involved with the creation of it. I was sent a review copy of the game and played through all 10 plays of the campaign.