A Year Of Gaming – Week 5: Traveling in Time, Space, and Japan

January has come and gone, but there are always more games to be played and events to be run. This week involved games about traveling in time, space, and Japan. 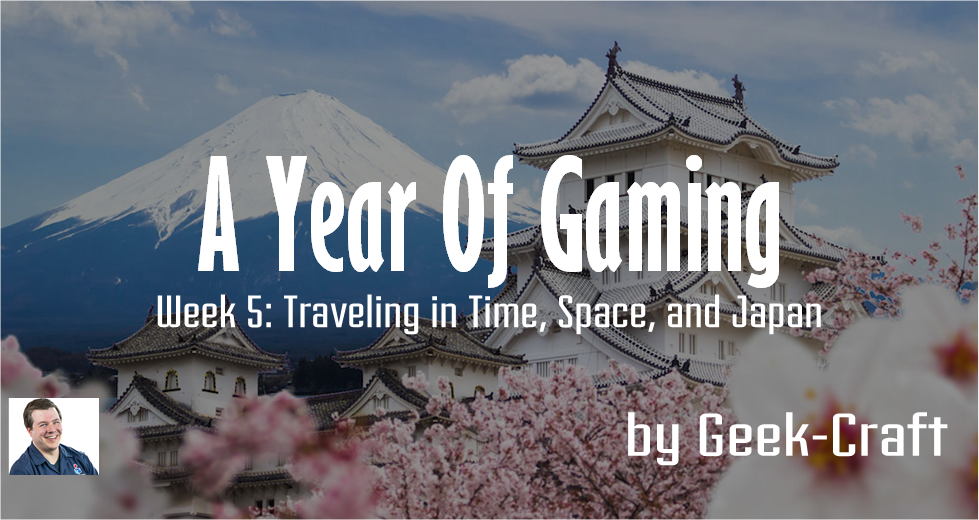 This article references the time between January 27th and February 2nd, 2020.

I got back into playing The Crew. 21 plays this week and I’m starting to experience new missions, which have some really fun twists. I’m concerned around some of the missions with two players as they require one player to assign all of the tasks to everyone else at the table, which means one person can end up with 6 tasks. I’m checking with the publisher to make sure this is the intent in the two player version, as there is an AI player, but it seems they’re simply another hand, not another player. Medium hit the table again, which I’m still enjoying. Taverns of Tiefenthal also hit the table again, which was more fun the second time. Knowing how to better work with the game helped everyone get a much higher score. It may be time to try one of the modules to change up the game play a bit.

Two new to me games also got played this week. Qwantum is from the makers of Qwixx and there are similarities, but this is not the same game. It’s about managing the total of each color on the dice and ramping up and then back down. It’s a clever and quick game, faster even than Qwixx. I think the dice hate me, but that’s always the case. Rick and Morty: The Morty Zone Dice Game (referred to as Morty Zone going forward) was something suggested I check out from a friend and fellow reviewer, Benny. I enjoy Rick and Morty, but I also know it’s not for everyone. I also know that games based on TV shows and movies don’t tend to be very good, but there are exceptions – see Battlestar Galactica or Harry Potter: Hogwarts Battle. Morty Zone feels a bit like Qwixx, but with some notable changes – each player has some personal scoring cards, a hidden scoring goal, and there is more ability to manipulate the dice with the Rick cards. I liked my first play and want to give it another shot soon.

Morty Zone arrived in the mail just before leaving for gaming last Monday, which is why it was easy to get it to the table. Before running demos at Critical Hit Games, I picked up a few games. My wife and I are big fans of Ticket to Ride, so Japan & Italy was an obvious purchase. I still need to finish the white TIME Stories cycle, but I picked up the first two boxes in the TIME Stories Revolution cycle – Experience and The Hadal Project. I’m hoping my old gaming group can start up TIME Stories Revolution, but we may have to change out some of the members of the group based on gaming availability.

Tiny Epic Tactics was a good time. I’m always amazed at how much game can be fit into a small box. The 3D terrain with the boxes works really well. I am also a big fan of the Final Fantasy Tactics feel, even if there aren’t jobs or other aspects of the video game. The cooperative and competitive options are nice, as are the tactical and battle focused gameplay options.

I’ll be teaching Paris: La Cité de la Lumiére on February 8th, and La Viña on February 15th. Both of these events will be at Critical Hit Games. As always, you can see all of my events on the Geek-Craft Facebook page.

I’ll also be getting the Shovel Knight Hope and Shadow boxes for Exceed soon. I think it would be fun to run a learn to play and tournament. If you’d be interested in participating, please let me know.