There’s been a lot of talk about Star Realms. I know it was designed by one of the co-creators of Ascension, which is a game I’m not a fan of, but with all the buzz, I thought I’d give it a try. No point in not trying a game out, right? 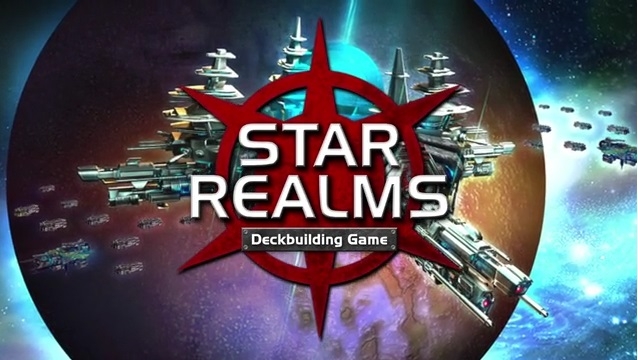 The game is very self-contained, taking up about as much space as a regularly sized deck box. Inside, you’ll find 128 cards and two rule sheets, enough for two players to play. The game expands by adding more sets to allow for many more players, two per additional set. A majority of the cards make up the main deck, where five cards are dealt out into a Trade Row. Each player starts with a ten card deck, composed of eight Scout cards and two Viper cards. Scouts provide Trade, which is used to purchase ships and bases from the Trade Row. Vipers produce Combat, which is used to attack opponents and their bases. Finally each player also starts with fifty Authority, represented by a variety of double-sided cards. This acts as the player’s life and the last player standing wins the game.

The game set up is very quick and reading through the instructions is simple for anyone who has played a deck-building game before. My first game went from opening the box for the first time to ending the game in eighteen minutes. Each player’s starting deck is separated and shuffled, Authority cards are set up, there is a pile of Explorer ships set off to the side, and then the main deck is shuffled and five cards are flipped over. With some dividers in the deck box, this is incredibly fast and the game can be set up in a minute or two. While this does have one stack of cards for all players to share, there is still strategy in choosing which cards to purchase. Simply buying the most expensive card is a valid strategy, but building a deck that focuses on a certain goal can usually beat a player who just goes for expensive cards.

The game play itself is also simple. There are two kinds of cards to purchase from the Trade Row: Ships and Bases. The ships generally act like the Vipers and Scouts in the starting deck, where the player simply plays the card and gains the benefit. However, the cards from the main deck have one of four factions. These are the Blob, Trade Federation, Star Empire, and Machine Cult. Each faction has a variety of ships in the main deck and a player can purchase cards from any or all factions. When played, most cards that belong to a Faction get a bonus if another ship of the same Faction is played. For example, let’s look at the Battle Mech from the Machine Cult Faction and the different pieces of information on the card. 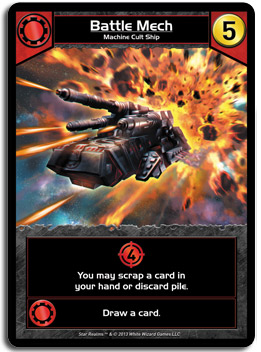 First off, the red gear indicates that this is a Machine Cult card. The vertical layout means that it is a ship (more on this later). The purchase cost of five is in the top right corner. The main ability of playing the card is in the main box under the art. Playing the Battle Mech lets you gain four Combat to use against your opponent and allows you to remove a card from your hand or discard pile from the game. Removing the starting cards from your deck makes it easier to get the more improved cards that you’ve purchased. Finally, the bottom Ally action next to the Machine Cult Faction icon is only available if you play another Machine Cult card on the same turn.

The other twist to this game comes with the Bases. Let’s take a look at one of those: 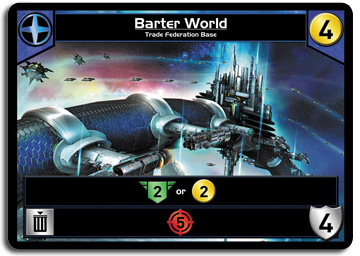 Barter World Base from the Trade Federation Faction

Bases look similar to Ships, but are laid out horizontally. They remain out from turn to turn, unlike Ships that only last one turn. They provide reliable sources of Authority, Trade, or Combat. For example, the Barter World offers either two Authority or two Trade each turn. If the player controlling it wants to add five Combat, they can remove it from the game. This can be a costly move, but if done at the right time, can have a large effect on the game. They also allow the Ally abilities for the appropriate Faction. Opponents can attack your Bases instead of going directly after you. Each Base has a Defense score in the bottom right corner of the card.

If a Base is an Outpost by having the keyword above the Defense, then it must be destroyed before the player can be targeted. If an opponent doesn’t have enough Combat to destroy an Outpost, the player will take no damage and the Outpost Base will reset back to full Defense at the end of the turn. These Outposts can be crucial to holding off your opponents and when a player gets multiple Outposts out, it can be very hard to defeat them.

Players continue playing combos, purchasing cards, and attacking until only one player remains in the game. In my experience, this takes around fifteen to thirty minutes depending on card interactions.

The gameplay is simple, the strategy is fairly straightforward, and I enjoy playing this game frequently. Seeing how quickly a player can react to their opponent and buying cheaper cards that will help set off Ally abilities help keep the game fresh and prevent a player from going into autopilot mode where they just buy the most expensive card. The art is very well done, the card lay out works well, and overall, it’s an amazing game that fits into a very small box. With the addition of some promo cards (available on BoardGameGeek), solitaire or cooperative versions of the game are available. I still haven’t beaten the Nemesis Beast boss card from the second promo set. There is also Organized Play planned for the game, which I’m excited for as it can help more players get into the game and add more promotional cards that while fun, seem far from necessary to enjoy the game. A digital version is also coming, which I’m very interested in trying out, especially for solo play. The game is inexpensive, simple, strategic, and fun. This combination has helped it earn its place in my Gaming on the Go bag. If you enjoy deck-building games or fast games that work great with two players, you should give Star Realms a try.