Tiny Epic Kingdoms is the first in a series of games from publisher Gamelyn Games and designer Scott Almes. This game is about conquering and controlling the land, but things aren’t always easy to plan. 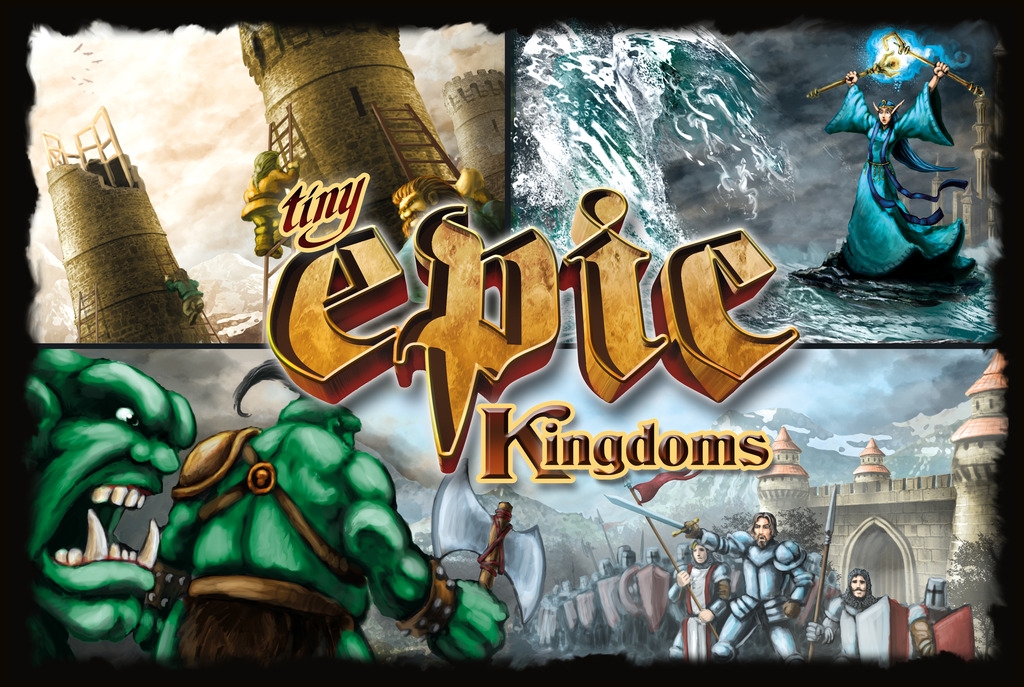 Tiny Epic Kingdoms is listed as a 4X game for two to five players. In a traditional 4X game, players Expand, Explore, Exploit, and Exterminate. Each player takes control of one race for the game and tries to out play their opponents. Different races benefit for different strategies, but the end goal is the same: To out score your opponents.

The game comes in a small box, but there are many contents. There are player boards, double sided terrain cards, player pieces (including mini meeples, resource trackers, and progress trackers), a rulebook, and a comically large castle tower. The below image covers the terrain cards, the tower and action boards, and many of the wooden pieces. 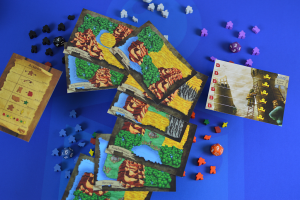 The rules are fairly simple to learn, but there may be some complications when two or more of the 13 races in the game interact. However, most things are clear and if there are questions, Michael Coe of Gamelyn Games and Scott Almes, the designer, are quick to answer questions on BoardGameGeek.

One of the things I like best about this game is how many different combinations there are. With 13 races and eight double-sided terrain cards, there are almost 35,000 ways to play the two player game. More players just allows for more combinations. After that, there are many decisions to be made in each game. Which resources to go after, which areas to defend, and how to spend your resources can greatly change the course of the game.

Most 4X games feature some sort of player elimination, but Tiny Epic Kingdoms keeps all players in the game. If a player falls behind, they’re given a small bonus. It takes a lot to get to that point, but it can happen. There is also the player negotiation aspect of the game, and bartering and planning with the other players is a large part of the game. Debating who to ally yourself with and how much you trust them is a key aspect of the game.

While it’s listed as a 4X micro game, I find that without the Kickstarter Exclusive Content of the Exploration tiles, there is not a strong exploration aspect to the game. This is not a point against it, simply an observation. There is still a lot of game in the box, and between the other three aspects, I don’t feel that it’s needed. The game is clearly not meant to replace other 4X games that take multiple hours per player to play through. This game works great as a quicker 3X style game or a great way to introduce people to expanding, exploiting, and exterminating without worrying about the luck behind exploring. 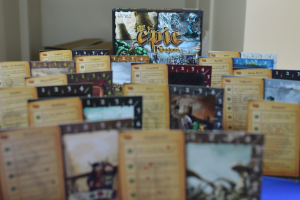 All of the Races in the game

This is a dense game that has many parts to it. The dynamic diplomatic aspect between players, the resource management and usage, and the number of options for the game make this a wonderful introduction to games with these mechanics. If you can “splurge” the very affordable $25 for the game, it can be a wonderful addition to your game collection.

Luckily, Tiny Epic Kingdoms: Heroes’ Call is coming out this summer to Kickstarter. The game adds more races, more terrain maps, and heroes that make each play of the game more unique and greatly enhances the player interaction aspect of the game.