Origins is just two weeks away. While it won’t quite compare to the events of last year, Origins 2015 is looking to be a lot of fun. I’m excited by a number of games that’ll be shown in Columbus.

The official BoardGameGeek Origins Preview is live, and after looking through it and talking with some friends, I’ve compiled a list of games that deserve some time for me at the convention. Their list is still being added to, but that just means more games to look at once we get to the show. Below are the various games that have caught my attention with a short write up about why I’m interested in them. They’re alphabetical by publisher, like the BGG preview list. 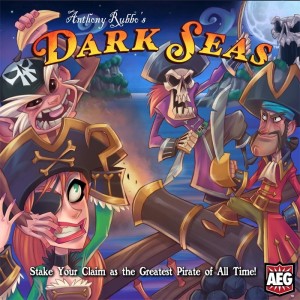 In this game, players go around to various places on their islands, building up reputation by doing pirate-y things. I enjoy dice rolling (no matter how much it doesn’t like me) and this seems like a game that builds up as players expand their islands and get different locations. Maybe Dark Seas will also help me develop my own pirate themed game that’s been percolating in my head for some time. 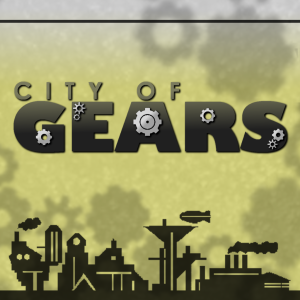 Chris Leder (designer) and Scott Morris (publisher) are both good friends of mine, and City of Gears is a game that I got to play at BGG.Con 2014. Each player gets a number of automatons who move throughout the city using resources from die rolls to perform actions and score victory points. I know there have been some tweaks to the game, but I’ve really enjoyed every game of this that I’ve played and I can’t wait to see how it has improved. 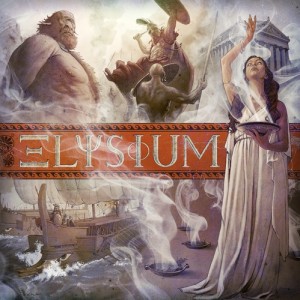 I’m a fan of set collection, drafting, and most mythological themes. Space Cowboys got me hooked with Black Fleet and I am really curious about their first heavier style of game. I know it’s not an Origins release, but it’s a game I should be able to check out at the show. 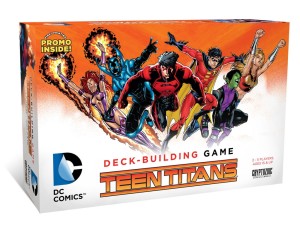 Sam and I have been playing a fair amount of the DC Deck-building game, and we’re both big fans of the Teen Titans, so this is something I can’t wait to see. The game is light and quick, but works great for us, and more cards and characters are always good things for us. 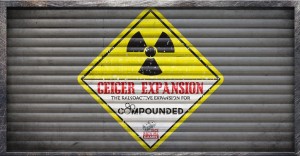 I missed this one because it wasn’t on the official list on BoardGameGeek. I’m really excited to see the final version of the Geiger Expansion for Compounded for two reasons. One is that it’s an expansion to a game I really enjoy that’s by my good friend Darrell Louder. The other is that I proposed last Origins using a prototype, so the game will always have a special place in my life. 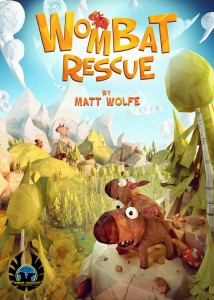 It’s a game with poop cubes. POOP CUBES!!! Matt has made an interesting game that seems to have both strategy and humor. I saw the game at Unpub 2015, but didn’t get a chance to play it. Hopefully Matt has some time to let me check out the game and see how full of crap it is, in a good way, of course. 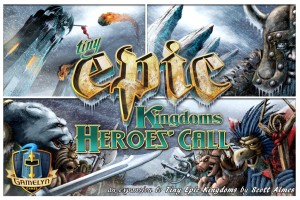 It’s to the point where if a game starts with “Tiny Epic,” I want to play it. I’m a huge fan of the series from Scott Almes and Gamelyn Games and I can’t wait to see what this expansions adds to the base game. At this point, I’d probably buy Tiny Epic Spreadsheets, but let’s not give them any ideas. 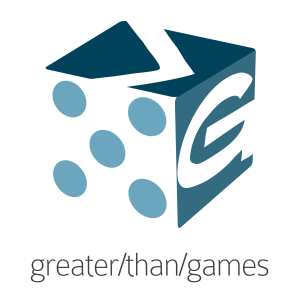 While there is no official box art for Spirit Island yet, it has been talked about for almost a year from the guys at Greater Than Games. It’s a cooperative game where players represent spirits of the island that are defending against the invaders who are trying to colonize the land. It’s a very interesting concept and I trust the GTG team to bring awesome games to the market. 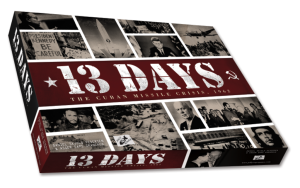 13 Days: A Game of the Cuban Missile Crisis

Two player games are a favorite of mine, especially when players have full interaction and tense moments between them. 13 Days seems that it’s going to offer both of those. Self-described as a game that scratches the “Twilight Struggle” itch in only 45 minutes, this seems like an intriguing card driven political game that I need to check out. 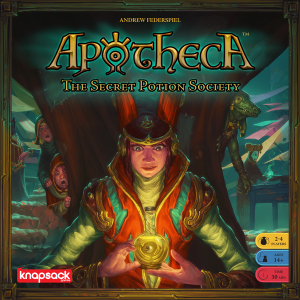 I really enjoy deduction games, and Apotheca seems to be a nice balance between deduction and simple game play. The art is also eye-catching. I’m glad that Andrew at Knapsack Games reached out to me about checking this out at Origins. 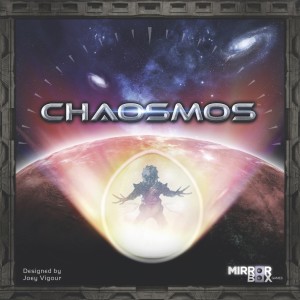 Chaosmos is a game that I saw in passing at BGG.Con after their successful Kickstarter in early 2014. The game looks to be a balance of hidden information and careful planning. The modular board and variants within the game means there are many plays within this box and I can’t wait to start exploring them.

Dark Dealings is a card drafting combat game described as “For Sale and 7 Wonders mashed together,” this seems like a game that will be perfect for me. I also love the art style that they’re going with for this game and the 20 minute playtime will certainly help it get to the table. 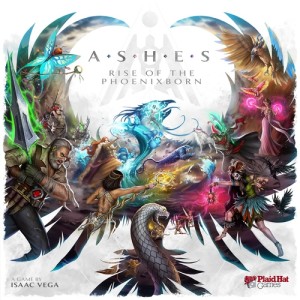 Ashes: Rise of the Phoenixborn

My friend Bryan Fischer of Nevermore Games has been doing regular posts about Ashes: Rise of the Phoenixborn and it keeps increasing my interest in this game. Plaid Hat is known for making gorgeous games that are strategic and challenging, and this seems like no exception. I’m excited to give this one a try. 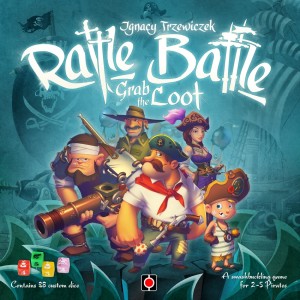 I tried to keep this list to one item per publisher, as there are a LOT of great looking games that are going to take up a lot of my convention, but Portal Games has two entries to preview at Origins that are on this not-so-short list. Rattle Battle Grab the Loot has players rolling custom dice inside the box lid with the results being impacted both by the resulting face and the location in the box lid. 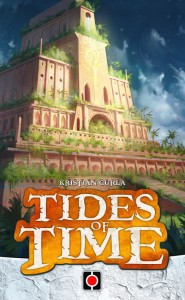 So there’s a lot of things that make me interested in this game. Two player? Check. Drafting? Check. Quick game play? Check. By Portal Games, lately one of my favorite publishers? Check. Gorgeous art? Check. I have to check this out. 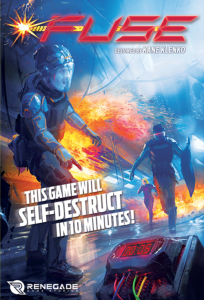 A real time cooperative game with dice rolling. When I first heard about Escape, I thought it would be a goofy time and not a game for me. The first time I played it, it was fun, and led to six more plays right afterwards. Fuse seems interesting in the same way,  but we’ll see how demoing a real time game will work at a convention.

I was intrigued by the idea behind Dark Moon. Rolling dice, getting results, and being honest (or not) about those results is a nice way to change up the traitor mechanic. Formerly known as BSG Express, I like that this is getting an official release and I can’t wait to see how badly I lie in this game. 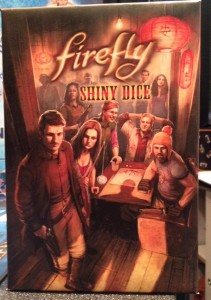 Scott Morris has designed a dice game set in the Firefly universe. I got to play this at Scott’s house and I enjoy the way he’s combined missions and pushing your luck with dice rolling. Hoping for combinations of certain bad guys, good guys, and allies and cursing at your bad luck or your opponent’s good luck is a great part of this game. I can’t wait to see the final version of the game. 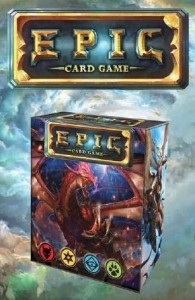 Epic is the next game from the guys at White Wizard, who launched Star Realms. I’m still kicking myself for missing out on that Kickstarter, but I love the game. I can’t wait to see how they change up the pattern with Epic. I love games that have a small footprint and offer a lot of replayability, and this seems like it’ll be a great fit. I’m hoping that they’ll consider providing me a preview copy of the game so that I can do a review of it. 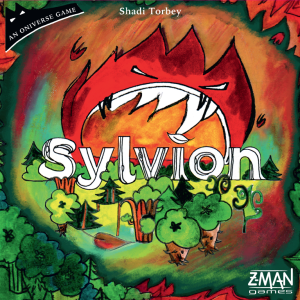 I’ve been enjoying solitaire games lately, and Sylvion seems like it’ll be a very interesting game. It is a card based tower-defense game with a fun art style. I enjoy Onirim, another game from Shadi Torbey and Z-Man games. This seems to be another game that’ll be fun to play and will likely frustrate me when I can’t beat it.

This is far from a full list of the games that I’ll end up playing, but hopefully I’ll get to play all of these games and more! If you know of other games that I need to check out, let me know on Twitter, Facebook, or Email Me!