As much as I enjoy long games with deep strategies, I still love playing simple games that are easy to learn and teach. Qwixx is a recent acquisition that’s a very simple game, but is it simple and fun?

Qwixx is a small box game from Gamewright that includes six dice, 100 double-sided score sheets, and instructions. It’s a very simple idea: Roll the dice and mark off more numbers and get more points than your opponents. But the simple games are sometimes the most fun.

In Qwixx, each player gets a score sheet with the numbers 2 to 12 in red and yellow and 12 to 2 in green and blue. Included with the game are six dice. Two white, and one each in red, yellow, green, and blue. 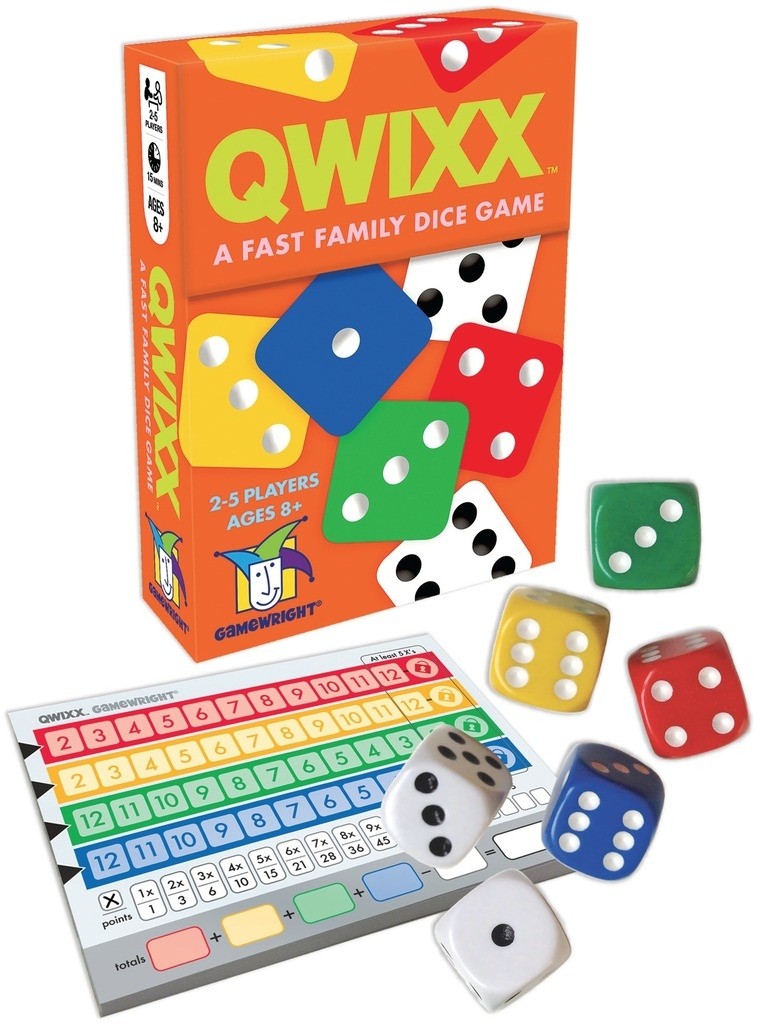 On a player’s turn, they’ll roll all the dice. Every player at the table gets the option to mark off the sum of the two white dice in any row. The active player may also do that, or mark off the sum of either white die and one of the colored dice on the appropriately colored row, or both. If they cannot or are not willing to mark a number in a row, they’ll take a strike. Each strike costs the player five points at the end of the game.

The score card explains how many points are gained for each number of marks. One mark gets you 1 point, two marks gets you 3 points, and so on. Getting all twelve marks in a single row gets you 78 points, but this is far easier said than done. 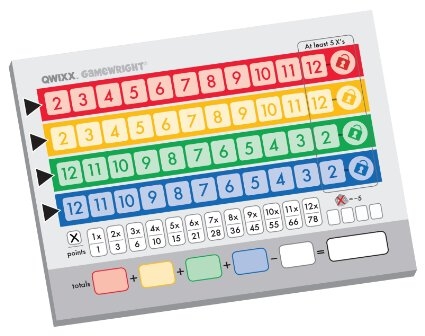 One small rule that makes the game as fun as it is and really makes it shine is simple: Once you mark a space, you cannot mark any spaces to the left of that space. Looking at the above scorecard, if you mark the yellow 4 space, you can’t go back and mark the 2 or the 3. With the odds of rolling a 2 being lower than a 3 and so on until you reach 7, it makes it easy to pass on some early opportunities. But when you get to the numbers that are more commonly rolled, it is harder to justify losing out on potential marks.

When a player has marked at least five spaces in a row, the last spot is available for scoring. Doing this nets the player two marks and removes that die from the game. The game ends when any two dice are removed or a single player has taken four strikes.

The game plays with two to five players and in each case, the game has the same rules and moves quickly. With two players I find there is more strategy as there are more active player turns. In games with more players, there are usually more spots passed over to try to score as many spots as possible. I’ve really fallen for the game, playing it eight times in just two weeks, and it’s been fun every time. I don’t tend to win, but it’s an interesting game that plays quickly and is entertaining. If you’re looking for a light game that’s easy for anyone to learn and fun for everyone to play, consider checking out Qwixx.