Patrick over at Crash Games has a new project on Kickstarter for Paradise Fallen. I was skeptical at first, with no reviews and no videos showing how the game works. However, Patrick sent me a prototype copy to try out and review. 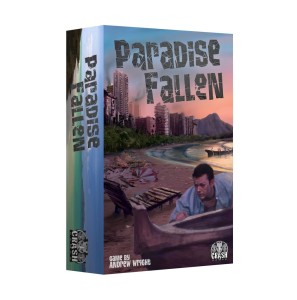 First off, the art in this game is very well done. The illustrations catch your eye and the symbols work well on the cards. The art on the tribe cards in particular is well done.

The gameplay is simple but still strategic. The nine island cards are laid out in a three by three grid. Each card is an island that the players need to visit to win. Players start with their boats on the center island, and play ration cards to move their boat from island to island. There are also island exploration cards in the deck, and these are how you score an island. When a boat is on the Hawaii island, a player can play the Hawaii card to the table. This gets them one step closer to victory and grants a potential bonus to the player. Each island has its own bonus, but they can only be used once and only one bonus per turn. The game ends when a player reaches the goal number of islands explored.

Of course, there has to be a way to interfere with the other players. Aberrations are cards that make movement cost more or force the players to discard cards from hand. Some aberrations are played on specific islands, while others are played between islands as a penalty to travel between them.

Having played a few times with two players, I enjoy the game. There is a subtle strategy in picking the right location to play aberration cards. Each turn has enough strategy to be interesting, but not so much that it leads to overthinking. The rules are short and simple, which makes teaching while playing possible, a treat for anyone who likes teaching games.

While I think Paradise Fallen is a fun game with a nice balance of strategy and luck, I think there are some issues with it. The rules could be clearer on how some of the cards work in the game. The rules also need to be edited so that the sentences and examples contained within make more sense. However, both of these can be easily changed and fixed, and the rules are currently being worked on. Ultimately, Patrick has a really solid game that’s light and plays quickly. I like it so much that I’m backing it. If it looks like a game you could be interested in, check out the Kickstarter page.