When you’re mining the sky and aliens make you cry, under the moon ray – Darkrock Ventures Review

Darkrock Ventures is the first game from Magic Meeple Games. It has players mining for resources in space, planning their actions carefully, and hoping that luck is on their side. Does it suck like the vacuum of space or boldly go where no game has gone before? 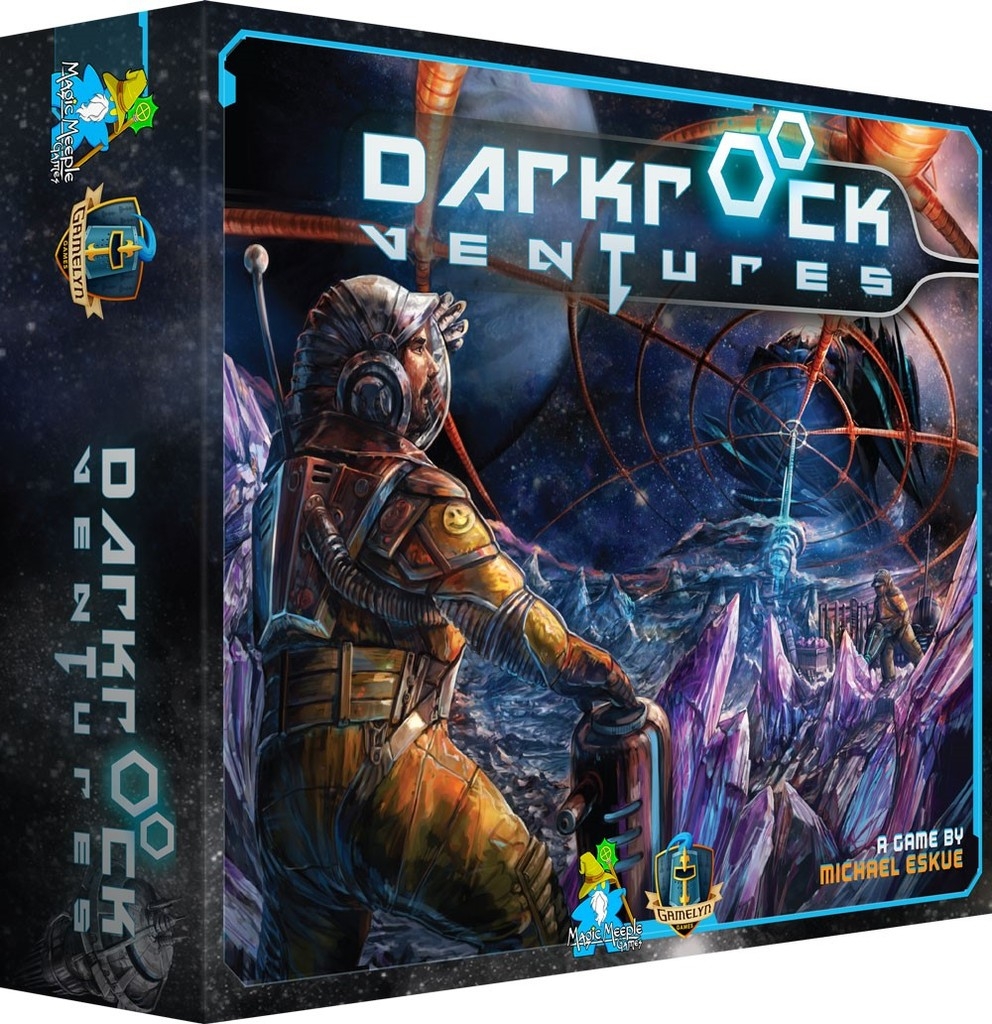 Darkrock Ventures is part worker placement, part luck mitigation, with elements of planning ahead and cursing your poor luck. At least, that’s how it tends to go with me. Players are trying to use their workers to gain money, which is also considered victory points. They do this through collecting resources from mining operations, increasing their chances of mining successfully, adding more workers to help them plan, and ultimately selling those resources for cash. Players will start with three workers each, three spaces for resources, and one rig die. The workers are used to claim worker spaces which are resolved after all players have placed all of their workers, while the rig dice are used to hopefully claim resources. Let’s look at the board.

There are a number of sections on the board, each giving the players some benefit, but we’ll start with the six asteroid spaces in the middle of the board. Labeled with even numbers two through twelve, players must add a communal die with one of their own rig dice to result in a value where one of their workers are to claim one of the iron, cobalt, or platinum at that location. To steal an explanation from the Kickstarter page: 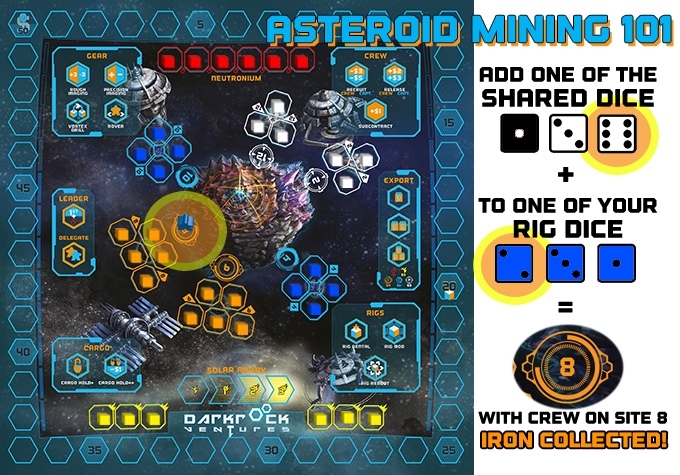 A number of spaces on the board will help players be successful in these efforts. In the Gear section in the top-left, there are four useful spots. Rough Imaging allows a player to add or subtract three from their dice total, where Precision Imaging allows a player to add or subtract just one. The Vortex Drill lets a player flip one of their dice over to the opposite side. The Rover space allows a player’s placed mining worker to move one space clockwise or counter-clockwise, which can help players collect more abundant or profitable resources. The Rigs section in the bottom-right also helps players increase their chances of collecting. The Rig Rental lets a player add another Rig Dice to their roll. Rig Mod allows a player to add two Rig dice instead of one Rig and one Shared die. The Rig Reboot lets a player reroll a Rig die, useful when you can’t seem to roll what you’re after, like me.

The Export area allows players to sell collected resources and collect money, both increasing their scores and giving players more Rig dice. The Cargo section allows players to increase the number of resources they can hold onto at one time. Crew gives players opportunities to purchase more workers, sell unneeded workers, or have them generate basic income. The Solar Array is a slower, less profitable resource track, but it is guaranteed, which can be a worthwhile investment.

The last two spaces on the board are Leader and Delegate. Leader gives the player a Neutronium and the Leader tile, meaning they go first in the next round. Delegate allows a player to use one worker to place another worker where another player’s worker is, meaning that no space is locked from another player being able to join. The Captain workers in the game block delegation to their spots and act as two workers, doubling the return of the space.

One of the twists in this game that make it shine in my eyes is the ability to place workers where you already have one. This allows players to benefit from a space multiple times and can impact the priority of spaces to players. Precision Imaging with two workers will allow a player to adjust the total of their Rig dice and a common die by up to two in either direction. Two workers on the Rough Imaging allow a player to add or subtract zero, three, or six to the total, making the other mining sites viable even with unfortunate rolls. There is a significant change to the worker placement ruleset with just that simple addition and it makes the game unique and makes the strategy more dynamic.

The other factor that changes the game from the usual formula is the Therion Marauders cards. Once any player has exported a resource, each following round will get a random Therion Marauder card. This will list zero to four locations that the aliens are attacking. Each player with one or more workers on those spaces must either forfeit a resource or lose their workers for that turn.

The dice are a large luck factor, but this can be planned around. Seeing higher values in the communal dice will lead players to go after larger values of mining sites. Players can try to block where workers are placed, but with Delegation, no plan can be completely shut down by one player. Gaining more workers early can afford players an advantage, but more plays will help players see more strategies in the game. The game only takes around 45 minutes with new players and can get down to 30 minutes with experienced players.

Darkrock Ventures is the first bigger game from Michael Eskue and the first game coming out from Magic Meeple Games. Michael Coe from Gamelyn Games is supporting the release as well, which lowers any concerns I have with a first time publisher. The game play is quick to learn, interesting, and always keeps players guessing with the dice rolls and Marauder cards. If you enjoy worker placement games, this is a great game to try. If you think worker placement can be dull or predictable, you should certainly check out Darkrock Ventures, up on Kickstarter now. You can also check the game out now through the Print and Play files provided on the Kickstarter page! 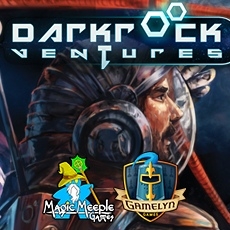