I’m not someone who really enjoys party games. I like rules, structure, and expected results. When you add bartering to a game, I tend to lose interest. But I’ll usually give them a shot, so let’s talk about Sheriff of Nottingham, a social game of legal and illegal goods, bartering, and broken promises. 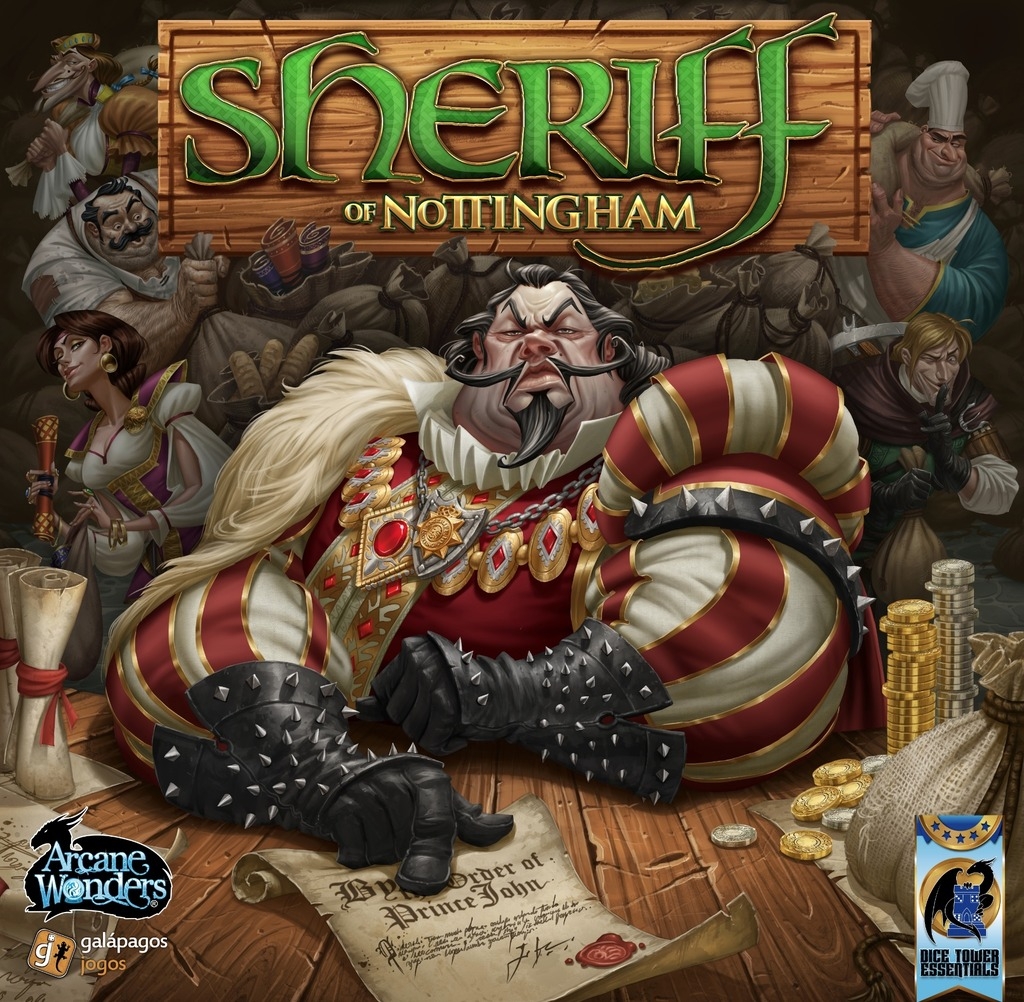 Sheriff of Nottingham is a social game where players are merchants trying to sell legitimate goods at the market. Of course, illegitimate goods will tend to fetch more money, but there’s also a risk associated with them. After every player has been the Sheriff twice (three times in a three player game), players count up their sales, note the bonuses they get for having the most of specific goods, and count up the value of their contraband. The player with the most money at the end of the game wins.

At the start of the game, players will receive hands of 6 cards which are legal and illegal goods. Each round, merchants have an opportunity to discard and draw to improve the cards in their hands. When players discard and draw cards, they can choose to pull from one of two discards or the main deck. Taking face up cards from the discard helps when a player is after a specific type of good, but cards must be taken from the top down, resulting in cards you may not want. Face down cards from the deck help when a player wants to hide what they’re getting, but the cards may not be what is needed.

Players will then take their cards and put them into small bags with snaps and, one at a time, will hand their bags and declare the number of goods and the type of good that they are bringing to the Sheriff. The player cannot lie about the number of cards, but what is in the bag is frequently embellished. Then the game opens up to negotiations, threats, promises, and lies. The Sheriff has the opportunity to open any or all bags that have been presented by the merchants. If the Sheriff opens the bag of an honest merchant, the Sheriff pays the merchant a penalty based on the cards in the bag. However, if the merchant tried to smuggle anything past the Sheriff, they pay a penalty to the Sheriff and lose the contraband. If a merchant smuggles ill-gotten goods past the Sheriff, they are allowed to score them at the end of the game, but they are kept face down until then.

After all bags have been opened or returned, the role of the Sheriff passes to the next player, all players refill their hands, and another round is played. At the end of the game, players reveal their contraband and count up their goods. There are bonuses for having the most of each legal good – Apples, Bread, Cheese, and Chickens.

The rules of Sheriff are simple and quick to learn. The real game comes when the players start offering bribes and verbal contracts with the Sheriff. The only thing not allowed in the game is offering cards still held in the hand. Previously claimed goods, money, contraband, and future promises are all valid barter goods.

When the game was first explained to me, I was concerned that it was going to be a game that relied on the social aspect of the game. I can gladly say that the social aspect is strong and makes this game more fun than I could have imagined. Terrible fake accents are all but required when I play this game. Wild accusations and innuendo are also a large part of the games I’ve played. One of the goods available are chickens and players place their goods into bags, which results in very crude jokes and frequently a lot of laughing. The social aspect isn’t the entire focus of the game though. Trying to smuggle certain goods through at key times is important. Knowing how different players act as Sheriff is also an important part of the game. Finally, loaded statements are very useful in this game. For example, what would you do as the Sheriff if a merchant said

I have four freshly baked loaves of bread in this bag, Sheriff. If you let me through right now, I’ll give you one of the contraband inside.Baker

If the merchant has contraband inside, they could be caught and you could gain profit from their illegal activities, but if they don’t, you would owe them money instead. Of course, if you let them through, you get one of the contraband cards they have inside, but only if they have one. If there is no contraband, then you’ve gained nothing.

I really enjoy this game, and the way that players act as the Sheriff makes the game very replayable. There are also promo cards which add bits of more chaos to the declaration phase. For example, the Royal Summons is a penalty of eight gold if the merchant is inspected and the Royal Summons card is the only card they weren’t honest about. However, if it gets smuggled through, it’s not worth any money at the end of the game. Of course, if a player does smuggle it through, they can freely offer a contraband card as part of a bribe. 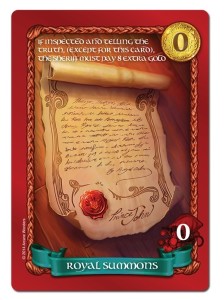 I taught my buddy Brian Sheriff of Nottingham at BGG.Con 2014 and he liked it so much, he decided to do a comic about it over at D20Monkey.com. If you enjoy RPGs, geek jokes, and awesome stories, you should check out his webcomic.