War Never Changes – A Preview of the Omen Saga

Games that are for two players exclusively always seem to catch my attention. The game can focus on the interactions between the two players instead of worrying about balance for multiple player ranges. Small box games also draw me in for being easy to travel with. Omen checks both of these boxes, and it has quite a history. The new take on Omen revamps some of the rules and offers the game to a wider audience. Let’s take a look at the base game. 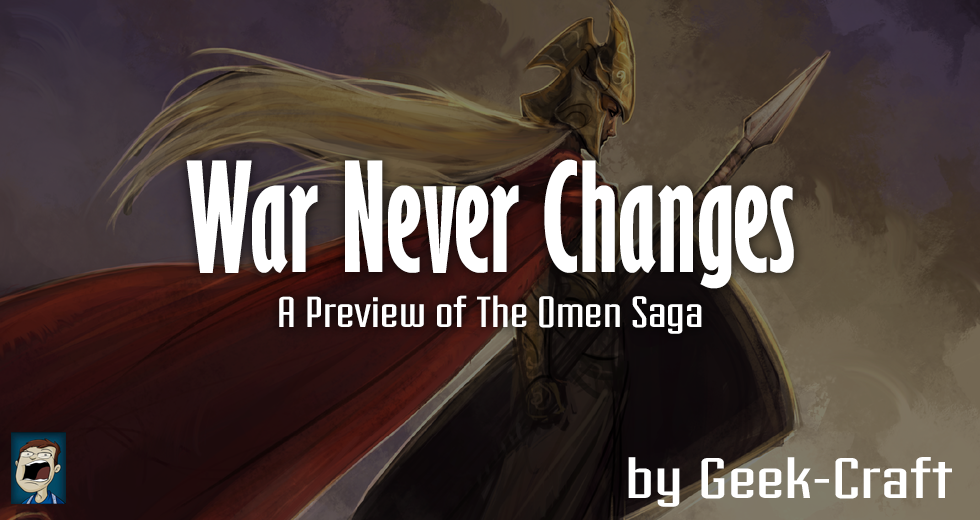 Omen has been on Kickstarter a handful of times, usually offered by smallboxgames. The game had grown and gotten a lot of attention, but never really made it big. Kolossal Games has picked up the title and has it on Kickstarter now. For this review, I’ll only be covering the core game, but we’ll talk about the expansions later. I’m also going to cover the differences that they have introduced to make the game more coherent.

At the core, Omen is a simple two player card game. Players draw cards from a shared deck, gain gold to spend on units, and try to outperform their opponent. The deck is made up of Soldiers, Beasts, and Oracles. Each type of card works slightly differently – Soldiers have Deploy abilities which activate when they are played. Beasts have a Dirge ability, which only activates if the player pays for the card and discards it. Oracles have Portent abilities which activate each round. 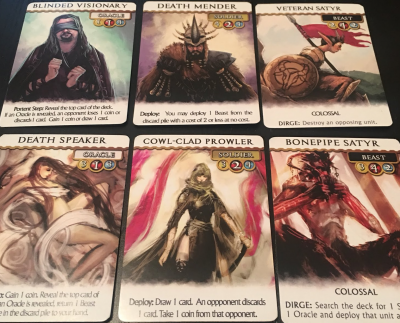 Each player’s turn is made up of six steps, which seems like a lot. However, the flow works and players will pick up the way it works after only a few turns. The steps are Wealth, Surge, Portent, Feat, War, and Offering.

In Wealth, players get to gain coins or draw cards. Cards are new characters that you can play, but you also need coins to purchase and use them. A player gets three actions for this step, but if they spend all three actions on the same resource, they earn a bonus action to be used on that resource. Players must choose between getting the extra resource and diversifying their gains.

Surge is the main step of the game. Players will play their characters to the board after paying for them. There are a few interesting parts around this step. There are three cities between the players. When you play a character to a city, it may result in that city becoming war-torn, which means later on the players will fight over the city and try to claim one of the bounties there. Soldiers are generally straightforward. They get played and abilities are triggered. Beasts have powerful Dirge abilities, that only activate when they are discarded instead of played into a city. Soldiers and Beasts generally have stronger Strength values, which are referenced in the War step. Oracles give you bonuses during the Portent step, but generally don’t have much Strength. A player can only have five Units worth of characters on their side of each city. Beasts count as two Units for this check, while Soldiers and Oracles only count as one each.

During the Portent step, Oracle abilities will activate. These can range from gaining cards and coins to removing cards from your opponent’s side of the city or hand. These abilities give a player more resources, but usually won’t help you win the game. 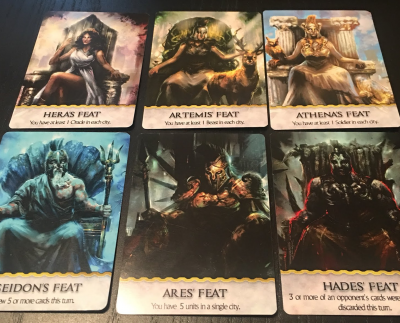 The Feat Step introduces one of two ways to end the game. During the Wealth, Surge, and Portent steps, players track six different Feats. For example, if you’ve managed to draw five or more cards in a single turn, you’ll complete Poseidon’s Feat. Each completed Feat is worth two victory points. If your opponent has accomplished five Feats, the game will end at the end of your turn. This gives the player who is behind a chance to go big and try to make up any difference in scores.

The War Step includes the other end-game trigger. Each of the three cities at the beginning of the game has four bounties. When a city becomes war-torn during game play, the player with more strength will earn one of these bounty. A city becomes war-torn if there are five or more total units in the city or if your opponent has three or more units on their side of the city. These bounties are worth two victory points if they remain unused; however, a player can activate these powerful abilities to help turn the tide of the game, but they then become worth only one victory point.

Finally, the Offering steps allows players to discard a single character from their hand and earn coins and / or draw cards. The player does not get any bonus action during this step as they do during the Wealth step, so players will likely diversify their gains in this step.

While the six steps described above are each a little wordy, the overall flow of the game picks up quickly. Player turns will take little more than a minute or two each. This back and forth keeps the game interesting, as players will try to out-maneuver, overpower, and outfox their opponents.

There are a few key differences between the original editions and this latest take. Primarily, the bounties earned during the War Step are no longer cards that go into the hands of players, but instead are tiles that remain in front of the player. This combined with a hand size reduction from seven to five cards means players don’t lose hand slots to the bounties. During the Portent phase, players used to only reveal the top card of the deck, resulting in either combos that used the same card to trigger abilities or revealing knowledge about what card was going to be drawn next. They have changed this so any time a card is revealed through an Oracle ability, it is discarded from the deck. One of the other big changes is the addition of reference cards. This helps the game flow better by giving players the turn order structure, how keywords are used on the cards, and how the end game is triggered. This simple addition makes a good game easier to learn and faster to play, both significant improvements on an already interesting game.

One of the issues that I’ve seen with this game is that as everything is text based and all character cards are unique, players have a lot information to digest. The cards in their hands, the cards on the board, and the cards revealed throughout the game can be a lot to remember. The three initial types of characters each acting differently can also throw some players off as you have to remember a slightly different ruling for each type. Finally, there are a lot of different ways to play this game. In just the core Reign of War game, there are optional Spirits and Heroes, each which play differently than the previous character types. The other expansions add even more options, which can get overwhelming for players. 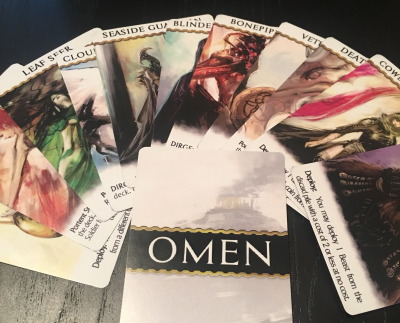 If you’re a fan of two player competitive games, I highly suggest you give the Omen Saga a look on Kickstarter. It has some complexities to it, but the overall game play is both quick and rewarding. Games can go back and forth between players of equal skill and there is a real sense of accomplishment when you’re able to conquer your opponent. The art in the game is wonderful and the small touches that Kolossal is doing to make the game even better make it a new version of a game that was already very good to begin with. 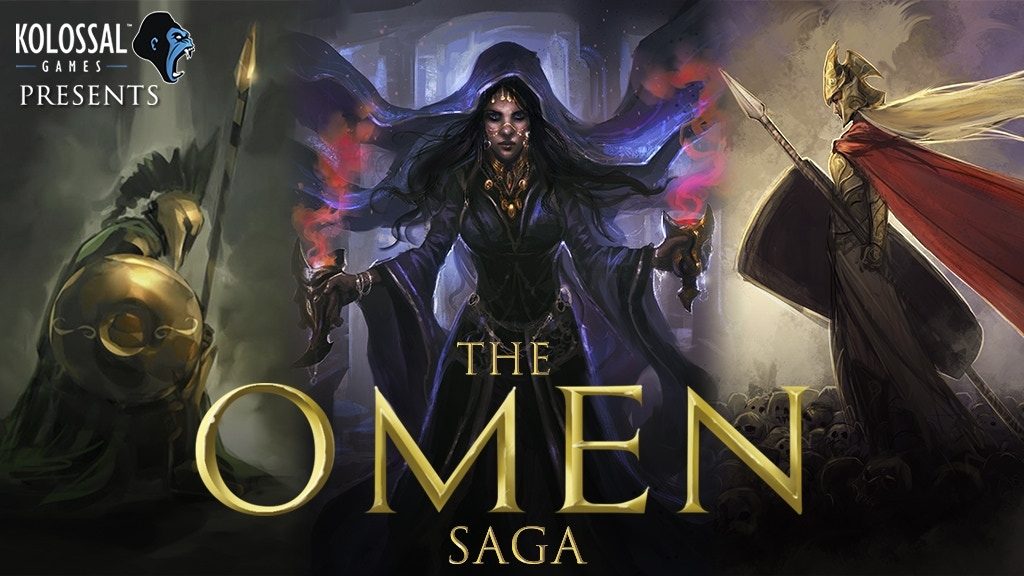