Anything you can make, I can make better – A Preview of King’s Forge

When the guys at Clever Mojo games have a prototype at a convention, I’ll go out of my way to make sure I get to try it. Last year at GenCon I got to try King’s Forge. The game is currently up on Kickstarter, as of August 1st, and is already funded.

In King’s Forge, the goal is to be the best blacksmith in the land by showing the King how well you can craft the items in the game. In three or four player games, the first player to craft four items is the winner. In a two player game, five items must be crafted to claim victory. 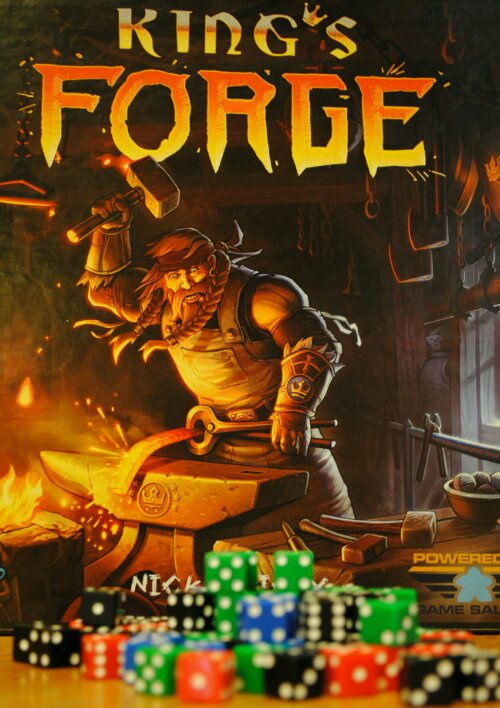 There are two phases to each round: Gathering and Crafting. During the gathering phase, dice are used to activate abilities on the cards on the table, usually gaining the player more dice. Dice gathered usually go into the player’s storage and cannot be used during the rest of the current round. During this phase, the values on the dice don’t matter, only their color. Some abilities require more dice than others, while others require certain colors of dice to be used. Other abilities aren’t for gaining dice, but instead give other abilities usable in the Crafting phase. For example, in the North Mine, two dice of any color can be used to gain two black metal dice or the ability to re-roll dice in the Crafting phase. If the second option is selected, the die on the X will be returned to the bank. The Bazaar is a great card for red gem dice, either through the use of 5 of any color or 2 green wood dice. The Alchemist will allow you to either use a red gem, a red gem or blue magic, and another die to gain a blue magic, one of the hardest dice to obtain in the game. The other option allows a die to be increased in value during the Crafting phase by one. The East Forest allows the player who selected it to get a green wood die, or to increase three different dice each by one later during the Crafting phase. 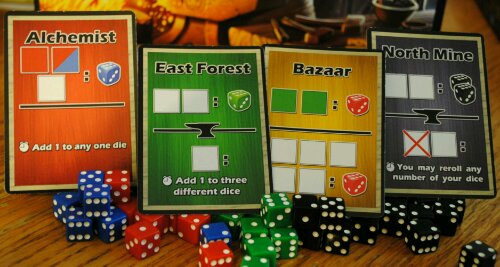 In the Crafting phase, the dice not used in the Gathering phase are then used to try to craft items. This means that if you’re planning on crafting an item, you’ll need to reserve at least some dice during the Gathering phase. The items crafted have various requirements, both in value and color of dice. A simple Anvil only requires three black metal dice, each 2 or higher, where the Sword of Destiny requires a 6 on a blue magic, red gem, green wood, and black metal die. The abilities mentioned earlier for the Crafting phase help make crafting the Sword of Destiny a little easier to craft, allowing dice to be increased in value or a reroll to occur. Of course, just because one player makes one of the items doesn’t mean that another player can’t make a more impressive display and take the credit for making the item. When an item is crafted in a round, the other players are able to steal the card away from the original crafter if they can make an item that is made with higher value dice. For example, if I craft the Anvil with a 3, 3, and 4, another player can steal it from me if they roll higher in the same crafting round. 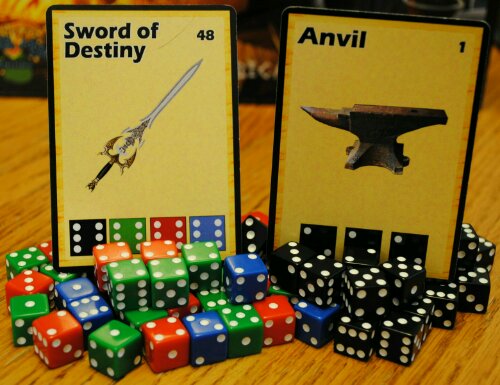 Items to Craft in King’s Forge

There are many strategic points in King’s Forge. When players are taking turns in the Gathering phase, taking an ability that an opponent wants is usually a smart move. Watching the dice that your opponents have is also important; if they’re saving dice back for the Crafting phase, it may be a good time to stock up on dice for the following round or hold back and try to out-craft them, taking the credit and getting one step closer to winning the game. Going first can be a big advantage in the Crafting round, but allows the other players to steal the items you craft.

When I first heard about Forge I was really intrigued and when I played it at Gen Con 2012, I knew that as soon as Clever Mojo games put up the project on Kickstarter that I would be backing it. I was also fortunate enough to receive one of the review copies and have been enjoying playing the game with my friends. There’s a part of my that looks forward to sending it on to another reviewer to try it out, but the other part of me doesn’t want to pass it on. The balance of dice rolling and resource management is very well done, and the variety of Gathering and Crafting cards keeps the game fresh even after repeated plays. King’s Forge is a fantastic game and if it sounds like something you would enjoy too, you can check out the Kickstarter here. For only $39 you can secure a copy of this game. 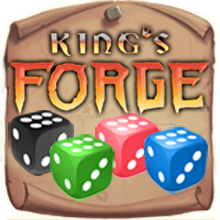