Tiptoe through the turnips – A preview of Mr. Cabbagehead’s Garden

If you haven’t herb of it, Mr. Cabbagehead’s Garden is a strange game. There’s no way around that. But it’s one that has been around for a while as a print and play, but now LudiCreations is bringing it to the hobby market. It’s a game where you’re a vegetable with a vegetable garden, but should you carrot all? Has this bean done before? Or are they producing a new and interesting game? Lettuce see. 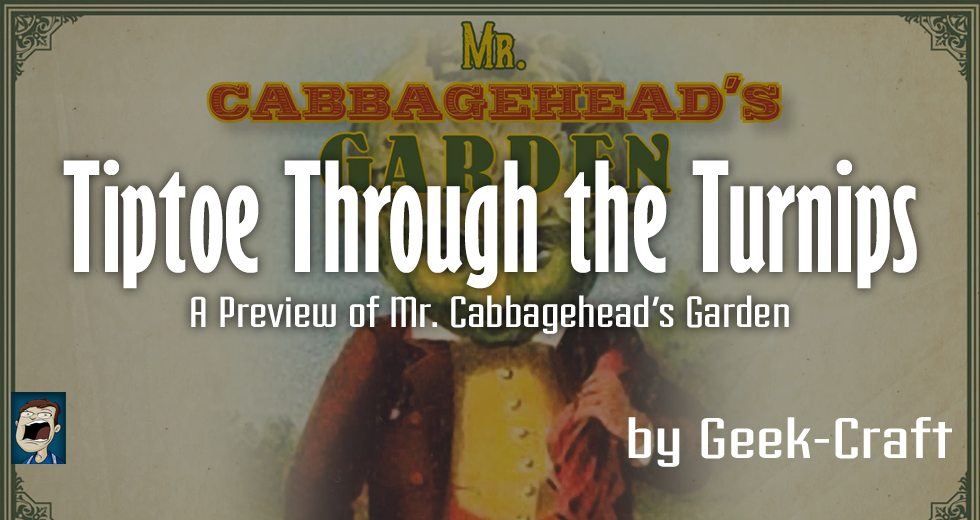 Solo games are often designed in one of two ways – Either there is a target score or there is an AI / Automa / fake player that you have to beat. Mr. Cabbagehead’s Garden is mostly a target score, but the nosy neighbors in the game are frequently too smart to be considered simply random.

In this game, the player takes on the role of Mr. Cabbagehead and works on making his garden as good as they can. They do this over 15 rounds. Your goal is to achieve a high score through the plants and how you’ve set up your garden. For example, each Turnip in your garden is potentially worth 8 points, but only if it’s adjacent to another Turnip. With nine different plants in the game, setting up groups to score them can prove difficult. There are also bonuses for designing your garden in an aesthetically pleasing way. For example, if you have a row with 6 different vegetables, you’ll earn 12 points for “The Bounty.” There are a number of Merit awards, some being quite rewarding.

Of course, the game would be far too easy if it was just selecting cards and laying them out. In order to plant a given card, you first have to have the appropriate insects to help pollinate. This is quite simple – on each turn there are three cards to choose from. The leftmost card requires you to place a bee from your supply back on the hive. The rightmost card requires you to take a bee from the hive and place it into your supply. The middle card requires no bees to move. This ebb and flow can impact what cards you take, especially if you want to get an extra 6 points at the end for accomplishing “The Bee’s Knees” by having all bees in your supply.

There are also the neighbors, who will do everything they can to ruin your perfect garden. After you plant a card, you reference the unselected cards to determine how many neighbor tokens you’ll reveal. At the end of each round of five turns, the neighbor with the most tokens will come visit. Of course, they clearly feel that they know how to garden better than you do, so they’ll just do some fixing. For example, Sallie Toomy-Oughtoos will take the vegetable with the lowest Vegetable number. This can easily wreck your entire set up, both for having groups of plants to score as well as the different Merit awards. Fortunately, if there is a tie for the neighbor with the most tokens, they’re too busy talking with each other to come and “assist” your gardening efforts.

After three rounds, the player will have between 12 and 15 vegetables in their garden. They then total up their plants that are worth points, add in their Merit awards, and compare their score against the ribbon chart used by The Garden Club. A score of 101 or higher results in a rousing hurrah and the blue ribbon. My best score is 78, which got me a yellow ribbon and cordial applause.

There is a two player variant where players will each build gardens. The flow of the game is interesting and not too different from the solo game. For the Kickstarter, there are also six new neighbors who aim to ruin improve your garden. I haven’t quite mastered the original neighbors, so I haven’t played with the new ones. Looking over them, they range from similar effects as the original four to neighbors that will rearrange the cards in your garden so there are no lone vegetables. Finally, they’ve also added two other expansions – Grasshoppers and Romancing Eudora. I’ve not played with these either, as I’m still trying to earn my first blue ribbon. 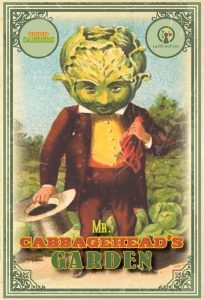 If you want a game with a lot of strategy and a consistent sense of victory, this may not be for you. The randomness of the vegetables, the chaos caused by the neighbors, and the rage that comes when they destroy your plans weigh heavily in this game. I’m not saying there isn’t any strategy, just that there is a fair dose of luck and chance added in. If you enjoy solo games, you should check out the Kickstarter and give it a read over. If you’re looking to try the game out, they’ve set up the game on Tabletopia. This is a great way to try the game without even doing a print and play! I’ve enjoyed the plays of the game I’ve done, although there may have been some choice words uttered when The Mayor of Onion Town ruined my plans in one game. It’s relatively quick, has a very unique theme, lovely (and slightly strange) art, and gives a player a need to keep coming back to do better with each play.