And on your left… A preview of Villages of Valeria: Landmarks

Villages of Valeria is an engine building game with action selection that feels like part Race for the Galaxy, part Glory to Rome, but still feels like its own game. There’s a Landmarks expansion on Kickstarter now. Are these Landmarks worth visiting, or should you drive on by? 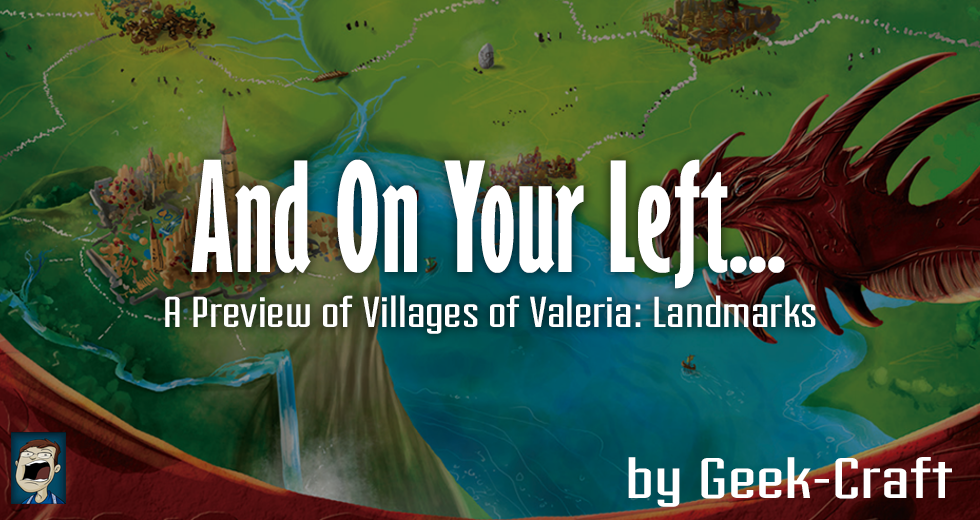 Villages of Valeria is a game for 1-5 players who are trying to build buildings and develop resources in order to outperform their opponents. The heart of the game revolves around an action selection system. On a player’s turn, they’ll choose one of five actions. The other players may then follow to get a worse version of that action or do nothing.

Harvest allows the lead player to draw three cards into their hand, while followers only get one card each. Develop lets the lead player add another resource to their kingdom by discarding one card, where followers have to discard two cards to do the same. Build is the main action of the game, and the leader gets to draw a card after building where the other players don’t get any benefits. Recruit is how players will get various characters into their villages, with the leader paying one coin and others paying two. Finally players can select tax, gaining a gold from the supply and drawing a card for leading or just getting a card for following.

Timing is a large part of doing well in Villages of Valeria. Timing your actions to make it so your opponents can’t take advantage of your lead actions means you get more benefit and they have wasted actions. This changes drastically with the expansion, adding another option on non-active turns. Instead of following the lead action, the other players may now discard a card or two from their hand to build a landmark. These landmarks do not count towards the end game trigger, but can be worth points. Newly added characters can also score points based on these landmarks.

The added options do make each non-active turn more fruitful. Instead of losing three cards from your hand on a develop action you don’t really want to do – one for the developed card, two for the payment – players can now discard a single card to get a landmark and still benefit.

Aside from new buildings and characters, this expansion also adds Architects. These act similarly to the Lords in Valeria: Card Kingdoms and give each player a hidden method of gaining points at the end for various types of buildings.

Having played this expansion with three and four players, my main concern is that Villages of Valeria isn’t what I would call a fast game, listed at 45 minutes, and the expansion adds more options and more decisions. In our games, we ended up taking about an hour. This is not a bad thing, as the game does move quickly, but it still changes the game. All of our games with the expansion have been fairly close in scores, including one that went 40 / 40 / 38.

The main example of a game that did not have close scores ended 40 / 38 / 37 / 19. The player who ended up with 19 points started the game with many buildings that cost four or five resources, meaning they had to spend time to develop or draw more cards where the other players were up and running immediately. I’m wondering if a house rule variant with drafting the opening hands would be a good way to handle that issue, and I’ve suggested this to Daily Magic Games.

Overall, I think this expansion adds to the game and allows other options. It’s not something I’ll use everytime I play the game, but it’s a nice change to the flow of the base game. If you enjoy engine building games or enjoy the original, I’d highly suggest checking out Villages of Valeria: Landmarks on Kickstarter until May 18th! 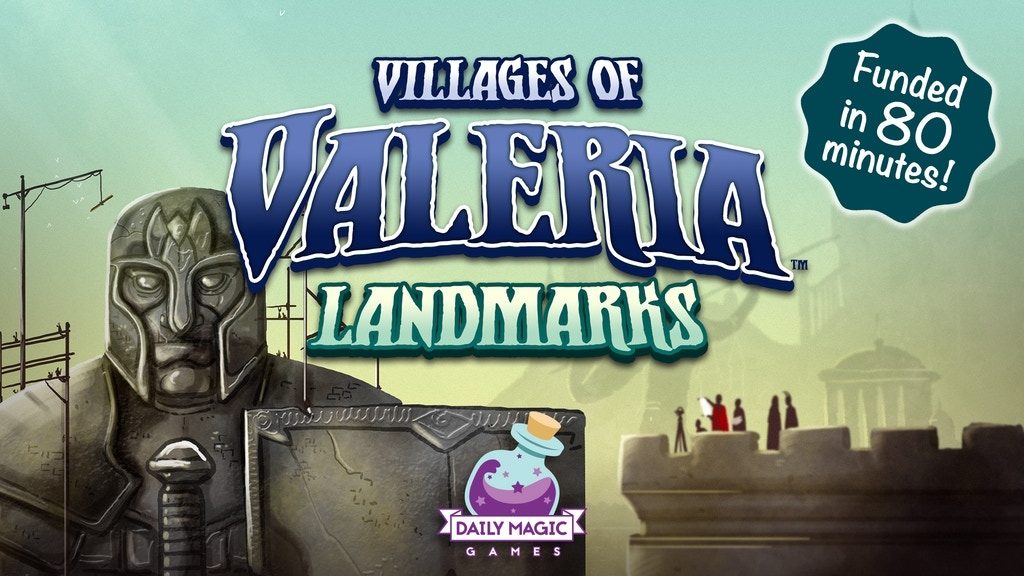