Dollars to Donuts launches today on Kickstarter and I was fortunate enough to get a chance to play it. Is this a tasty treat or just a stale let down? Let’s find out! 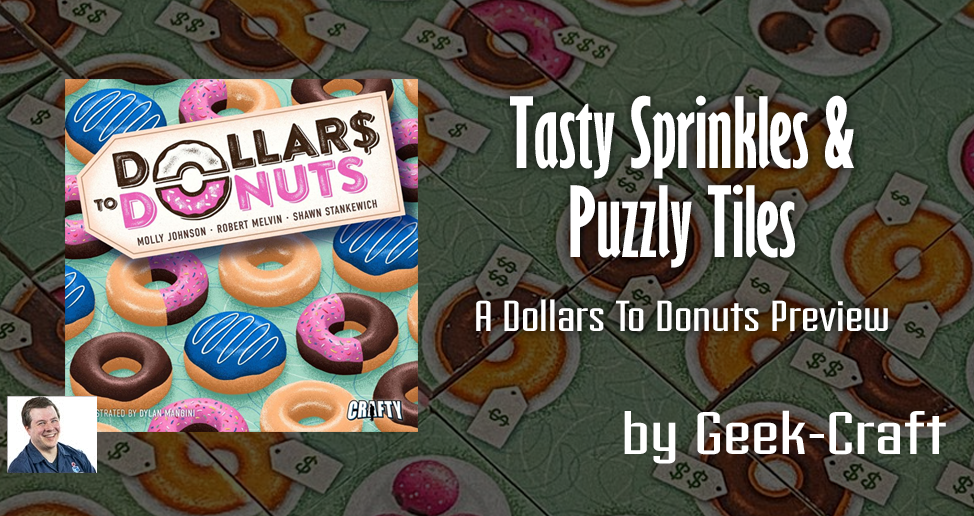 Dollars to Donuts is a 1-4 player game that has players making donuts and selling them to try to make the most money by the end of the game.

This game combines some board filling and puzzle aspects with patterns and tile placement. The tiles in the game are 4 x 1 squares in size, with half donuts along the outside. Each time you match up two halves of donuts that match, you get a donuts from the supply which can be used to fulfill an order from a customer. Each time you don’t match, you get a number of 1 x 1 square tiles equal to the more expensive option based on the two halves used to make the mismatched donut. Each long tile is set up differently, so there will be half donuts left over around your board even if you do a perfect job. The 1 x 1 square tiles can be used to fill in spots and make more donuts or get the player end game points for having donut holes.

In the game there is a market board which as it refills, unused tiles become cheaper. The small square tiles are also currency which is spent to get access to more of the larger tiles. This board gives players some ability to plan ahead, but even with only two players, the board keeps changing quickly and gives the players different options each turn.

The game can be broken down into four simple steps, as illustrated by Crafty Games. 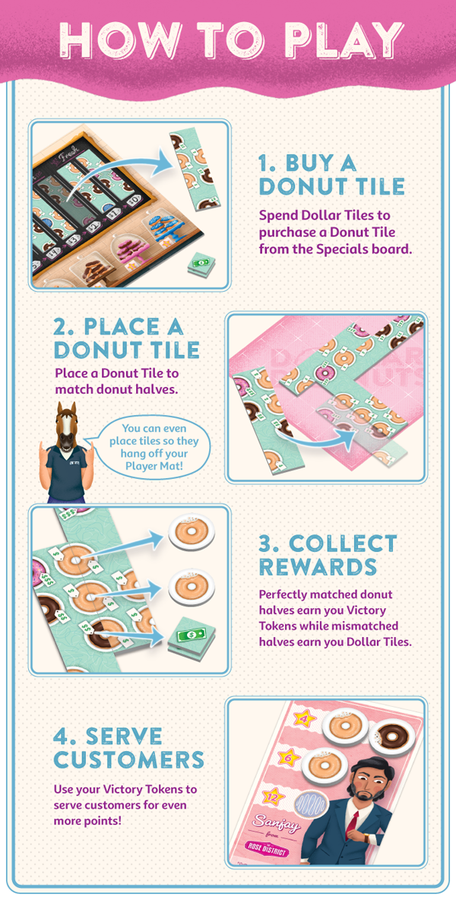 Dollars to Donuts – How to play

The tiles can hang off of the board, which took a bit of getting used to at first; however,  in order to better fill your board, it is a necessary evil. It works out, but for players of Patchwork or similar games, it takes a moment to get used to this difference.

Speaking of Patchwork, Dollars to Donuts is bound to get comparisons, but it’s a very different game. The goal is still to fill your board to avoid penalties, but the focus of lining up tiles against each other instead of filling everything in perfectly is a big difference. I really enjoy Patchwork, and this game is just as much fun. I think it has a lot of potential, especially as it plays 1-4 players. I only played it with my wife, but I look forward to trying the game with more players. Manipulating the market and watching the donuts that other players have becomes more important, but planning should still be an important part of the play with more players.

I think the only issues I had with the game were that it goes a little quickly, but that’s certainly not a bad thing. The other issue is that the donuts in the prototype version were square tiles, which led to them getting confused with the 1 x 1 square tiles that are used to buy larger tiles. In the Kickstarter version, the donuts are round tiles, which will remove that hiccup.

Dollars to Donuts is a very puzzly game with a little market manipulation that has players making donuts and hoping to fulfill orders from customers and filling their boards. The game rules are quick to pick up and easy to learn and teach. It has enough game to be fun for gamers but still easy enough for non-hobby folks to enjoy playing. I’m also curious how the solo mode works, as that wasn’t included with the prototype that I got to play. The art is great and the minor issues I have with the prototype have been addressed in the Kickstarter, so please give it a look if this sounds like the kind of sweet treat you’d enjoy.