A Universe in your Pocket – Twin Stars Review

I’ve really been enjoying solitaire games lately, and I’ve always enjoyed the way that Button Shy Games creates big ideas in tiny packages. They create wallet games, usually just 18 cards, but the gameplay can be very impressive. Does Twin Stars meet expectations or does it end up in a black hole?

Twin Stars is a very small game in terms of components at just three cards per game. Two character cards and a scenario. The current Kickstarter has four different scenarios, meaning you can do each of the six scenarios with any combination of the twelve characters for 396 ways to play.

Each scenario has a suggested set up of characters, but the rules across all the games are fairly consistent. You’ll roll two dice, assigning one to each character. This will show an icon and / or a special ability. When the icons from both cards match an action on the scenario card, you’ll do that action. Otherwise, you’ll reroll one die, reducing the other die by one, and continue until you hit a combo. Each character has a different setup as well as a different special action that can be crucial to winning the game. For example, Inzill Mey can spend energy to heal characters, keeping them alive and helping you take slightly bigger risks.

The scenarios are inspired by various staples of the sci-fi genre, such as stealing plans or escaping from the brig. The characters are colorful and have some clear inspiration as well, but they all fit the universe that Jason and Mike have created. The game play can be a little simple at times, and choices obvious, but it’s still an enjoyable system and having a big risk pay off is exciting. Watching the characters fail can be disheartening, but since the games are so quick to play, giving it another shot is easy to do.

There are two issues I have with the game. The first is that for each scenario, you have to provide a number of tokens. These can be coins, buttons, little balls of lint, or whatever you have laying around. You also don’t get a set of dice for performing the skill checks and actions in the game. This is a minor complaint, as I have lots of spare parts from other games, especially dice, and there’s a $20 level to get custom tokens and all the dice you’ll need on the Kickstarter. The other issue is that the game is a little fiddly. The little bits that track a character’s health could slide, for example, but given the tiny nature of the game, this is not a big deal. If a space alien were to ruin your game, just set up a new one a little farther away. 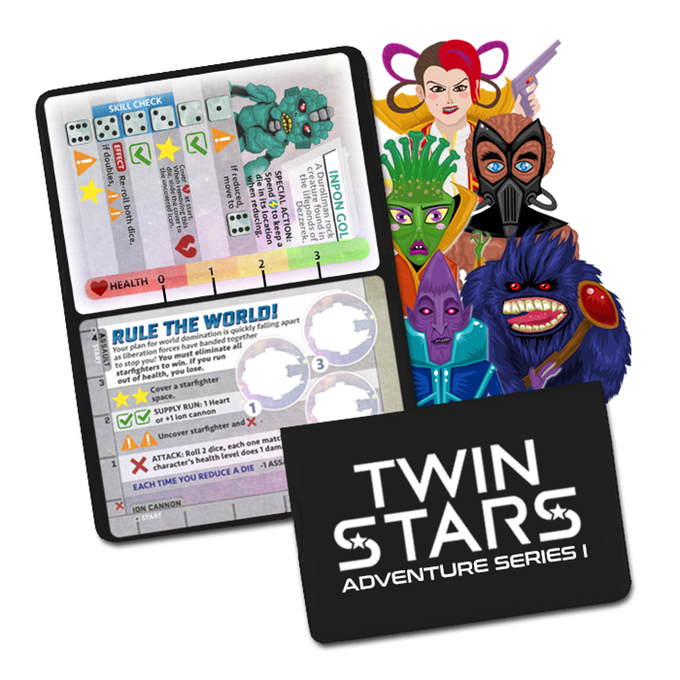 If you enjoy small solo games that will fit in your pocket and offer you a ton of replayability, you should give Twin Stars a look. There’s even an option to get everything for $3 as print and play files, meaning you can make your own copy at home. Of course, you can also get any of the other wallet games through this Kickstarter as well. Some personal favorites are Avignon, Cunning Folk, and Pentaquark.

The bad news is that there’s only about a day left to back this on Kickstarter! Go check it out now!