One of my favorite things about board games are the discussions after the game is put away. You talk about strategies, why you enjoyed the game, what you didn’t like, and all those fun little details that don’t generally make it into a review. I’ve decided to fix that with First Impressions!

My idea is pretty simple – Get some folks who enjoy talking about games to play a game a few times, let’s say three or less, and get together and talk about the game. Each contributor will have played with other people, meaning my experiences with a given game will differ from other folks. We’ll discuss what about the game caught our attention. What we think about the art, the graphic design, the layout, the rules, and the components. We will talk about the rules and what didn’t make sense to us. We’ll talk about what we think of the game after only a few plays and how likely we are to play it more.

Then about a month later, I want us to meet back up and talk about the same game. How often has it hit the table again? What has changed with strategies? Is the game more fun now that you know what you’re doing? Or maybe the strategy is pretty straightforward and it’s not as exciting as those first games.

I think this idea will help show not just the quick “This game just came out so I have to review it” view of a game, but the lasting power. Is a game still fun after 5 plays? 10? 50? Does it change and evolve based on who you play with? Does it have lasting power? It also gives us a chance to all talk about a single game and since we have different opinions, it’ll help you figure out if a game is for you or not. 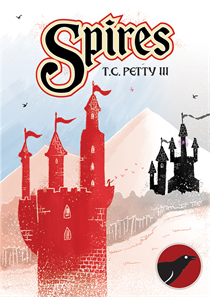 After some technical difficulties, we decided to record a session instead of doing it live, which worked out just fine. It’s now up on YouTube and you can see it here!

So give it a watch, like / subscribe / thumb / whatever the kids are saying these days, and if Spires seems like something you would enjoy, enter the contest!