I recently did my inventory, and while it’s not 100% complete, it’s most of the way through, and I’m finding that there are just a lot of games that I own and haven’t played. I feel that this isn’t right, so I’m making a push to play new games.

Yesterday I managed to get a bunch of new games to the table: Sushi Go!, Zooloretto The Dice Game, Havok and Hijinks, Cubist, and Lords & Ladies. As these were first plays of each game, I’m not going to post full reviews, but I can give some first impressions. 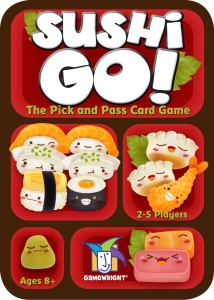 Sushi Go! is a fun and very light drafting game. It reminds me a bit of 7 Wonders, but I think it would be much more approachable to non-gamers. It is very accessible and quick to pick up and play. I really liked playing it and at only $12 MSRP, there is a lot of fun to be had for the cost of a few cups of coffee. It’s very much worth trying and I can’t wait to play it more. The simple drafting is still enjoyable to hobby-level gamers and the game plays incredibly quickly, leaving players wanting to go another round. 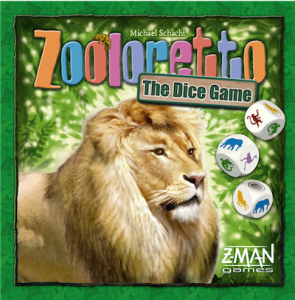 Zooloretto The Dice Game is a simplified version of the full game with a bit more randomness and a more forgiving element of chance. The game still revolves around collecting animals, but now each player is after the same number of each animal: One alligator, two ostriches, and so on. Players get bonuses for being the first to collect enough of an animal and penalties for collecting too many animals. The game allows for players to use trucks that have already been claimed, meaning that rolling more dice (like drawing tiles in the original) isn’t as punishing. In the event that a player rolls things that harm them, they can be placed on an already claimed truck, meaning waiting until later is less risky. I really enjoyed this game 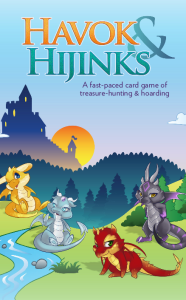 Havok and Hijinks is a game that was on Kickstarter and the cute dragons had me curious about the game. The game play is very light and semi-chaotic, but the game isn’t terribly long and the art is very cute. There is little strategy to the game, but it’s still something that may make it back to the table once or twice more. 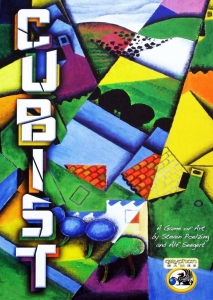 Cubist is a game about abstract art. I’m not one for appreciating art, but I can go along with it for the sake of this game. Players use their dice to build various installations following simple rules. Dice that get stacked must be the same value. Dice that are placed beside other dice must be one higher or lower in value. There is an interesting mechanic where building installations grants dice to be used to build the museum. I really enjoyed my first play, despite the luck of the game kicking my butt handily. 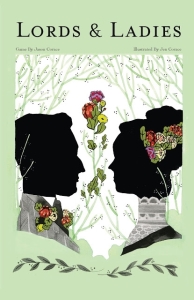 We finished the evening with a game of Lords and Ladies. The rules took a bit to get down, but once we started playing, the game play developed quickly. The three player game is a little too predictable for my liking, but I’d love to see the game with four or five players. The ability to name the lords and ladies in the game is a nice touch, and I can see the strategy changing with more players. This is another game that I can’t wait to try more.

So five new games in one day, and that’s just the tip of the iceberg. If you see a game in my collection that you feel deserves the First Impression treatment, leave a comment below or message me on Twitter, Facebook, or Google+.