Cartographers Heroes launches on Kickstarter today, so let’s check out this new version of a great flip and draw and see if the updates to the maps take you to your destination or have you drive into a lake. 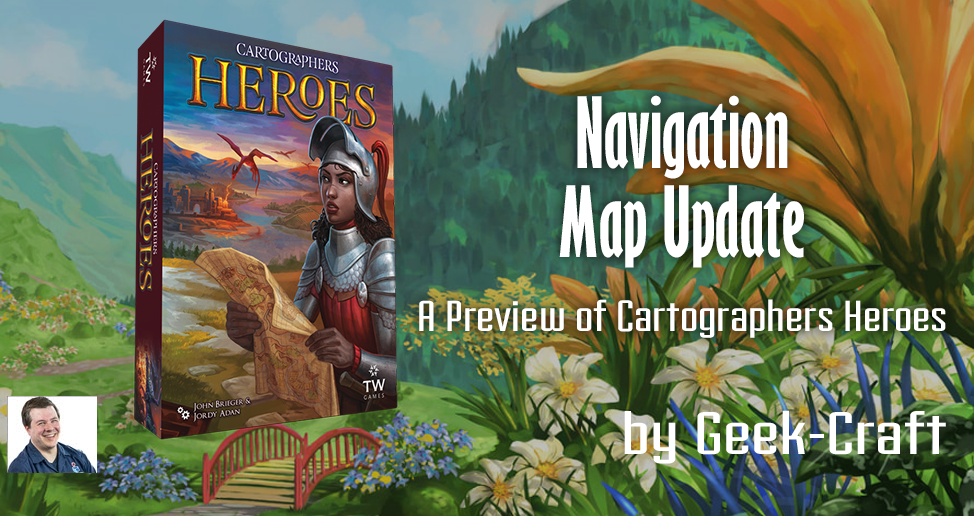 Cartographers is one of the most thematic flip and draw style games I’ve ever played. It’s also really easy to teach, quick to play, and works solo and multiplayer. If you want a full overview of the original game, please check out my full review here.

The quick description of Cartographers is that each player is mapping out the land and trying to meet certain goals. The players share a deck of cards that indicate which terrain types and which shapes can be drawn on their maps. You may be ambushed, in which case your neighbor will add monsters to your map and cost you points. There’s not a ton of player interaction, but the game flows smoothly and quickly.

For Cartographers Heroes (referred to as Heroes going forward), they didn’t change what already works. The game comes with new shapes for the terrain types and two new map layouts, easy enough for new and old players alike to understand. If it’s not broke, don’t fix it. 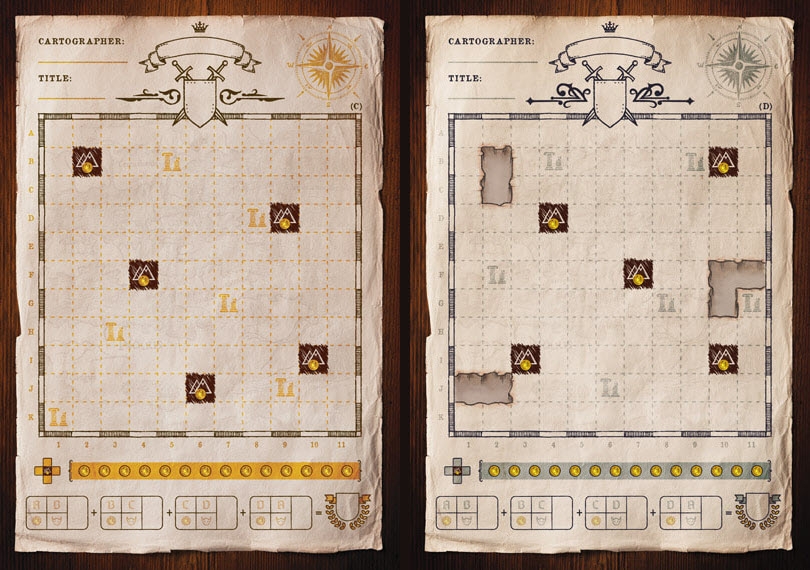 There are no Ruins cards in Heroes, which took me by surprise. They’re still on the map, but they aren’t referenced at all. This makes sense, though, as Heroes is standalone and you can use the Heroes maps with the original cards or vice versa. It felt a little odd at first, but I like that it changes things up a little.

The two big differences are with the monsters and the addition of heroes. You’re shocked, I can tell. The Ambush cards work just like in the original game. However, this time each of the four types has something special that they do. The Zombie is a single square, but after scoring, it infects each square that is adjacent to it, spreading across the map if left unchecked. The Dragon takes up five spaces, but is worth three gold once dealt with, which is a nice bonus on top of no longer losing points. On top of the normal way to deal with monsters, you now have access to Heroes. Each hero takes up one square and attacks three or four nearby squares. If there are monsters in those squares, they are destroyed and marked with an X, but if a monster is still on other squares, they’re still active. They are considered filled, but do not have a terrain type. If the space is already filled with something else, like a Farm or Village, nothing happens. Heroes are a great way to fill in those odd spaces and they work well for dealing with monsters faster than simply surrounding them.

One of the weird things, thematically, is that if you draw a hero before there are any monsters, the hero “sets traps” in certain spaces and if monsters end up there, they’re dispatched immediately. This kind of makes sense, but in a multiplayer game, it feels like a disappointment as the opposing players will simply do their best to not put monsters in the trapped spaces. In solo mode, as the monsters come on a pre-planned route, it can be easy to set a trap and make it pay off, which I think works a little better as long as we don’t mind insinuating that the monsters aren’t too bright.

Heroes feels like another game in the Cartographers universe, which is not a bad thing. It doesn’t have a ton of player interaction, but I don’t mind that in this style of game. I have suggested that the publishers include a reference card so everyone can see which terrain types come in which shapes, just to help with some planning, but it’s far from a necessary thing for the game. I’ve also suggested a reference card with the monster patterns and heroes to help remove any experienced player advantages.

If you have Cartographers and want to have some different options without any huge game changes, you can easily get that with Heroes. If you are new to the series, it’s a decent enough starting point, though for introducing new players, I might suggest ignoring the monster abilities, as it can be just a little much to manage for folks who don’t know the game well. I enjoy Cartographers and think that Heroes is a welcome addition to the game. 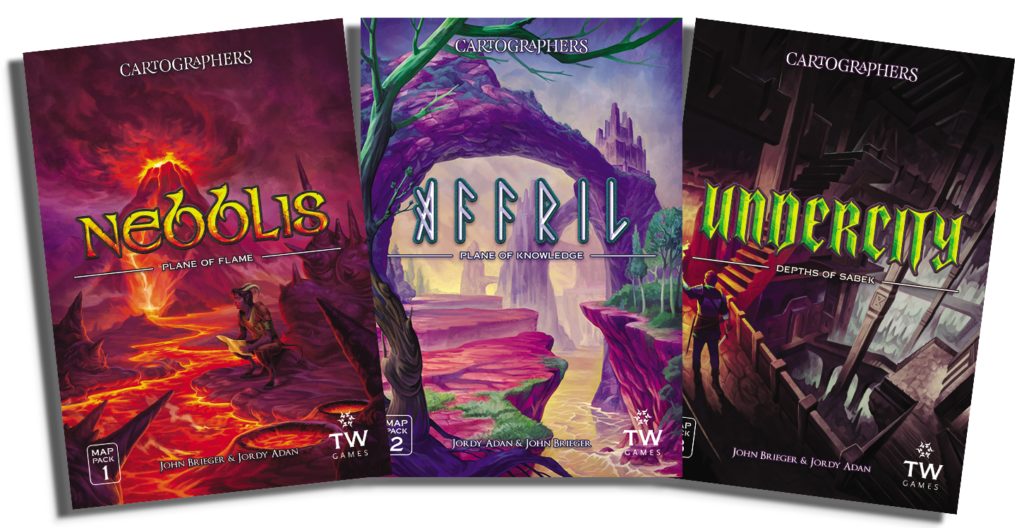 As for the other fun stuff added in this campaign, I haven’t done enough with the Nebblis map to speak to it. However, I can say I’m not a fan of how stylized the names are for the expansion maps. Then again, if that’s my complaint, it’s solid enough otherwise. I think the big box is a nice touch for those who want to store everything together. Personally, I’m happy with the small box for this as Heroes is a standalone game, which means I can take it and / or Cartographers with me and play either or combine them for more fun.

All in all, I think Cartographers Heroes doesn’t change what isn’t broken. If you like the base game, you’ll probably enjoy this standalone. New to the series? It’s a great place to get started. Check it out on Kickstarter now.