Here I am to save the day! – Sentinels of the Multiverse Review

While I enjoy playing competitive board games, there is a part of me that enjoys cooperative ones as well. Working with the other players to solve a problem or beat the game can be a great change-up from the usual “gotta come in first” game play. I enjoy some of the more well-known cooperative games, like Pandemic or Arkham Horror, but I also know that some people have issues with these games because one player can end up telling the others what to do, commonly called quarterbacking, and it turns into a one player game. I feel that Sentinels of the Multiverse does the cooperative aspect of the game very well, and doesn’t lend itself to quarterbacking, as each decision has multiple valid responses. 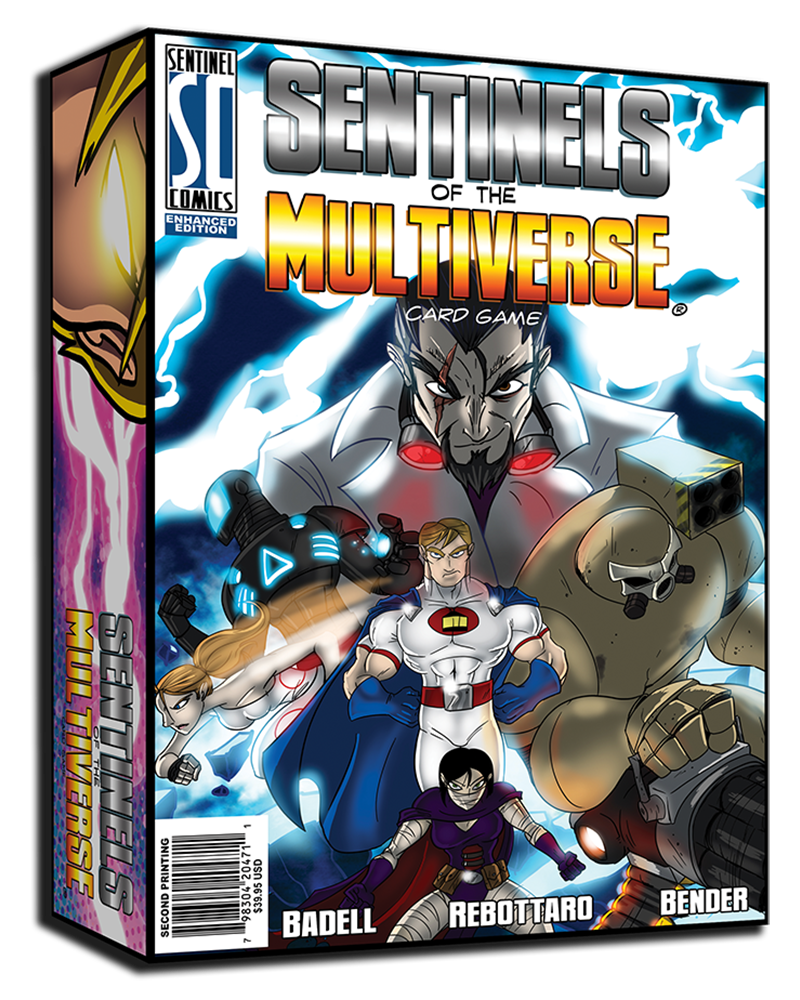 Most people I know enjoy super hero stories, be they comic books, television shows, or the blockbuster movies of recent years. Getting to play in a game as a super hero can be a lot of fun, especially when each hero feels different from the others. Some of the characters in this game are better as supporting characters, where others excel at causing damage.

The game play is rather straightforward, whether you have two or five players. The villain starts the game by doing all start of turn effects, then they play a card from their deck, and then they activate all end of turn abilities. Each player then, in turn, is allowed to play a card, use a power, and draw a card. The cards to be played by the players range from one-shot cards to equipment and other powers. After all players have taken their turns, the environment plays a card and usually has an effect on the heroes, villains, or both.

The different heroes and their cards and powers are really what make the game shine. When I learned the game at GenCon 2012, I played Ra, who is the sun god and likes fire. His default power deals one target 2 damage, but other powers let him prevent damage to the other heroes or cause damage to multiple targets, and his equipment allows him to increase the amount of damage being dealt. 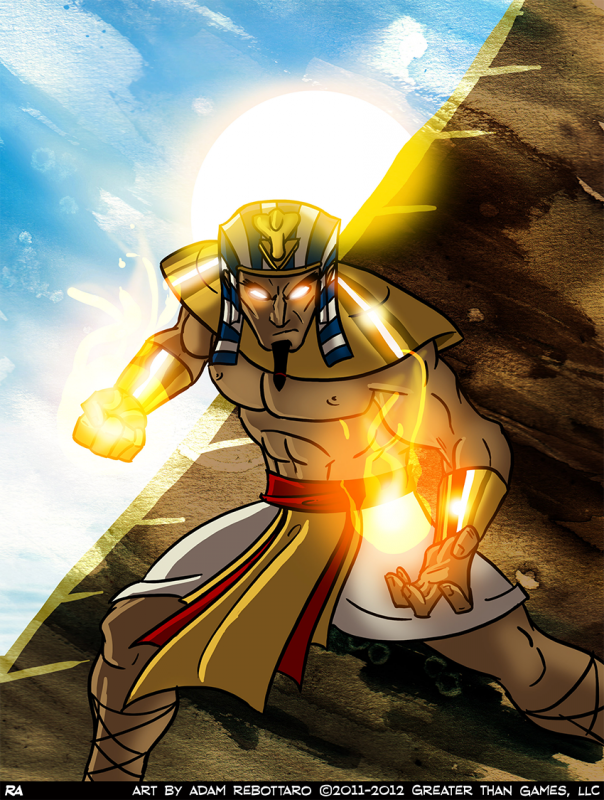 In the rule book, each hero has a complexity rating, ranging from one to three. For learning the game, there are five heroes that are listed as a one complexity, meaning playing that character is something most players can pick up quickly. Some of the other characters, such as Absolute Zero, are more complicated to play, and learning how to take advantage of that character’s damage dealing is more complicated and may take a few games to fully understand.

The rule book also gives each villain a difficulty score, ranging from one to four. Each villain plays different, with some characters playing many cards quickly, where others are more power houses that deal damage frequently. My favorite villain that I’ve played against so far is Baron Blade, who wins automatically if he gets fifteen cards in his discard pile and can use his Mobile Defense Platform to prevent all damage to him.

The different environments can also change the way the game is going. The dinosaurs in Insula Primalis can attack the villain as well as the hero. The Wagner Mars Base can reduce the effectiveness of fire damage, and when you’re playing Ra, this can be a problem for you.

Overall, I think Sentinels of the Multiverse covers a few kinds of games really well. It is a great cooperative game, but doesn’t let one player have all the fun. The super heroes are well done and are varied enough that you’ll want to try them all. The different set up each play ensures that no two games will ever be the same.

Right now, Greater Than Games is running a Kickstarter to get their third expansion printed. They hit their goal of $20,000 in just four and a half hours, so there are a lot of fans of this game. You can get this newest expansion for just $30, pick up some other expansions you haven’t gotten yet, or maybe get the base game and see what all the talk is about. Click the ad below and check it out. If you have any questions about the game, please leave a comment below.

Tags: Greater Than GamesKickstarterSentinels of the Multiverse