All Tied Up – Knot Dice Review

Knot dice is not so much a game as it is a set of components. A number of dice with various patterns as well as some tokens make up the basic kit. How do these games work out or are the dice just toys to get tied up in? 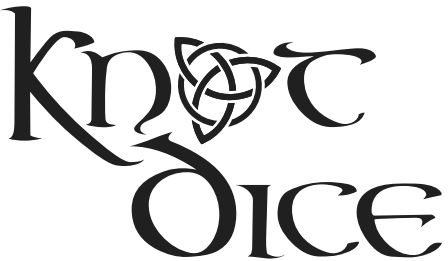 Knot Dice are not a game on their own, but instead are a component for a number of games and activities. Matthew has listed five on the Kickstarter page and I’ve given my opinions and feedback of some of those games below.

Kells is a simple game of fitting pieces together. Players are trying to make as compact a knot as possible while not discarding dice from the game. The final score is the number of dice in the puzzle minus the total of the number of discarded dice and the longer of the sides of the size of the finished knot. While game-like, this feels to me to be more of a puzzle. It’s fun, it’s simple, but overall it’s more of an activity than a game. However, this doesn’t stop me from playing it solo. My first game I got a score of 10. I had to discard two dice and it wasn’t compact. My second game I lucked out and managed a perfect score of 13 – All 18 dice in the knot and it all fit into a five by four rectangle.

Of course, a perfect score of 13 is better. #KnotDice pic.twitter.com/8cbkwz77pl

Kells is good. I enjoy playing it, but I realize it’s more a puzzle than a game. It’s still fun though. Playing it with multiple players was very similar, but with more total access to dice and limited options on each player’s turn.

Distance is the game that caught my eye from the Knot Dice Kickstarter page. The players are trying to distance two pieces they have from each other by building off of a starting set of dice. This is more of a game than Kells, but it’s still light and quick. It’s interesting to see if players will use dice to extend their own movement options or use corners and dead ends to block off their opponent’s options. I enjoyed this and am looking forward to playing it more.

EDIT: It appears that the game I was playing and the game that Matthew was describing are not the same thing. I’ll be pushing to try the real version of Distance before the Kickstarter is done. 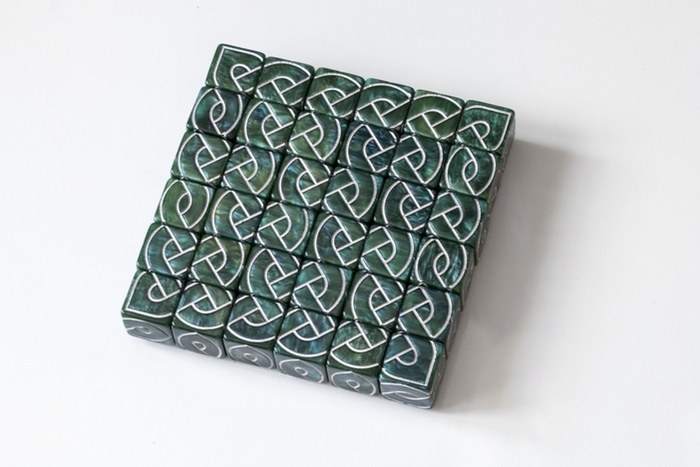 The overall effect of Knot Dice is not one of a single polished game, but rather a set of components for playing a variety of games and puzzles. The dice I was sent are heavy and roll nicely. The linework is well done and while there are a few blemishes, they are prototype versions of the final product. Even with the occasional bit of stray color, the dice are still very impressive to look at and are fun to play with. If you like celtic knots, puzzles, or the sound of any of the games that are listed on the Kickstarter, I suggest you give Knot Dice a look!