I know I’m late in getting this posted, but last week kept me busy. At Origins, I got to play 7 games that were new to me, many of them being unpublished games. I love seeing the games in their prototype stages, playing them with the designer, and providing feedback on the games.

On the day we arrived, Michael Coe from Gamelyn Games contacted me about my Kickstarter copy of Dungeon Heroes, as well as a new game that he’s working on called Fantasy Frontier. He said that the game has more to it than his other games, which intrigued me. We (my girlfriend and I) sat down with a friend and one of Michael’s friends and played a full game. 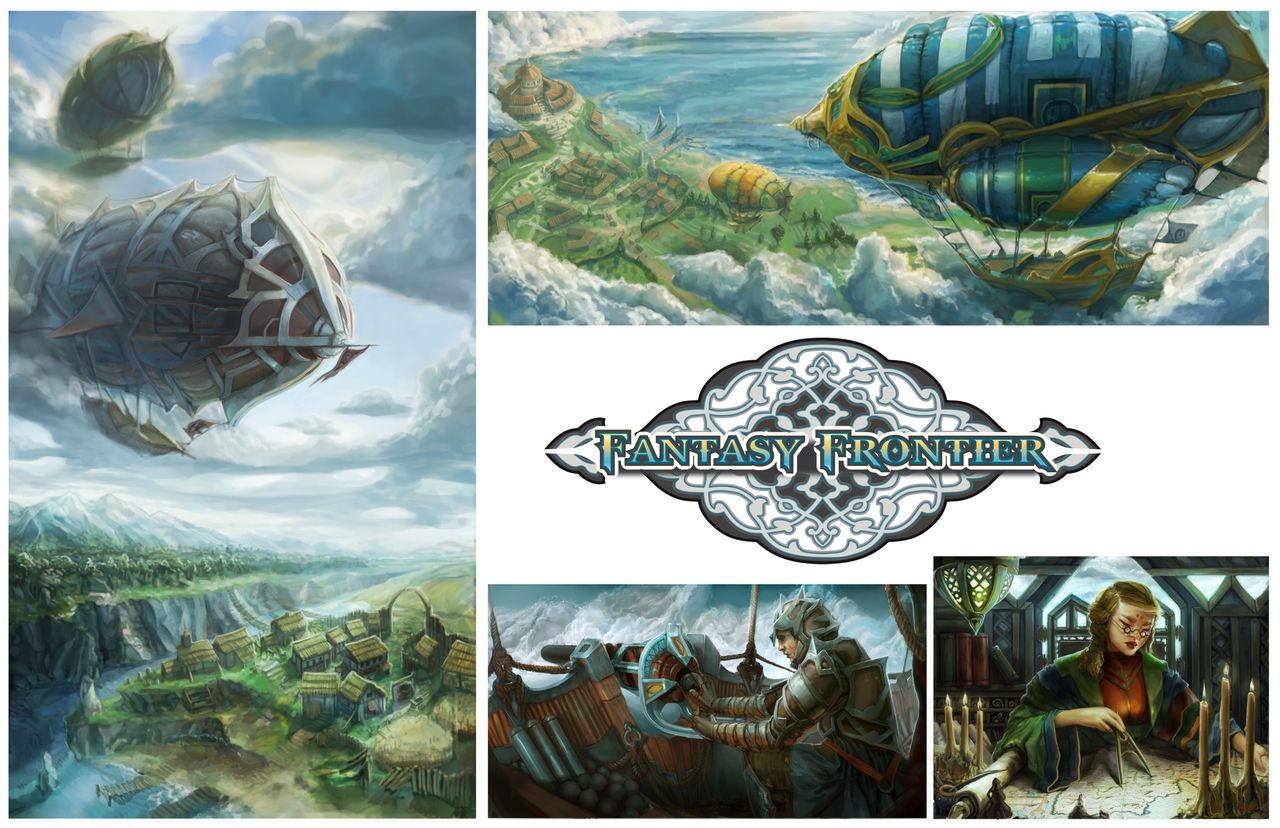 The game is certainly bigger than anything else he’s done, but Michael really has put together an interesting game. It has some worker placement, some pattern matching, some resource and hand management, but when it all comes together, it shines. The main complaints about the game were that the tiles weren’t different enough colors and that a player aid needed to be created. Michael was very receptive to feedback and has said the colors are being worked on and that the player aid was also in the works. You can see more art from the game on BoardGameGeek.

On Thursday, after a day full of demoing, we stopped by the Board Room, which has a library of hundreds of games. I like Fluxx, and really wanted to check out the Fluxx Boardgame that’ll be coming out soon. We only did one game, and I can see it actually working with groups that really go for Fluxx. Unfortunately, it felt a little too complicated for what it was. I’ll still give it another shot at some point in the future.

Black Spy is a trick taking game from Z-Man games. While I’m normally a trick taking fan, this one seemed to be a little more chaotic than I’d normally like. I would like to try it again with more players, but it felt like most of my plays were decided beforehand, as you have to match color or number of the lead card. It was still fun, but I need to try it again before I make a final decision.

Croak is a game of frogs from Iello where the goal is to be the last player with frogs on the table. There are 64 tiles laid out with different backs. When you move a frog onto a tile, you flip it face up and do whatever that card’s art means. Some will make you move again, others will make you move another of your frogs this turn, and there are a few fish that eat your frogs. There’s a lot of luck to the game, but it’s light and easy to learn with enough strategy to make it fun. I really enjoyed our game of it and may pick it up in the future.

On Friday we went to the UnPub again and Chris from Cardboard Edison was there. I had met him earlier in the day and he said he had a prototype that he’d like me to try out. Tessen was a blast to learn and is one of the game I am really looking forward to getting once it’s up on Kickstarter. It’s a two player real time card playing, set matching game. The prototype art looked really good, but could be confusing with the rapid fire play. Chris showed me some of the revised art, including the Warrior shown below. 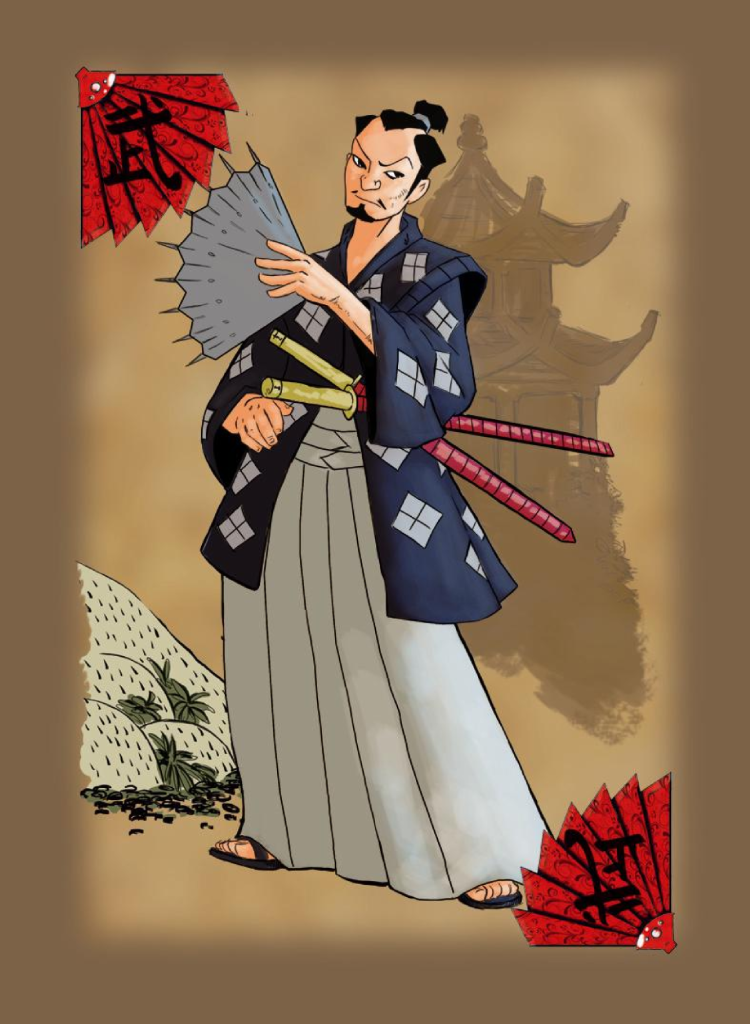 Games are short, only a few minutes long, but there’s a surprising amount of strategy in the game. Look for a full review in the coming weeks. Until then, follow the game on BoardGameGeek.

VivaJava: The Coffee Game: The Dice Game (shortened to VivaJava Dice) was something I had to try, as I love everything that Chris Kirkman from Dice Hate Me Games produces. I’ve played VivaJava with the creator, T. C. Petty III and enjoyed it, but also realized that it’s a slightly longer game that needs a fair number of people. 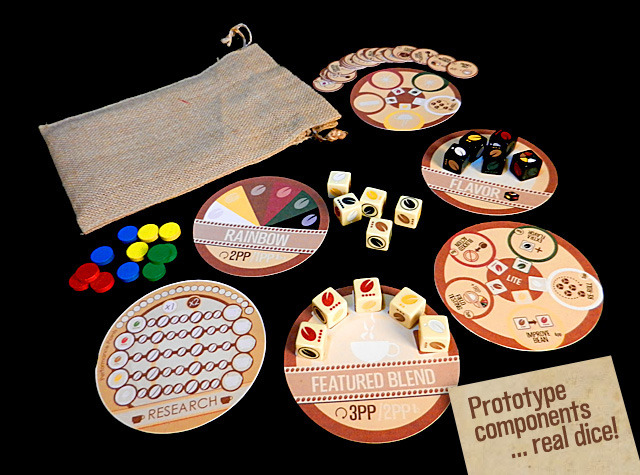 VivaJava Dice requires less time commitment and fewer players, but still feels a little like the original game. I thought the game was a great balance of strategy and luck, and the prototype dice that were at Origins were absolutely amazing. The game is currently up on Kickstarter and has already funded in less than four days! Back this great game and help the project reach some stretch goals!

Clippers was the last game I played at Origins, and it’s a trick taking game based on running a barbershop created by Jason Kotarski, known for The Great Heartland Hauling Co. I liked the way the game worked, but I also found some issues with it. Jason was very receptive to feedback and I’m sure he will refine and polish his game.

Overall, Origins was a great time. Getting to play all of these new games is a major part of what keeps me going back to Origins every year.