Gen Con 2015 was the busiest, craziest convention yet. With this many attendees in the Indianapolis Convention Center, it was more crowded than I’ve ever seen. Despite the issues leading up to this year, including the Religious Freedom Act and the housing lottery problems, the show was a huge success.

There were a few things different about Gen Con this year for us. This was our second year attending as press, but we did things a bit differently this year, focusing more on appointments with various publishers, getting to see new releases and talk about games in a more structured manner. It was also a bit of a strange year as I don’t feel there was one “must have” game that was on everyone’s list. There were a lot of new, very cool games, but it seemed they were all getting a lot of love instead of everyone hunting down copies of a singular title. I actually think that this was an improvement for the convention, as it resulted in more people talking about more games.

While a large portion of my convention was spent talking to companies and hearing about upcoming releases, I did get to spend some time playing games.

On Wednesday, we arrived and got checked into our hotel room. I had brought along a few games to play, including Flip City. I taught the game to Sam and Simon, and I ended up winning due to a large number of Central Parks. Afterwards, my friend Simon showed us a game called Karate Fight. The art is far from subtle and the gameplay is similar to Egyptian Rat Screw, if you are familiar. Lots of card slapping and watching for repeats. The game is listed as a fifteen minute game and the goal is to collect all of the cards. However, Sam and I are both very competitive and it ended up taking about an extra hour as we would both drop in cards, then fight back, then drop again. I ended up winning, but only barely, as I was down to only three cards at one point.

Later that evening, I went to hang out with some friends. I taught Fidelitas to A.J. Porfirio of Van Ryder Games and some friends he brought along. I enjoy the way that Fidelitas works (as you can see in my review here) and it was great seeing A.J. and teaching him the game. He brought along Wild Cats, a social deduction game. Most social games aren’t my thing, and Wild Cats is another game on that list. I see where it could be fun, but it’s just not a game for me.

Thursday was the first real day of Gen Con, and the convention center was packed. We did a lot of walking around, exploring booths, and seeing friends. Simon set up an appointment for us to play Legendary Encounters: A Predator Deck Building Game. We tried the Alien version at Gen Con 2014 and enjoyed it a lot, but this isn’t just the same game with a new theme. In Alien, it feels like the players are separated but are still able to communicate, while in Predator there’s a sense of teamwork and finding your fellow players in the jungle. While based on the same system, the games feel different enough to warrant owning both, especially if you’re a fan of the movies. Later that night we went to hang out with the DFW Nerd Nighters, and while we didn’t stay too long, it was a huge event and is certainly something to watch for next year. We met up with Michael Coe at that event and we went off to try a Tiny Epic West prototype. While the components were prototype quality, the game play was very well done. It’s certainly a deeper game than others in the Tiny Epic series, but it is a worker placement western themed game. It was very enjoyable and I can’t wait to see the finished design.

Friday was busier yet than Thursday, and we spent the day re-exploring the hall to see things we knew we’d missed. I picked up some games from the BGG Flea Market sale, including Skyline. It’s a city building, dice rolling game that while the rules aren’t 100% clear at first, the gameplay is interesting and fun. I can see this making it to the table more often. We played Between Two Cities as well as a work-in-progress expansion for the game. I enjoy the base game and the expansion felt like a natural extension, so I can’t wait to see that come out.

Saturday was busy with more appointments and such. We got to play more Skyline, and we picked up Arcadia, a game about making an amusement park. My friend Phil Chase helped co-design the game, and the way that the game feels is interesting. You play over four years, and while the first year the game feels really long. It takes a while to get through the deck of attraction cards. However, by the fourth year in the game, players will want just one or two more rounds to get everything together.

On Sunday, we spent time visiting some last minute booths, searching for some end-of-convention specials. After having dinner with some friends, we went over to the hotel and played some last minute games with friends. Heat is a heist card game from Asmadi and the gameplay is fun and thematic. Trying to out-think your opponents is a part of the game, and the way that the players are punished for taking too much heat is well done. New Salem was also a last-minute pickup and it’s a social and drafting game. As I said earlier, social games aren’t really my thing, but with the addition of drafting and investigating, the social portion is limited and I enjoyed the game play, even if we didn’t get all of the rules 100% right for our first game.

One of the great things about Gen Con is all of the walking that is done at the show. If you’re looking for a good bit of exercise, walking the halls can certainly provide it.

To say that I brought home a few games would be an understatement. The ThingLink image below, while not being 100% clear, labels everything shown in the picture so you can see and get links to BoardGameGeek for everything here. 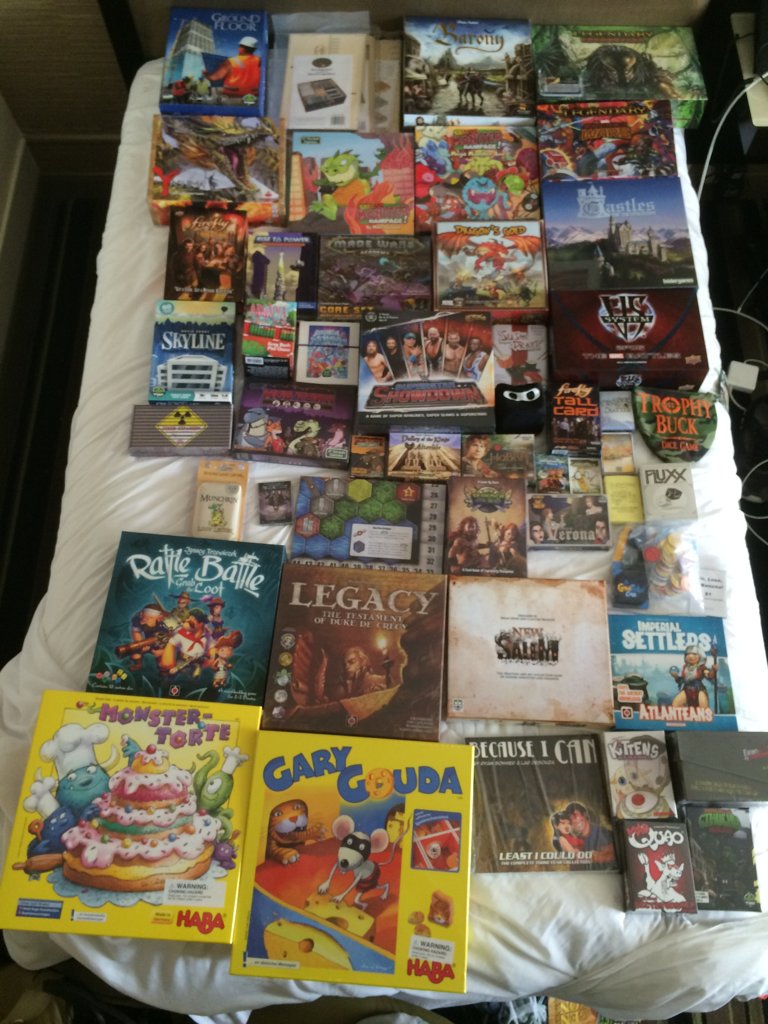 Watch for reviews, previews, game discussions, and giveaways coming up soon on Twitter, Facebook, Instagram, and YouTube. I’ll also be running events at my FLGS for a number of games and companies. If you’re looking for a review or preview of something in particular, let me know, as I’d love to talk about what you want to see!