I’m not normally one for resolutions, but the plans for this year do fall nicely into the same kind of pattern as resolutions. We’ll see how well everything goes by the end of the year.

The big change this year is that my girlfriend and I plan to attend PAX East, Origins, and Gen Con as attendees or media members instead of volunteers. We haven’t had a convention that we didn’t volunteer for in years, so we talked and decided that this year, we’re going for us. If you’re going to any of these conventions, let me know and we can meet up, hang out, and play some games. If you have a game you’d like me to check out at a convention, that can also be arranged, just ask Chris Zinsli, better known as @CardboardEdison. He showed us Tessen last year at Origins and we gave him a lot of feedback that helped the game become what it is today.

One of the things I want to do this year is play more new games, both at conventions and at home. I have several games that I’d like to try before I go and order them, such as Legendary. I have many games on my Want to play list and I’m sure that more will come out this year. Spending time at conventions in the dealer hall and free play areas should help with this goal. I also hope to actually some game days at my house or friendly local game store with my friends so that they can bring over games and we can play together.

Another goal this year is to play more of the games that I own but haven’t gotten to the table. I try to keep up with logging my plays on BoardGameGeek and have for a few years. As of right now, I own 677 board games, excluding expansions. I show that I’ve played 390 total games, and that includes ones I don’t even own! If we include only games I own and have played, the number drops to 280. Even if I am missing play logs for 20 games, this means that I haven’t played over half of the games that I own! Please go through the list of games that I own and haven’t played and tell me what desperately needs to make it to my table! 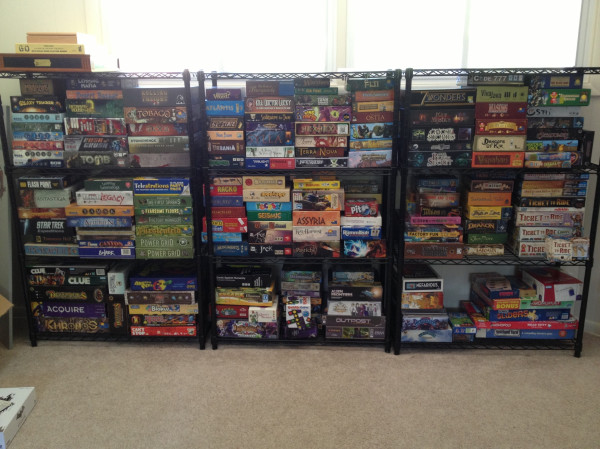 I’m also looking to sell the games that I just don’t play anymore. I love the hobby, but I have to recognize that the space I have for games and the amount of space I need for the games that I have are not equal. Look for some kind of auction on BoardGameGeek later on in the year.

Finally I’d like to do some revamping of this site. Clean up some of the layout, add pages for each company that I volunteer for, work on a better calendar. Nothing too big, but enough that it’ll take time and effort.

Those are the gaming plans for this year. Play more games more often is going to be the mantra for 2014. Now to see how it all plays out!