A Realm by Any Other Name – A Review of Marvel: Remix and Star Trek: Missions

I enjoy a variety of games from highly strategic to chaotic and silly. Fantasy Realms falls somewhere in between with many unique cards and lots of combos for points. Now there’s a Star Trek and a Marvel take on the game template. Let’s talk about these follow-ups and how they match up. 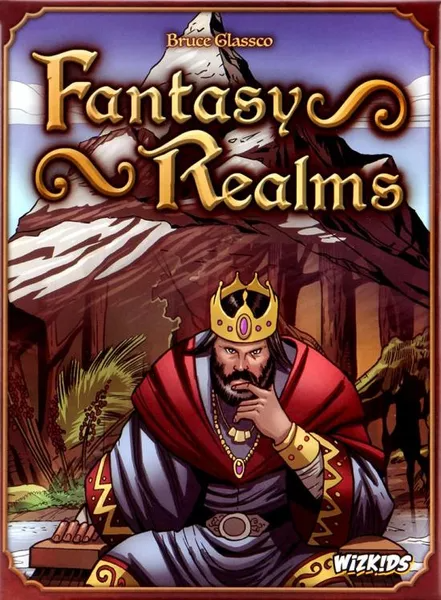 Fantasy Realms is a lovely filler game with enough going on to be interesting but not too much that you have to invest too much time or thinking. To quickly cover the game, each player is dealt seven cards from the deck of 53. Aside from three wild cards, every card is unique and gains or costs points based on other cards in the hand. On your turn, you’ll either take a card from the discards or the top card from the deck, then you’ll discard a card. All of the discards are available to take, so you have access to any card that has been discarded during the game. Once there are ten cards in the discard area, the game ends and each player totals up their hand.

There are many combos in the game and the play is all about trying to maximize your score without taking too long to do so. For example, let’s say you have the following two cards in hand. 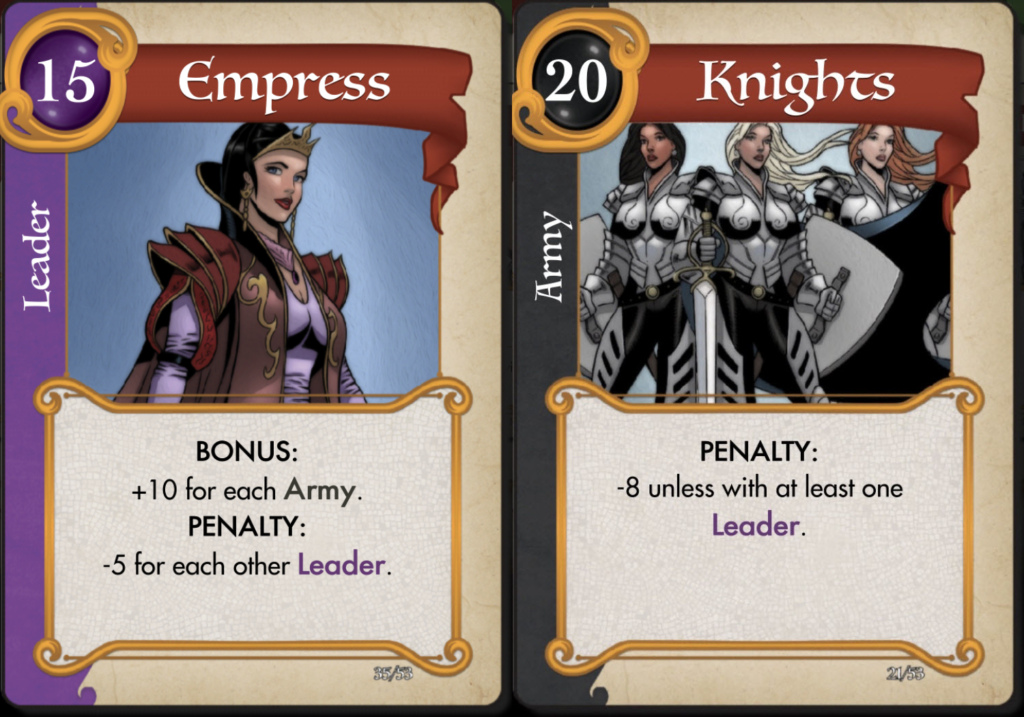 The Empress is worth 15 points, and an additional 10 because you have an Army. The Knights are worth 20, and you don’t get the 8 point penalty because you have a leader. If any of the five other cards are leaders, you’ll lose 5 points for each of them from the Empress, but they may be worth keeping if they combo well with the other cards. Because each hand is 7 cards, Wizkids has released an app to help scoring as things can get complicated. It’s certainly not required, but it’s a nice tool to have if you’re having issues with figuring out the best way to handle the cards you have.

It’s never going to be my favorite game, there’s too much chaos and randomness, but I do enjoy it as a filler or lighter game because it’s fun to pull off the huge combos or see someone else get the perfect setup. 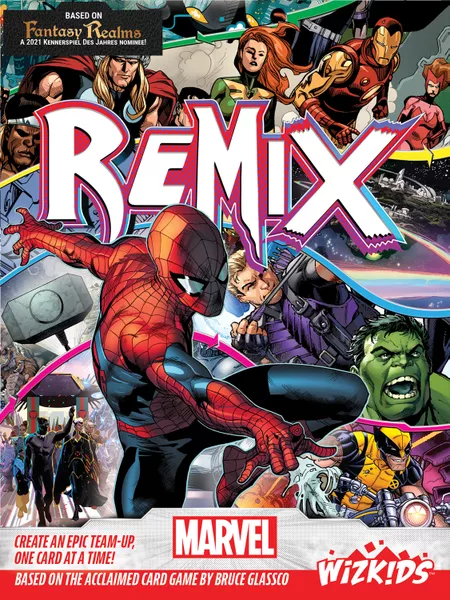 Marvel: Remix takes this setup and adds some changes to help make it more unique. First, there are cards that transform. Tony Stark into Iron Man or Bruce Banner into Hulk, for example. This changes the points they are worth and the icons they provide for other cards. Cards frequently give points based on how many icons are present in the hand, which I find a better fit for the theme. Rather than just “+10 for each Hero”, cards like Throw Car give bonuses like “+14 with both STRENGTH and Location with CITY“. At the beginning of the game, you’ll get dealt six Remix cards and one Villain card. At the end of the game (the same 10 cards in the discard trigger) if you don’t have at least one Hero or Ally and a Villain, you’ll score zero points. 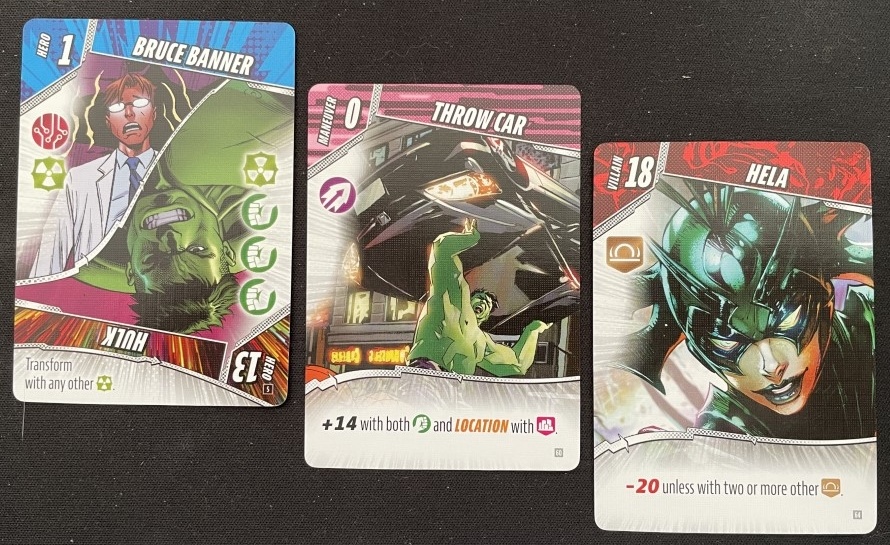 The end result feels like you’re making a comic book, though some of the combinations are silly. The app doesn’t cover this game for scoring, but it’s still not difficult to score. The different characters and tropes fit the game very well, and ending up with a story makes more sense than just random items and people in Fantasy Realms. However, it’s harder to plan in Marvel: Remix. In the original Fantasy Realms, there are five of each type of card, meaning you can set expectations. But in Marvel: Remix, if you get Bruce Banner, you’ll likely want another GAMMA symbol so he can become Hulk. However, there’s no real indication as to how many of them there are. Three Remix cards and two Villain cards have the needed symbol, but the game doesn’t tell you, which can be frustrating. But even with that hiccup, the game is still fun to play and if you’re a fan of the MCU, it’s a fun pickup that you can use to introduce non-gamers to hobby games. 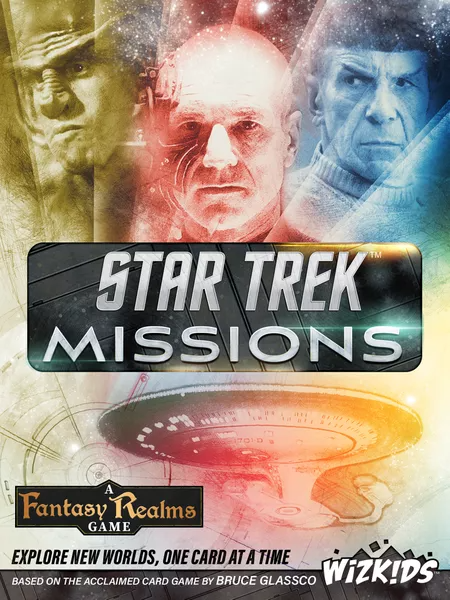 Star Trek: Missions is another new game based on the Fantasy Realms ruleset. Like Marvel: Remix, it has two different kinds of cards. There are 50 Galaxy cards, which are like the cards in Fantasy Realms. There are also Mission cards, which function similarly to the Villain cards. At the end of the game, if you don’t have exactly one or two Mission cards, you’ll not get any points. As a big Trekkie, I was very excited about this one. Unfortunately, everything that Marvel: Remix does right, Star Trek: Missions seems to not do as well. First, all cards are not worth any points unless there are other cards, which means the focus shifts from wanting combos to needing them.

First, no cards are worth points on their own. They all require other cards to score you points, which means the focus shifts from wanting cool combos to needing them to win.

There are icons, much like in Marvel: Remix, but there are now also different categories for each icon. For example, a green specialty icon will have text after it listing the focus of the card. While I understand the diverse cards and allowing for many options, the extra text clogs up the cards a little. As every card is no longer worth points, they all have text at the bottom explaining how they generate points. Finally, the stills from various Star Trek properties have been hit with a rainbow of color, which means they all kind of look the same. 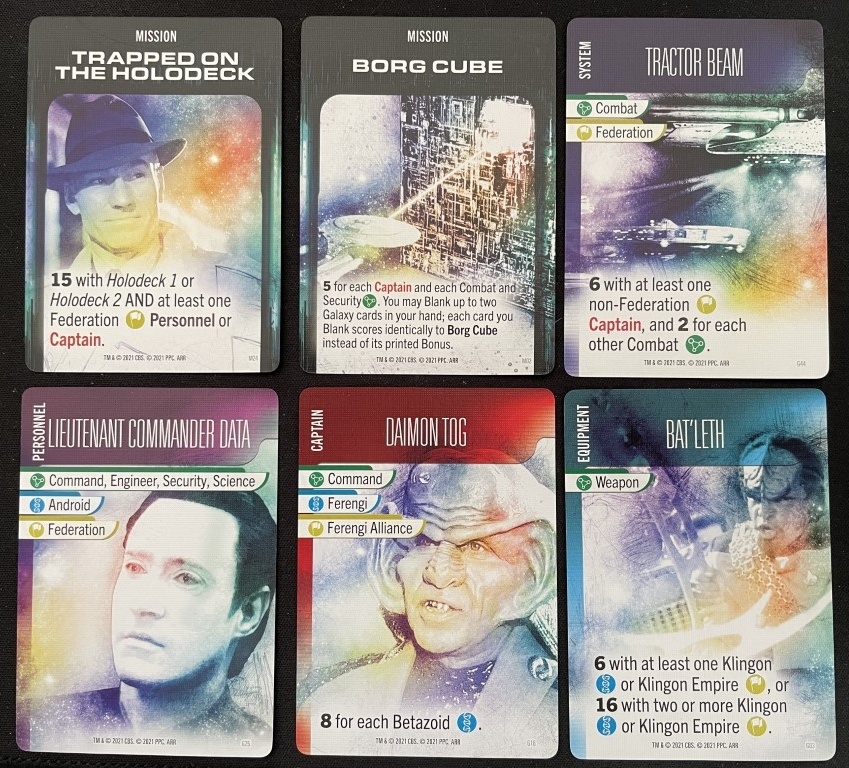 Another issue is that the colors are not as consistent as I would expect for a single game. You can see the shade differences below. Obviously, this is not the end of the world, but it screams that attention wasn’t paid during the proofing process.

Finally, there are several arguably missing pieces of information. Combat is a specialty icon, which is fine. The Bridge of the Enterprise from Star Trek: The Next Generation has that as a specialty. A bit odd, but acceptable. But of the five Klingon lifeform cards in the game, only Worf has Combat as a specialty. The Transporter has the Federation affiliation, which kind of implies that no other races have that technology. Geordi La Forge has Engineer as a specialty, but that’s it, while Data has Command, Engineer, Security, and Science. It just seems like the designers picked the traits they wanted for cards instead of aligning with the events and history of the show. I’m not saying this is bad from a strictly gameplay perspective – the traits need to be balanced and make sense among all of the cards. But as someone who is a big fan of the series, there were many cards that I personally disagreed with for traits.

Fantasy Realms is a solid light card game with lots of chaos and randomness. Marvel: Remix is a fun take on that same formula and it tweaks the game in new and interesting ways. Star Trek: Missions also changes the formula, but it doesn’t feel as successful. If you’re a fan of Fantasy Realms, both of these new entries are worth checking out. If you can only get one of the three games, I’d pick Marvel: Remix over the others for its balance of theming and gameplay elements.